Vehicles are in a constant state of evolution. It seems like nearly every day there is some new feature coming out, or new information that gives a fresh perspective. It really keeps things interesting for those of us working in the automotive field.

The shop I work in is in a city with close to 300,000 people, but we have a lot of rural area surrounding us. This market segment gives us a good mix of older vehicles as well as some fairy late model ones. Today we are working on a 2016 Kia Optima.

This car is equipped with a 2.0 turbo-charged 4-cylinder engine and an A6LF1 transmission. The vehicle has a little less than 70,000 miles on it and appears to be in good condition. The owner of the vehicle came to us with concerns about how the transmission shifted. The customer stated that when cold, the car would engage very aggressively into reverse, and when going forward it would feel like it lacked power. The customer also stated that once the vehicle warmed up it would shift normally.

The gentleman with the car wanted to see if we could get an idea of what might be happening while he waited. Since it was a cold issue we were not sure if we would be able to duplicate the concern, but we wanted to try. We pulled the Kia in the shop, did our normal underbody inspection, hooked up the scan tool and checked the fluid level and condition. This transmission does not have a dipstick, instead the fluid level is checked via a plug in the pan on the side of the transmission, which is facing the front of the vehicle. (Fig 1) 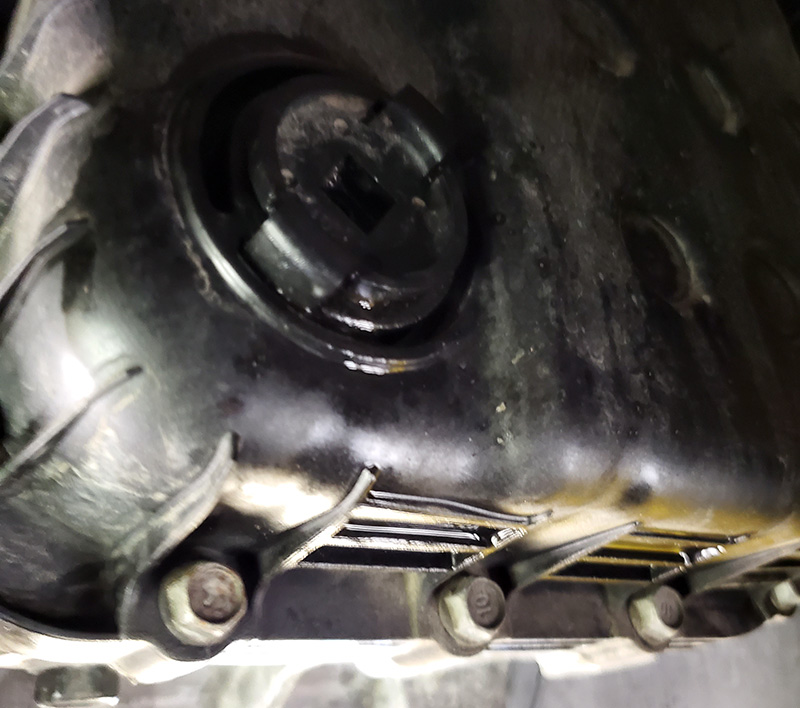 With the transmission at approximately 140°F, the fluid should just trickle out of the overflow plug. In this case, the fluid level was full and in good condition for having 70,000 miles of use. Upon checking codes, we pulled code P0880 from the system. This code is defined as a TCM power signal error. I have seen this code before but have not experienced it on a vehicle that was this new, so I pulled up some info for the code and began to research it further.

The next day we hooked up the scan tool and started the car. Sure enough, the transmission engaged extremely hard into reverse. When trying to move the car forward it was clear that it was in limp mode, which was what the customer was describing as lack of power in forward gear.

Since I was not sure how long this window of opportunity would last (the car was quickly warming up), I quickly got the car in the shop and started following the diagnostics. I started by checking the wiring looms and connectors for signs of damage. There was nothing there that looked unusual. I checked battery connections, alternator output and ripple, and all checked out normal. Next, I went to the PCM and inspected the pins for corrosion and looked for backed out pins, but nothing was found to be out of the ordinary. (Fig 2) 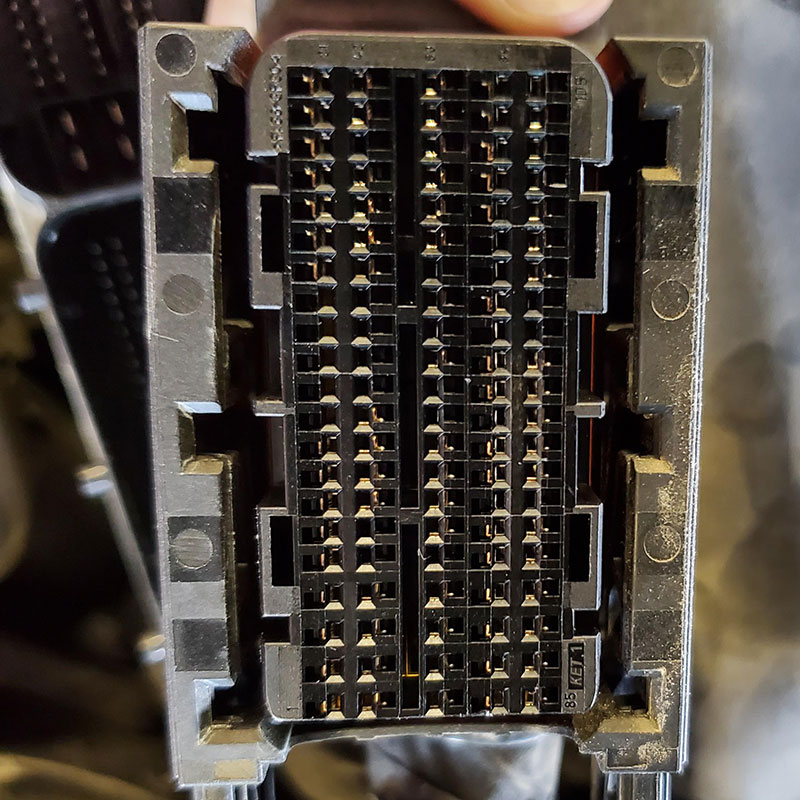 The code description says this code says it relates to a power signal open or short. Pins 64 and 85 power the solenoids in the transmission. Testing at the PCM connector confirmed power at these pins. (Fig 3) 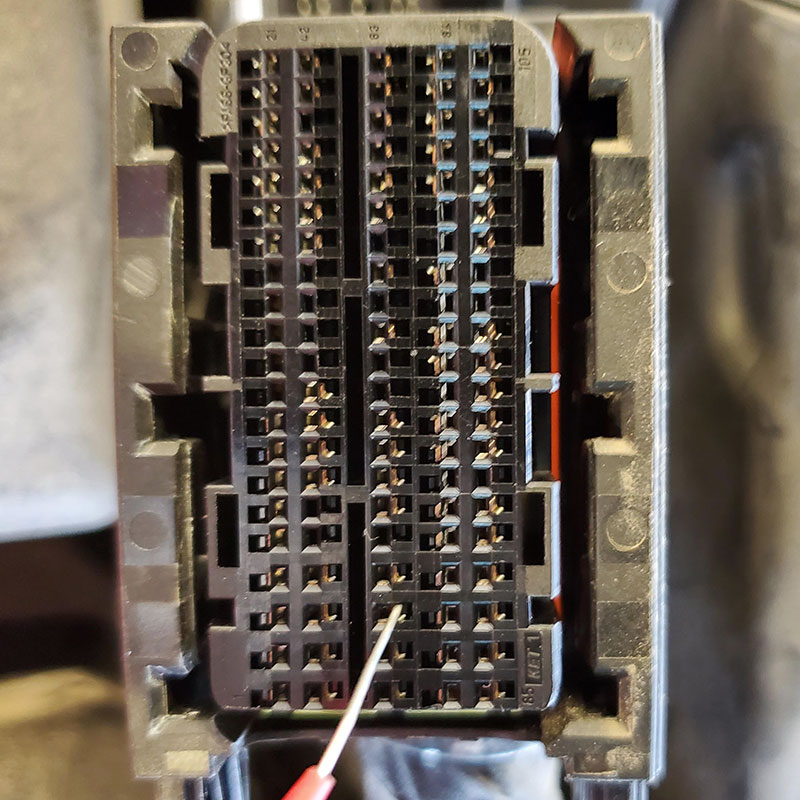 Grounds were confirmed next, going between pins 45, then 46 and chassis ground. Next, the PCM was plugged in again and the battery reconnected. I continued by disconnecting the transmission case connector to confirm the two power sources that were checked at the PCM were present at the transmission as well on both pins 5 and 10. (Fig 4) 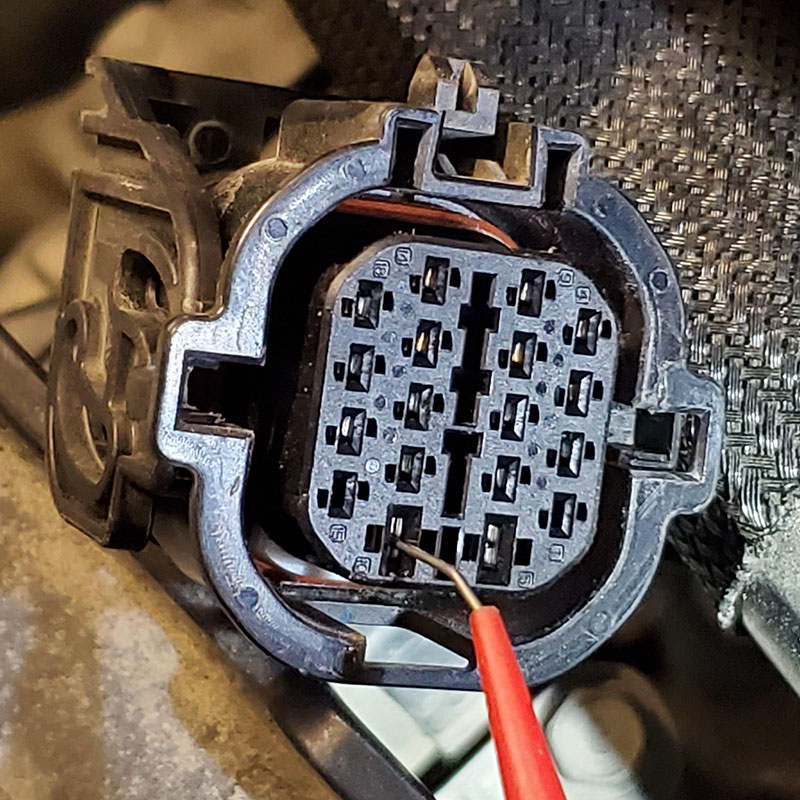 Now that connections, B+ and grounds were confirmed, I needed to see if the solenoids were responding to commands. I went through each solenoid one by one, commanding each one on and off with the bi-directional control on the scan tool. A couple examples are shown in figures 5 and 6.

In the end we confirmed that rather than this being a "cold" problem, it was actually more of a "time" problem. If the car sat for awhile (not necessarily until it was again cold), the concern could be duplicated. After verifying everything stated above, and by confirming that the scan data was indeed correct by confirming this with an amp clamp indicating that the readings did not differentiate between when it set the codes and when it did NOT set the codes, it was determined that the PCM itself had an internal failure. Due to the age and mileage of the vehicle, we talked to the dealer and found out that the PCM may be covered under the emissions warranty, so we referred the customer back to the local Kia dealer and they did replace the PCM under a factory warranty which in fact did fix the customers concern. Needless to say the customer was very happy, he came in expecting a transmission replacement and ended up getting a warranty repair done for just a small diagnostic charge.

I will be curious to see if this will end up being a more common failure as these vehicles age and we start to see more of them coming into our shops. Only time will tell.