A while back I had a truck that came into our shop for a noise concern. The customer stated that he heard a loud clunk or repeated popping noise when he would accelerate with the truck in automatic 4x4 mode, as well as in 4x4 high and 4x4 low. He also stated that he didn't notice the noise under light acceleration in these modes, and that the noise was not present when he was in 2wd under any type of acceleration. The truck was a 2009 K1500 Silverado with a little over 83,000 miles on it. Upon reading the description, it sure seemed like I had a transfer case problem to look into.

I started with a road test to see if I could duplicate the customer concerns, and the truck responded just the way the customer described: it would make a repeated rhythmic clunk or pop noise under medium-to-heavy acceleration that that could also be felt in the floorboard, but only in the four-wheel drive modes; nothing at all in two-wheel drive. I also noticed that even in the four-wheel drive modes, it would NOT make the noise when backing up, even under harder acceleration. I later found out that this would be one of the clues given that helped me solve this problem. This noise was fairly loud and you could really feel it in the truck when it happened, so at this point I still thought it would likely be a transfer case problem.

The first hurdle had been cleared: I duplicated the symptom! Now on to figuring out what the source of it was. I took a sample of the transfer case fluid, and while it didn't look great, there wasn't enough evidence to condemn the transfer case. What about the tires? Whenever I have an all-wheel drive or four-wheel drive vehicle come into the shop I try to make a habit of checking the stagger of the tires on all four corners, making sure that they are very close in actual size, not just looking at the size stamped on the tire. All of our shops have a tire stagger gauge: 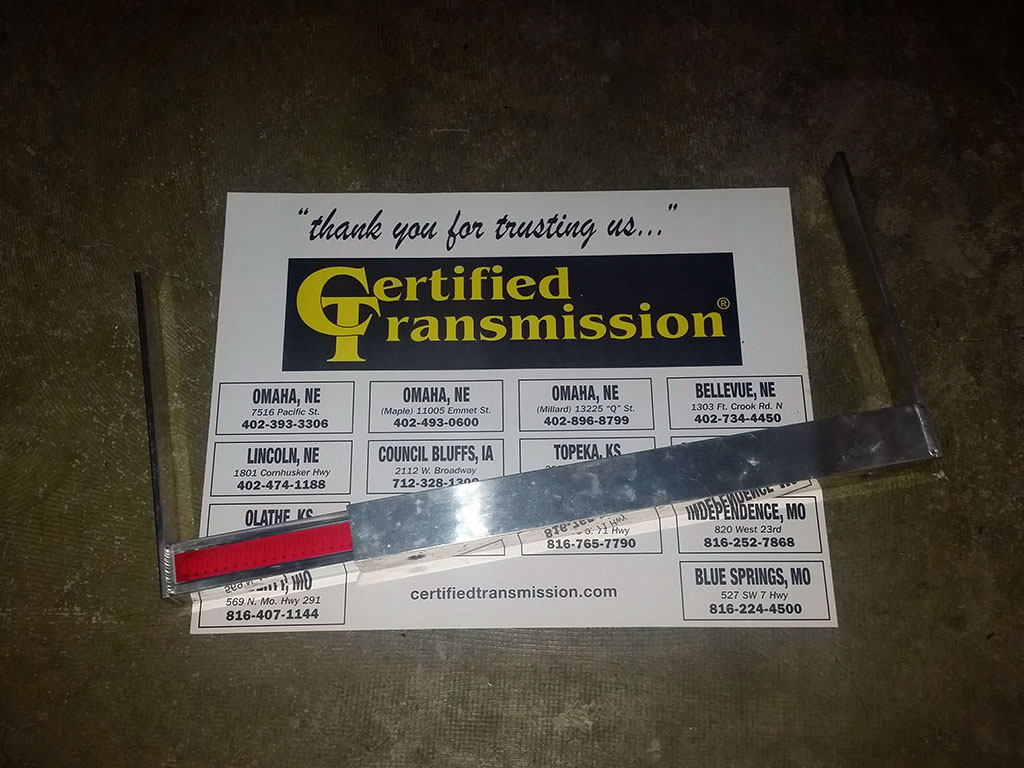 While it is not accurate enough to provide a "tire rollout" spec, it does make quick work out of determining a stagger issue. Too much difference in circumference due to wear can cause all kinds of noise and bind up issues. These tires were 1? different from the largest to the smallest, and really didn't look like were rotated often if at all. I explained to the customer our findings and suggested that he start by having the tires replaced, as they were out of spec and I had seen problems with noises and bind ups cured with properly staggered tires. The customer stated that they were planning to replace the tires soon anyway so he agreed to start there. I asked them to return with the vehicle so I could confirm if it did or didn't fix the problem.

The customer returned with his truck and I went for a drive again, going through the same procedure as before. It didn't take long to discover that the symptom was still present. A drive-on pit at our shop makes quick work of doing a visual inspection of the underside of the vehicle. There were no obvious drive shaft problems with the front or rear drive shafts, but I did notice some slightly abnormal movement out of the passenger front axle area, where the flange comes out of the differential and bolts to the cv shaft. This would be my second clue along the path of diagnosing this noise.

This inspection showed us signs of metal flakes that had settled to the bottom. Next, I looked closer at the axle flange: 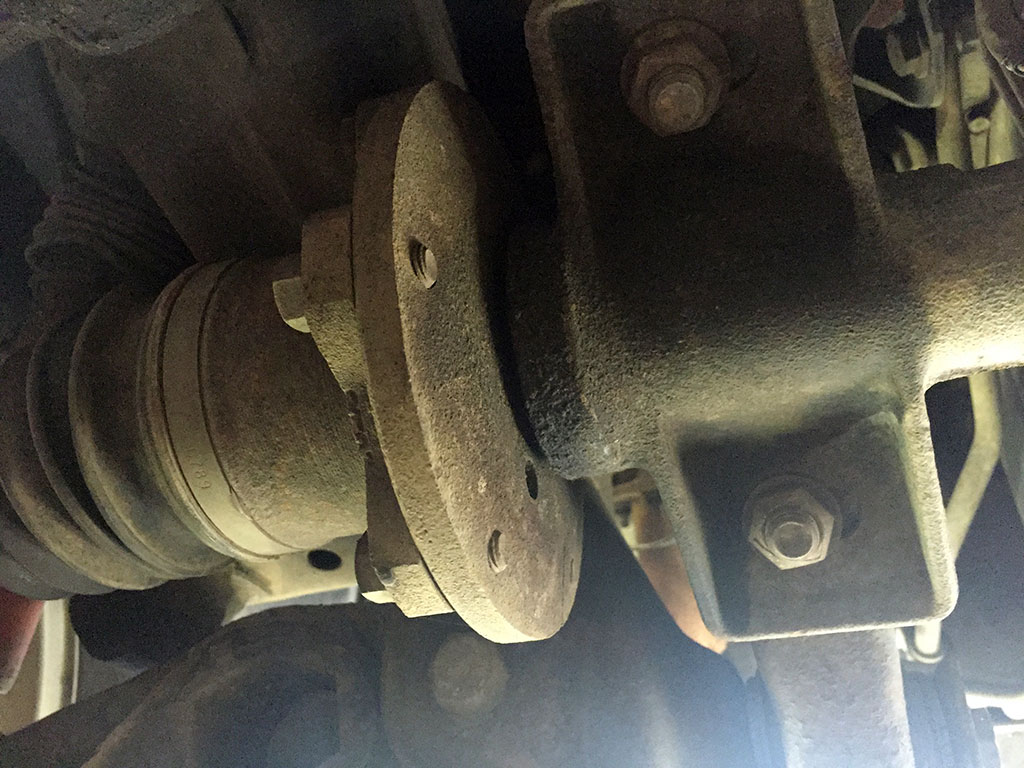 I rolled the truck in four wheel drive back and forth on the pit a few times then applied a little outward pressure to the axle flange and it moved out of the differential a good half-inch, well past where it had been riding on the seal normally. There were no signs of a leak from the axle at all. At this point I recommended pulling the axle housing off the differential to inspect the parts inside.

Once I had it apart it became clear what was going on: the passenger inner axle with the flange that you can see in figure 2 goes into the differential where the splined end of the shaft connects to a collar that is splined in the center (figure 3). On the other side of the collar is a set of teeth which then mate up to a stub shaft (figure 4): 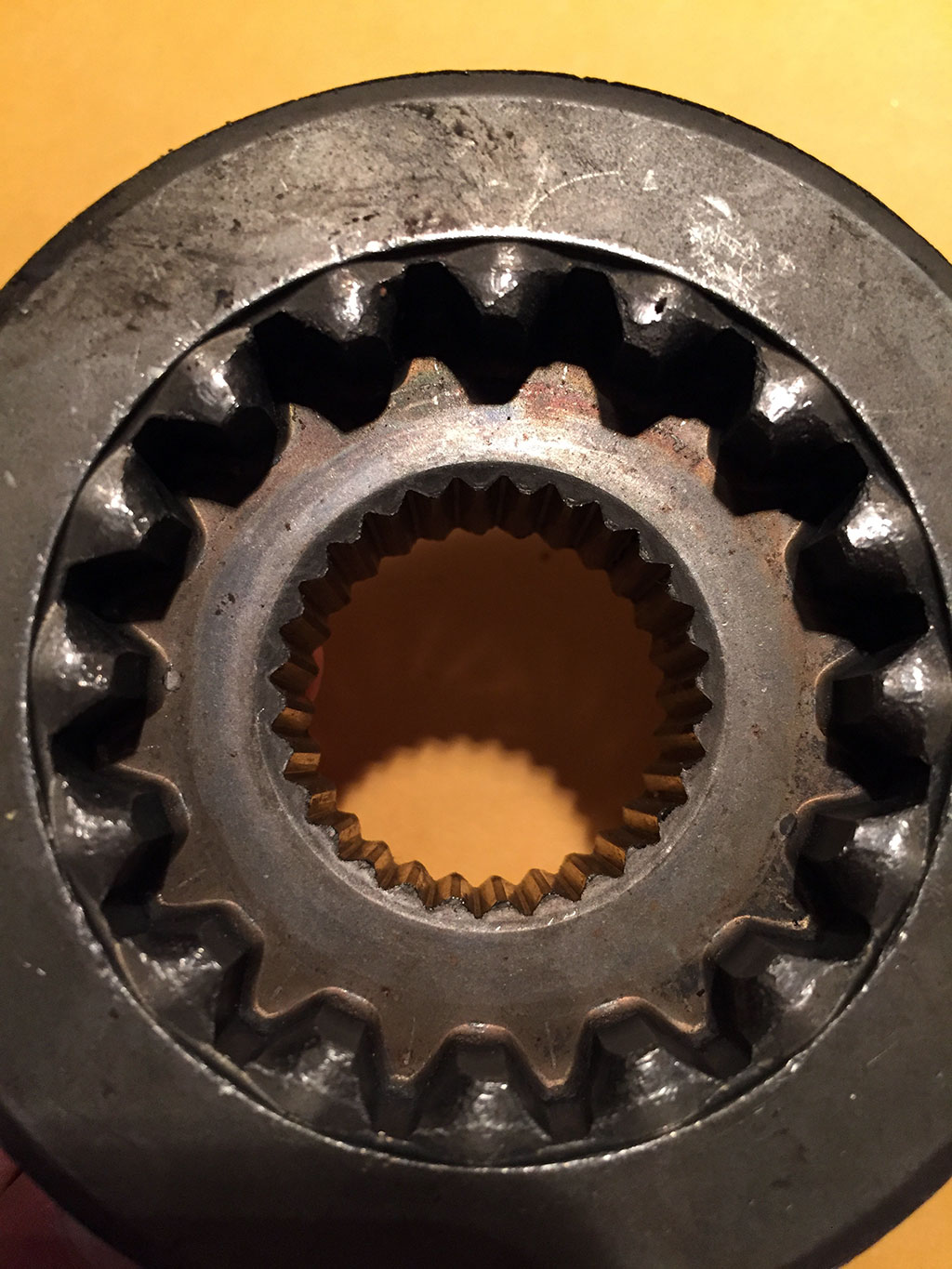 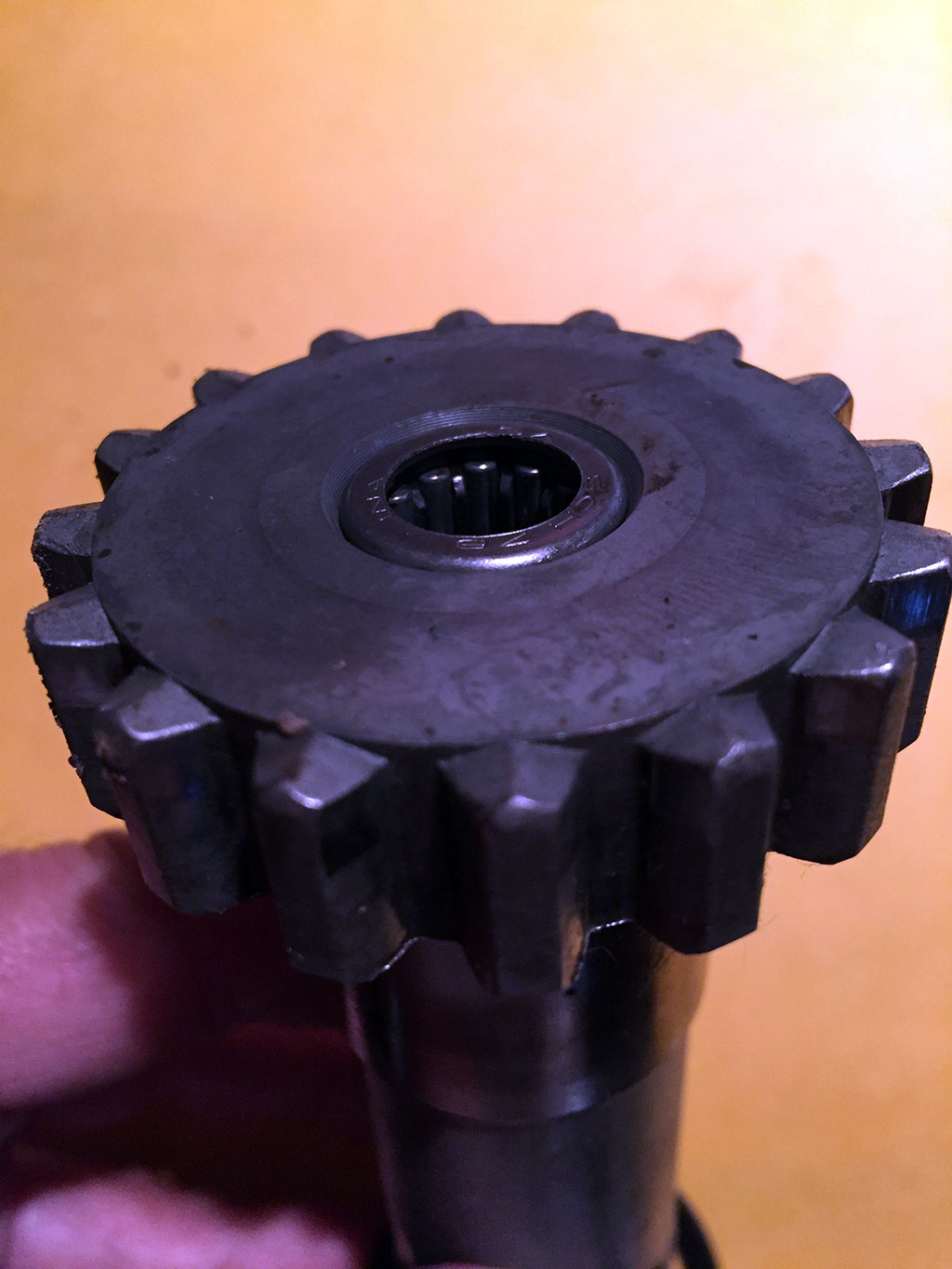 The collar also has a groove that the fork engages into. When the actuator motor pushes the fork over, it slides the collar over where the teeth on the outside of the collar engage the teeth on the stub shaft. This ties the two front axles together. When in two-wheel drive the collar is free to spin on the end of the axle shaft coming in from the passenger side.

The teeth on the collar that engage the stub shaft were really worn and had a taper on the leading edge of the teeth, and as you can see in figure 5, the mating surface is not very deep where the teeth mesh: 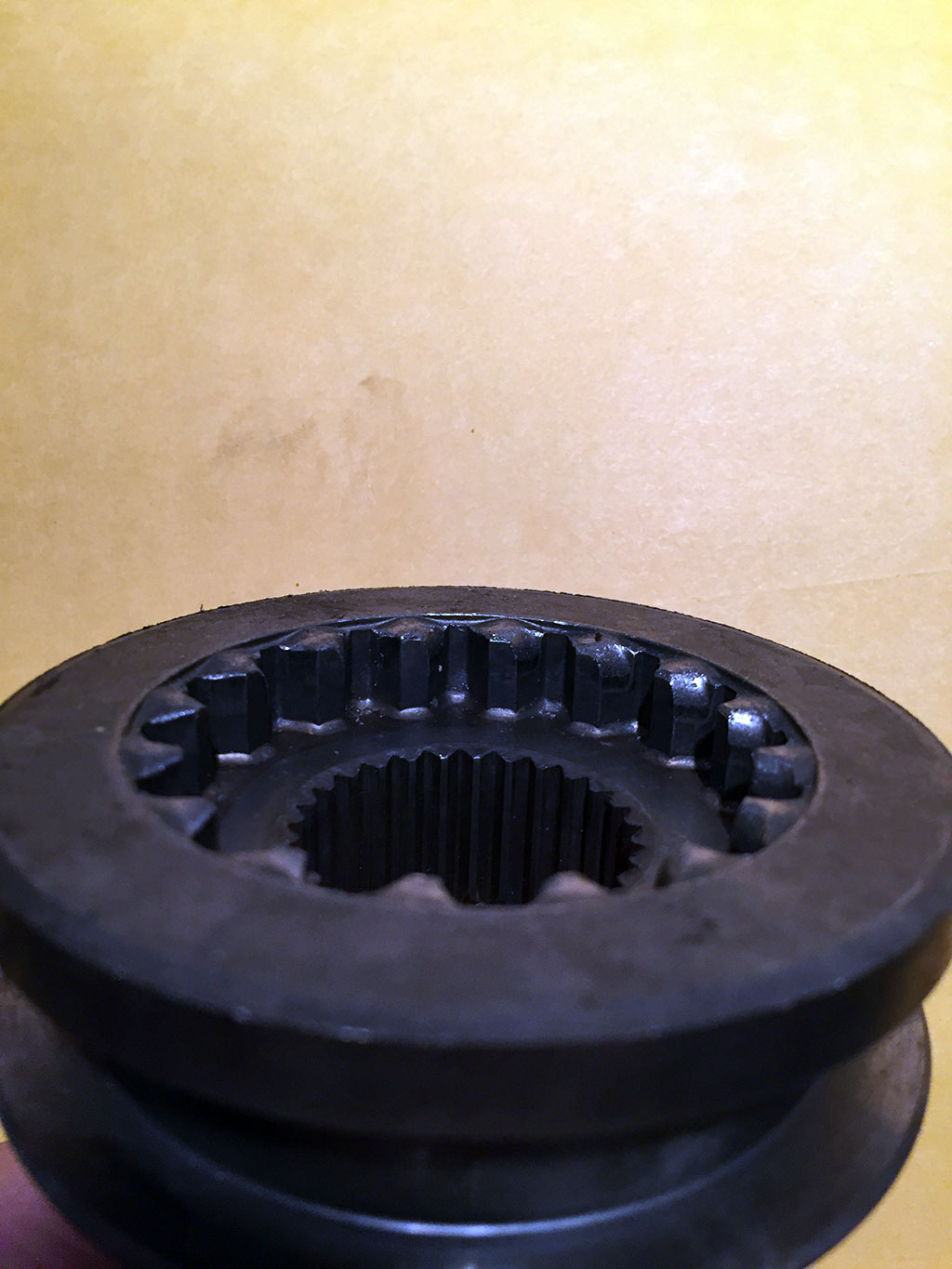 One interesting side note, the teeth on the stub shaft that mated to the teeth on the collar showed very little wear (figure 3). When there was a load applied to the teeth moving forward in four wheel drive, the worn teeth would allow the stub shaft to jump over the teeth in the collar causing the loud bang. The wear was just enough to make it happen with a lot of throttle input, but not under light throttle. The teeth were tapered on the one edge in the direction that it is normally turning, and explains why it would only bang in forward ranges and not in reverse. In reverse it would apply the load to the other side of the teeth that were not worn nearly as bad. Because of the shallow depth of the teeth, once it happened a couple times it got worse fairly quickly.

A couple side notes: this vehicle had been to another shop and had been diagnosed as a jumping chain in the transfer case. I also found out after all was said and done that this customer lived in the country and would leave the truck in auto four wheel drive leaving the front end engaged, and potentially contributing to the wear that was found. Once all the affected parts were replaced, the vehicle performed flawlessly with no noise under load. This was certainly a good learning experience; I can honestly say that I would have bet money that this was a transfer case issue from the beginning. I hope that this information may just help someone with a noise issue on one of these trucks get to the bottom of it quickly.