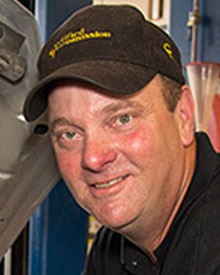 Chris Foster is a diagnostician for Certified Transmission and has been in the transmission business for over 30 years. He is an ASE Certified technician, and has also been in the Army Reserves for 31 years.

We have all had our "feel good" moments about maximizing our customer relationships by going above and beyond when we diagnose a customer vehicle with the goal of saving them money during their visit to our shop. Minimizing their expense, getting them back on the road in a timely manner, and providing a pleasant service experience influences them to sing our praises to friends, and thus increase our sales revenues from "word-of-mouth" advertising. Sometimes cost-cutting measures can end up costing more in the end.

One recent example of this started with a phone call from one of the nicest potential customers ever:

"Could you tell me if you can work on a SAAB?"

"Well, certainly we can, when would be a good time for you to bring it by for us to take a look at it?"

The 2005 9-2X was brought to our shop for a whining noise on deceleration, and a growling noise at all times while driving. I first checked the car out assuming that it was going to end up being a hub bearing or some type of differential issue.

During the customer drop-off, I overheard a few comments that the daughter of the owner was in the process of moving to the Midwest from the east coast, and the car started making the noise when she got close to her destination. She had purchased another car and parked this one, so the parents (owners) decided to fix it up and sell it. Prior to her journey, she had new tires installed, got all of the due maintenance work completed, and the vehicle only had 90,000 miles on it.

As I inspected the vehicle, I noted that the new tires on the rear of the car did not match the used front tires. During the road test, there was a horrible growling noise coming from right side, in-between the seats, and also a slight howling noise on deceleration from the rear of the vehicle. At this point it was evident that this was a pretty severe noise, and I felt that the cause was deep within the drivetrain somewhere. This car had a manual transmission and the noise got progressively louder with vehicle speed, but did not change with gear selection.

As I raised the car up in the air, I could smell gear oil. There was gear oil all over the underside of the car. Since this vehicle was an all-wheel drive model, I took a closer look at the tire sizes knowing that mismatched tire circumferences can cause issues on 4WD and AWD applications. The tires were all the same size of P205/55R16, but the fronts were a little worn @ 1/16" above the wear bar, while the rears were new with 2000 miles on them at the most. These measurements were within the guidelines of acceptable tire size variation, but it's generally a better practice to replace all four tires at the same time on any AWD/4WD application.

On the surface, it would appear that the tires weren't the likely cause of the issue. They were the same numerical size all-around, and the fronts were not badly worn. Besides the information gleaned during the road test, I could only see that part of the aluminum housing on the transfer case was physically melted, and the seal was damaged due to heat. This isn't something I would normally expect to see, so some deeper research would be required.

Something that I hadn't mentioned previously: the new tires on the rear were not of the same brand as the used fronts. Brand "X" on the fronts were a well-known, high-quality OEM brand, whereas the newer rears were Brand "Z" ? a lesser quality house brand.

A little Internet searching revealed some manufacturer specifications for each brand of tire. This data lent support to my concern over the tires and their contribution to the driveline issued the car was having. Here's what I found:

In the simplest terms, the tires had a different circumference right out of the factory based on the brand-specific specs. While the wear on the existing front tires actually would have actually helped reduce the risk of driveline bind-up with this mismatched tire configuration, it still wasn't enough to overcome the differences enough to prevent driveline damage.

After the customer had traveled over 1400 miles with this configuration, the damage was done. There was enough constant bind-up that created so much heat within the transfer case to the point that the aluminum case and seals were permanently damaged, ruining the transmission. The lube leaked out of the case, and internal failure occurred within the bearings and gear train. Subsequently, the rear differential was also damaged from the same abuse the transfer case sustained.

We were able to install a used differential and transmission into this SAAB, in order to get the vehicle owner back on the road in a cost-effective manner. In the end, the cost of repairs could have been avoided had all of the tires been replaced at the same time. Most vehicle owners, and sadly, a good many shops, wouldn't suspect that tires could wreak so much havoc on the driveline. I recommend checking, and actually measuring tire circumference any time an AWD or 4WD driveline concern enters your shop. That's the right way to saving your customers money.