Multiple Resources and Attention to Clues Get it Done

Today's adventure starts with a customer coming into the shop with a 2015 Ram Pro Master "City" Van. If you have not yet seen one, this is the smaller version of Pro Master full-sized van, and this model has a 2.4L 4-cylinder engine with a 948TE 9-speed transmission. The customer came to our shop because the battery went dead, and after the new battery was installed, a bunch of warning lights came on. The odometer was flashing, and the transmission was clunking into gear, and his buddy that helped him change the battery had a generic OBD2 code reader that was able to pull a couple of transmission codes. They had no idea what they meant, but they were pulled from the TCM and useful to us.

The vehicle was check-in upon arrival, and I was the lucky recipient of the job. When I first read the concern, my initial thought was that there was no way that changing a battery could cause this issue. Then my second thought was, hmmm, dead battery and could they have hooked up the jumper cables backward, or possibly reversed the cables when the new battery was installed?

I went to bring the van into the shop so I could begin the evaluation. I started the engine and put the transmission into reverse, backed up, tried to shift into drive, but the shifter was locked into reverse; it would not budge. I shut it off and got the shifter moved into park. I started it up again, put it in drive, and pulled it into the shop. Once again, the shifter was locked, but in the "Drive" position this time, and would not move. The customer had never mentioned this as an area of concern.

I then hooked up the Snap-On Zeus scan tool and ran a Vehicle System Report which scans all of the modules equipped on the vehicle and found these codes in the TCM: P2784 (Input Speed Sensor 1/2 Correlation), P0610 ECU (Vehicle Options Mismatch), P1720 (Output Speed Sensor/Wheel Speed Rationality), and P1500 (ECU Configuration Mismatch). The ABS, BCM, and ESM controllers were all showing configuration and low voltage codes. (Figure 1) 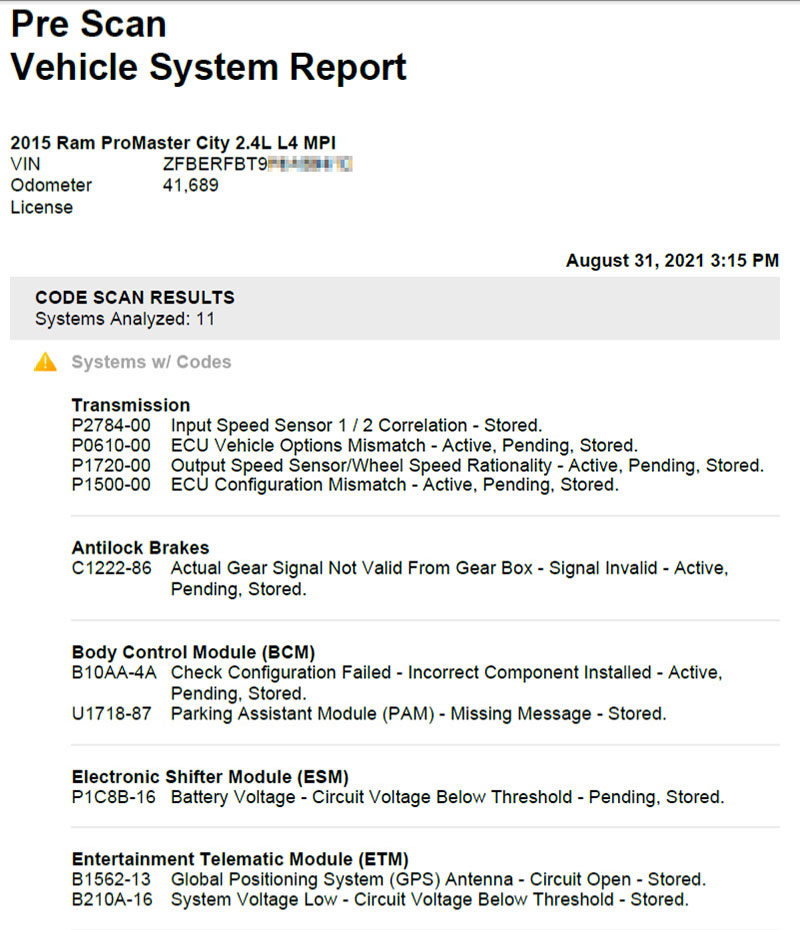 At this point, it was time to talk to the customer again and get authorization to get further into this issue. The only thing I was sure of at this stage was that I wanted to update the calibrations in the ECM and TCM, and research into why I could see no VIN # in the TCM, and try to figure out if this was the entirety of the issues.

The owner of the van authorized the additional time, and after a little research I came across something called "Proxi Alignment". The function of the Proxi Alignment procedure is to copy the current vehicle configuration from the BCM to all the other modules installed on the car. Could this be the whole issue? I did find a video from Snap-On for doing the Proxy Alignment, but they did not perform the procedure in the video because everything already showed "configured". The Snap-On scanner had the Proxi configuration alignment tool located in the body control module miscellaneous functions. There was also the "Check vehicle identification number", and the VIN number was correct for this vehicle as shown in the BCM.

I chose to try the Snap-On scanner first to see if that was a quick easy fix as it showed that the TCM needed to be configured. (Figure 3)

I followed the steps exactly as listed and it showed the process was completed. (Figure 4)

Well, long story short, I still had the P0610 and P1500 codes that would not clear out. I then decided to update the calibrations in the PCM and TCM while I was still contemplating on what to check next, as I'd hoped the Proxy alignment would have fixed it. All of our locations have the WiTech 2.0 using the J2534 box as the interface, so I purchased a short-term Tech Authority subscription for programming and went ahead with reflashing those modules.

I attempted to do the TCM first, and the dialog stated to make sure PCM was updated prior to flashing the TCM, and stated that if it was a NEW TCM, then Proxi Alignment configuration was required! Well, it was not new, and I had already done that with the Snap-On scanner! I updated the PCM calibration and then the TCM also, and all went well. The calibrations were updated, but the codes persisted.

While using the WiTech, the Proxi Alignment is listed in the Guided Diagnostics, so I figured I would look at it with the OE scan tool. I was still hung up on this, thinking that it really makes sense that the TCM's missing data could be the direct cause of all this. So, I repeated the PA process using the OE scanner this time, and I get to this screen: (Figure 5) 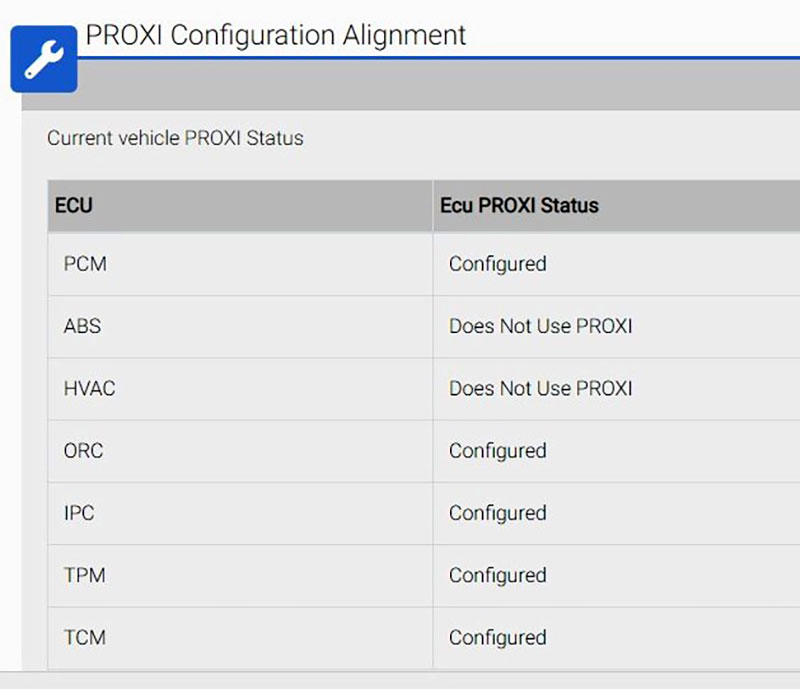 This showed that the TCM was already configured. A dead end. Still, being stubborn I decided to keep going and get to this screen: (Figure 6) 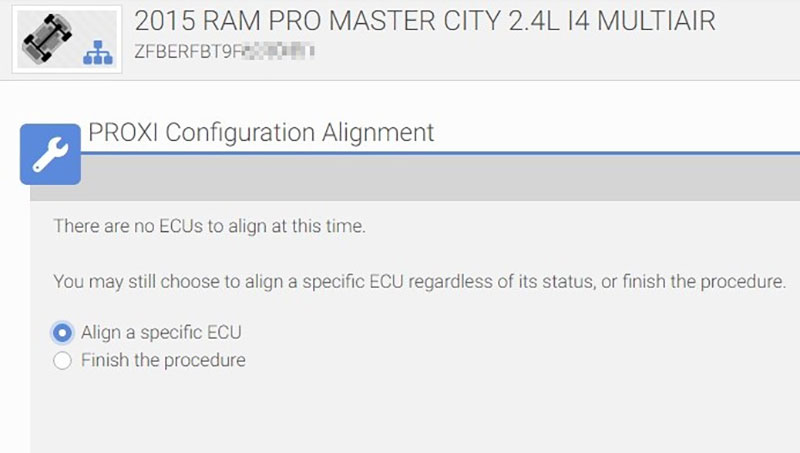 Now I saw, "You may still choose to align a specific ECU regardless of its status." This was encouraging. I selected the TCM and started the procedure, and now the thing that stuck out to me was that the WiTech prompted me to turn on the radio. What?! The Snap-On tool never prompted me to turn on the radio, and in the last ten years I have programmed over two thousand vehicles, and never once have I been prompted to turn the radio is on. You can see the radio is grayed out (present but not responding) because it was not turned on. (Figure 7) 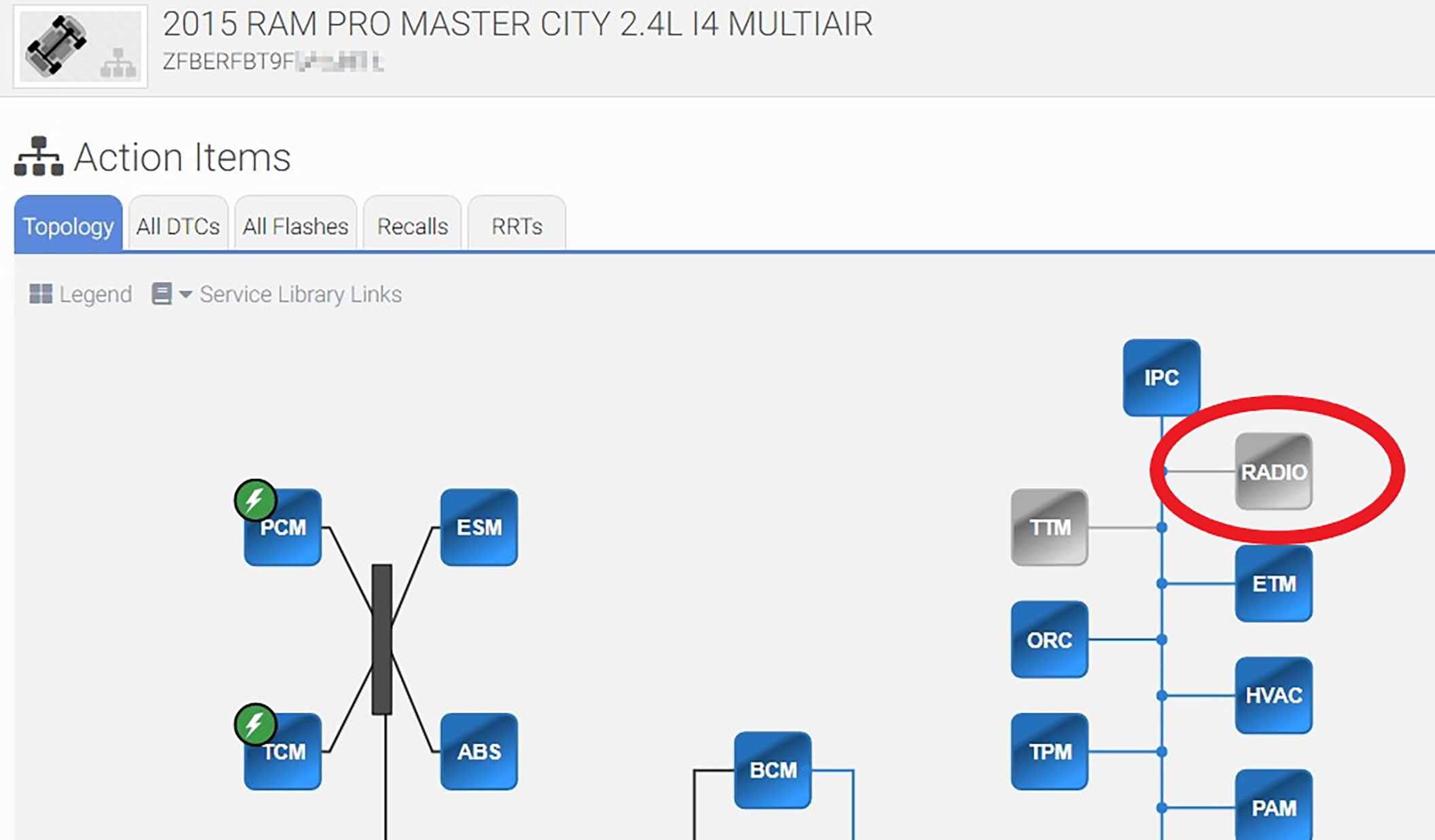 The procedure was completed and successful, and now the odometer stopped flashing, the shifter no longer locked, and the two configuration codes were gone!

A couple of nagging questions that I cannot 100% answer: would the Snap-On procedure be successful if the radio was on? And why the speed sensor correlation codes? On that one, I am going to assume that the TCM did not contain the tire size data. Perhaps stored in the BCM, or it could be a gear ratio that was not known. This transmission has a hydraulic park lock solenoid and a magnetic park lock solenoid so I must assume that when the vehicle came to a stop, the logic locked it into park and would not release until the key was cycled.

In this case, we've shown that some observation and the requirement of utilizing two different scan tools were required in order to complete the corrective procedures on this vehicle. Sometimes the shop manuals don't detail every needed step; the OEM scan tool had the guiding prompt where the Snap-On scan tool did not. It's a very complicated field we work in.