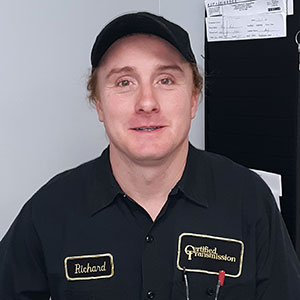 Richard is a Certified Transmission Diagnostician with 8 years in the automotive industry, and is an ASE Master Tech with L1 certification.

A modified 2010 Ford Mustang made its way into our shop, and it was sitting 4" from the ground with a complete aftermarket exhaust system and wheels. When I was given the customer write up sheet it read, "It will not exceed 35 MPH, the same in reverse, and it jerks hard." 35 MPH in reverse...really? Maybe that wasn't really what he meant, but that is how I read it. Upon further investigation into the history of the vehicle it revealed that another shop ran into the same issues and said it was fixed. Wonderful; I had apparently inherited someone else's come-back. That never happens, right? The customer also stated that the problem had been intermittent for one or two months and had had a solenoid pack installed a couple of months ago.

When I first started the engine, the car jerked and moved forward 5' and then neutralized. I noted a hydraulic pump whine also, and when I brought it into the shop I first checked the fluid and found no fluid coming out of the standpipe on this 5R55S transmission. This Mustang had 96,000 miles on it, so I thought surely this wasn't a serious electrical issue. When I scanned for codes I found three electrical codes: P0778 (PC solenoid B), P0798 (PC solenoid C), and P0966 (pressure control solenoid B control circuit low). There were also mechanical fault codes for all the shift solenoids A, B, C, and D: P1714, P1715, P1716, and P1717.

I then added three quarts of transmission fluid, and when it started coming out of the overflow I smelled burnt fluid. I then printed the code list and cleared codes. The pump whine was still present and the vehicle neutralized after five minutes of putting around the parking lot. It seemed that this one would be pretty simple; obviously low hydraulic pressure is causing the codes. The fluid was really burnt so there was no chance of fixing this one in the vehicle, so I recommended that the unit be replaced.

After we sold the job, the R&R tech installed our remanufactured unit a few days later, and pulled it around to the front of the shop for me to finalize the job. I pulled the car into the shop and checked to make sure the calibration for the PCM was current, and it was. So now it was time for the final road test. While backing out of the shop the transmission neutralized again, so I shut the car off then turned it back on and I was able to go forward and reverse. Against my better judgment, I decided to drive it on my designated route and had no issues. Arriving back to the shop, I told my coworkers that there was more going on with this vehicle and I needed to continue to diagnose it. I explained what had happened and wanted to let it sit overnight before trying it again.

The next day I drove the vehicle a little harder and the transmission was slipping in 2nd and 5th gear under heavy throttle. No diagnostic trouble codes were present so I needed to attempt to replicate the issue before I could go any further. I backed the car out for the second time and it neutralized again. The work day was over so I figured I'd start fresh in the morning.

I went to bed that night and had a dream about a headless horseman in a Mustang; how weird was that? Getting back into it that morning, I decided to take a different approach and re-evaluate everything. I really needed to go over the 'On Board Diagnostic Parameters ID's' (PIDs) with fine a tooth comb like I should have done the very first time this vehicle neutralized in the shop.

I set up the scanner with a data list and went for another road test. The MIL illuminated and DTC P0798 (EPC solenoid), P0970 (EPC solenoid circuit low), and then the P1714, P1715, P1716 and P1717 codes that the car originally had pulled up. As I was watching the data stream, some strange PIDs occurred at 2100 RPM sitting still (Figure 1). The vehicle neutralized for a split second before jerking forward. At this point I needed to look over the electrical codes once again and see what solenoids are on when the vehicle is in drive. Moving forward, I knew that both SSA and SSD should be on for 1st gear. I noticed in 1st gear that SSA was on, and SSD was off. Only until I reached about 2100 RPM, the vehicle jerked forward, spun the tires, and then everything functioned properly electrically. Both SSD along with SSA were on at this time. On the solenoid apply chart (Figure 2), 1st gear SSA on SSD are on, and all other gears have a minimum of two solenoids on. Only having 1 of 2 shift solenoids required to be on places the transmission in an unknown state. I watched the pressure control solenoids when I had no movement in first gear; when watching pressure control 'B' solenoid it was high when it should have been variable. Once I started looking at the pressure control solenoids, I realized pressure control solenoid 'A' didn't always do what it was supposed to do in each desired gear. If you have a PCS (pressure control solenoid) always open, the system is dumping hydraulic pressure and not sending it where it is supposed to go. This would cause lower line pressure at times and will allow clutches to slip under heavy load. The pressure control solenoids are a Variable Force Solenoid (VFS) type. The VFS is an electro-hydraulic actuator combining a solenoid and a regulating valve. 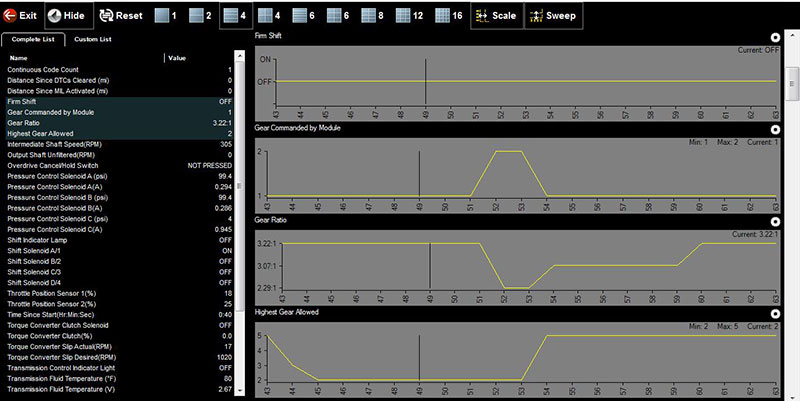 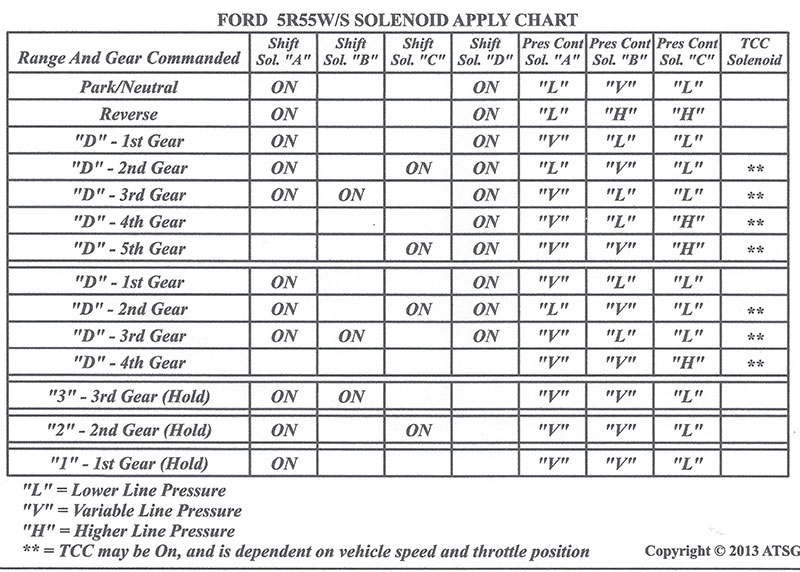 I set up the component test with the Snap-On Zeus so I could control the solenoids while watching the result with the scope. I noticed that some of the pressure control solenoids never came off ground when they were supposed to, or also would not pull all the way to ground while they were regulating. At this point I knew we had a controller problem. Now I had to prove it with the scope while the vehicle was commanding it.

With the scope connected, this is what I saw: (Figure 3). With the PCM commanding control not going through the component test menu, Ch. 2 (green) is connected to PCA which is being controlled, but SSA (Ch. 1) and SSD (Ch. 4) are sitting at ground. I then realized that when some of them were shorted to ground, the only way I could reset the circuit or gain functionality again was to unplug the PCM and plug it back in. At this point, with the scope hooked up and using the component tests, I could toggle the circuit with the scan tool a few times before randomly a few pressure control solenoid circuits would stick to ground or only reach five volts of B+ voltage available. I didn't know what else I could do to prove to myself that this was a PCM problem, and as turned out, proving the Mustang needs a computer wouldn't be my only challenge. 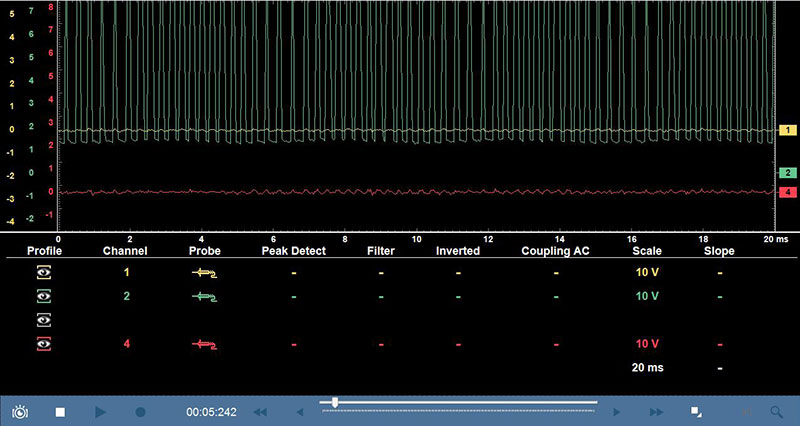 Two weeks and a couple grand later, the new PCM arrived. I followed the instructions on the removal and replacement of the PCM to a 'T'. As most of you know, if you want to remove and replace the PCM with the IDS or FJDS you need to use the PMI function (programmable module installation). During this process I received a, "testman user error" and ended up locking the computer. I then made a call to the aftermarket manufacturer of this PCM and told them what happened. They advised that their computer was already programmed and just needed the PATS relearn done, and I was advised that I didn't follow "their" instructions and had followed the OE procedure instead. I informed them that the PCM did not have any type of instructions with it, so they agreed to send another PCM out to me.

In the end, the new PCM solved all of the transmission-related issues. I received the replacement PCM and completed the PATS relearn. If you do any type programming on a regular basis, you know that Ford has had some issues with a "Testman" error from the late 114.xx version, and at the time of this writing, they are at 115.3 and I believe that those issues have been fixed.