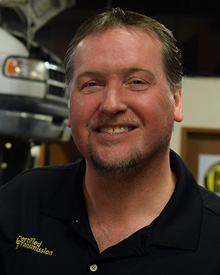 About a month ago a customer came into our shop with a 2008 Chrysler Town & Country equipped with a 4.0 liter V6 engine, and a 62TE transmission. He was complaining that it had a whining noise, and sometimes it would not shift and seemed to stay in the same gear. When the vehicle was hooked to the scan tool it had a code for the overdrive solenoid control circuit (P0760). The fluid was at the correct level and smelled like normal fluid, however, it was dark purple indicating possible metal contamination.

I took it on a test drive and verified that the whine noise was definitely coming from the transmission, but it shifted and operated ok. There were no other DTC's in any other modules except for the TCM and the visual inspection did not reveal anything that needed attention. We also do a battery and charging system test with a Midtronics analyzer which also passed all the test protocols. The next step was to get the customer's permission to remove the transmission pan for inspection, which the customer granted so we then proceeded with the inspection. Upon pan removal, severe fine metal contamination was verified on the bottom of the pan, along with large amounts of metal in the filter when it was cut open. I think we found the cause of the noise!

The customer decided that with 160,000 miles it was best to replace the entire transmission with one of our remanufactured units. We replaced his transmission, reprogrammed the powertrain control module, and used a "hot flush" machine to clean out all of the metal out of the transmission cooler and lines. I cleared the code and test drove the Town & Country for about 30 minutes with both highway and city driving. The whine was gone; it shifted perfectly and did not set any codes, so I felt that it was safe to presume the code was caused by a faulty overdrive solenoid.

We always inform our customers to return to the shop in 15 days to perform a free follow-up evaluation so we can make sure that there are no leaks, codes, or any other problems associated with our repair work. The customer returned about two weeks later stating that the transmission was nice and quiet now, but that it still got stuck in second gear one time since we replaced his transmission. I scanned the Town & Country to find that the same P0760 overdrive solenoid code was stored. So we then had to ask the customer to drop off his vehicle again so we can figure out what was causing the code to reset, we put him in a rental car so we could continue diagnosis. At this point I figured it was safe to assume the solenoid itself was not the problem since it was replaced with the transmission, therefore it could only be a bad overdrive solenoid control wire or an intermittent internal failure of the powertrain control module.

Since I have been burned before by using resistance checks, we try to only use voltage drop testing unless the component is completely inoperative. I back-probed terminal #19 at the transmission solenoid connector in preparation for a voltage drop test. I had battery voltage until I activated the overdrive solenoid with the scanner, and 4 volts were indicated on my volt meter, indicating that the solenoid was only getting about 8 volts of the 12 volts needed to properly operate the solenoid, however it was apparently enough to get the job done most of the time. Was the voltage drop on the B+ side, or the control side of the circuit? I probed on pin 21 for the 2-4 solenoid, and when activated the DVOM showed about .10 volts indicating a good circuit which confirmed the integrity of the B+ side of the circuit.

A closer inspection of the wire revealed that only three or four strands of copper at the terminal of the transmission connector were making contact (FIG 2). A small tug on the wire was all it took to completely break it. This is a perfect example as to why a simple ohm check of the wire is not a good enough test in this case; an ohmmeter test would show normal resistance indicating no problems with the wire, even with only three strands of copper holding it together. The real issue was that the damaged wire could not support the amperage needed to properly activate the solenoid at times, especially when hot. 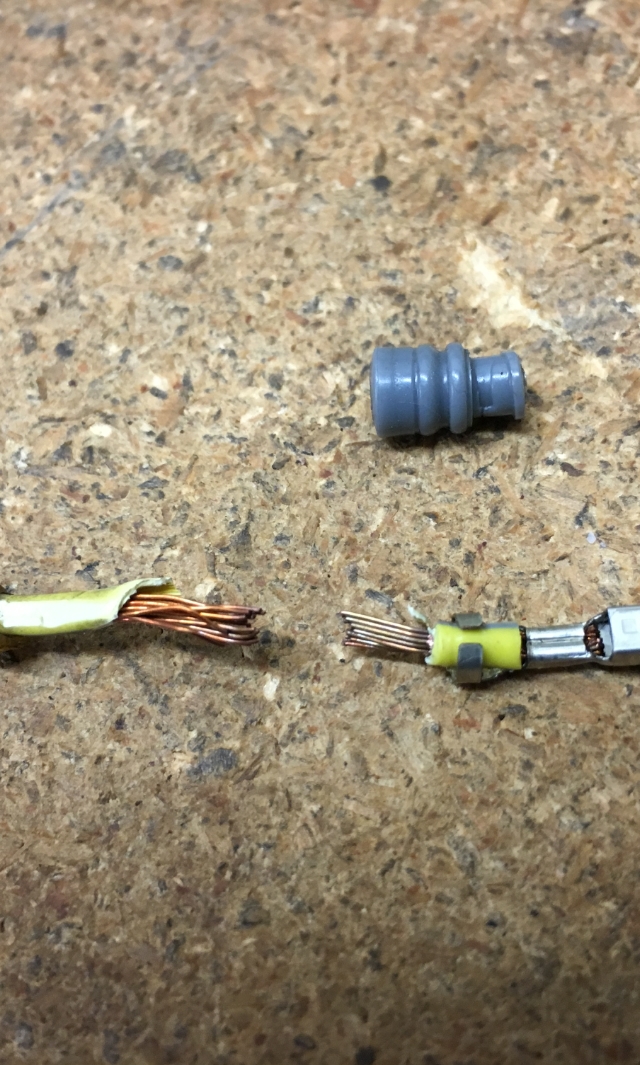 I did get a little lucky during diagnosis. I wanted to look at the connector just to make sure that the R&R technician had the connector fully locked into position, which it was. However, after checking the connector the problem went from being extremely intermittent to setting the code pretty easily, so that did narrow down my focus on where to look for the problem. Happy accidents can be helpful in cases like this.

I found a transmission solenoid connector pigtail that we use for testing and robbed one of the terminals/wires out of it, and installed it into the Town & Country's solenoid connector. A quick voltage drop test showed that the solenoid was now getting use of all 12 volts being supplied to it. I cleared the code and test drove the van another 30 minutes and no codes were reset. We sent the customer on his way and he has not been back, now having both of his initial complaints resolved. The whine noise was easy to figure out, but the intermittent code P0760 in this case took a little extra effort to diagnose.

Now wouldn't you know it, within one week of repairing the P0760 in the 2008 Town & Country, a 2010 Chrysler Town & Country, also equipped with a 4.0 liter V6 and a 62TE transmission, came to our shop with a complaint of a check engine light, intermittently not shifting, and staying in second gear. This vehicle's transmission fluid level was full and in good condition, however. I scanned it to find a 2-4 or 2C solenoid control circuit code P0755. I thought, "What are the chances that this van had the same problem as the 2008 Town & Country I repaired a week ago?"

I decided another voltage drop test was in order. I back-probed the solenoid connector at terminal #21 dark blue and yellow wire for the 2-4 solenoid control. I activated the solenoid with the scanner, and my voltmeter read 5 volts indicating that the solenoid was only getting 7 of the 12 volts needed to make it properly operate. I barely tugged on the wire, and it snapped right off (FIG 3); it was the same exact scenario as the wire on the ?08 Town & Country a week ago.

I replaced the terminal, cleared the code and test drove the van. It shifted fine and no codes were reset. Who says lightning can't strike twice?