The Case of the Output Speed Sensor Spike

Occasionally you will have a vehicle come into your shop that takes you down a different path than what you might have expected. The following account tells the story of one of the times that it happened to me. The star of this show is a 2006 Chevrolet Silverado 2500 4?4, equipped with a Duramax diesel engine and an Allison transmission.

Armed with an understanding of the customer's concerns, I started the diagnostic process like I always do by hooking up the scan tool and checking for any trouble codes. The code check revealed P0729 and P0733. P0729 shows up as a ratio error in 6th gear, and the P0733 is 3rd gear ratio error. A quick check of the fluid indicated that it was full, red, and had no burnt odor. I took the truck out for a road test with the codes in memory, and much to my dismay, the truck functioned properly and nothing on the data stream appeared out of the ordinary, including the output speed sensor signal.

Next I decided to clear the codes and drive it with a graph on the input speed, output speed and current gear. The truck shifted through all the ranges properly, and the speed sensor graph looked clean and smooth and no codes were set: 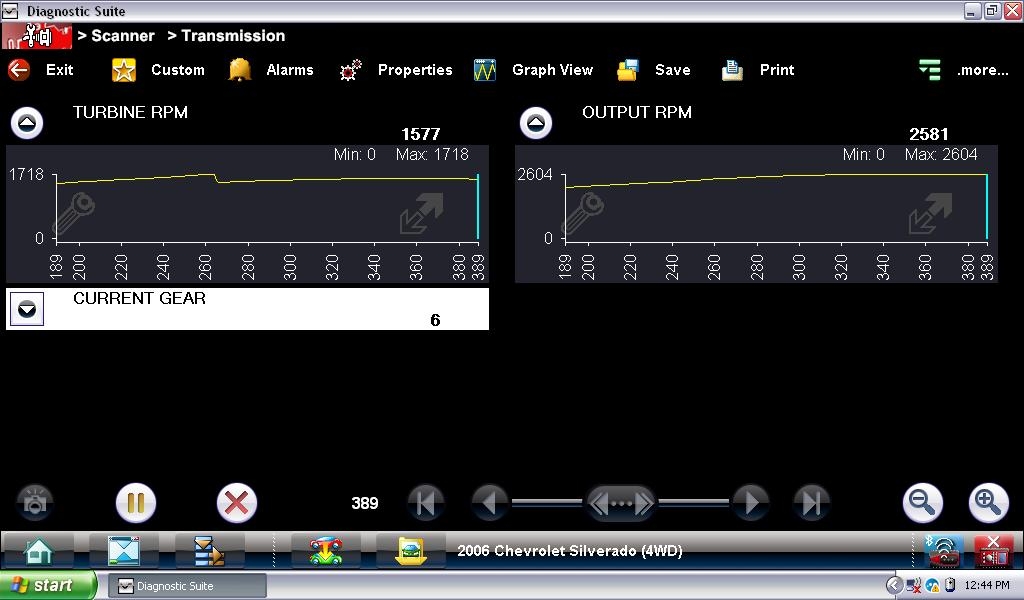 Somewhat frustrated, I pulled into a parking lot and looked through some of the other PIDs hoping to see something unusual. Upon pulling into the parking lot, I did not put the truck in park, instead simply idling in drive. The next step was the first in finding the problem. Like most techs, I am always trying to listen and feel what is going on with a vehicle. As I sat there I thought I'd heard a slight exhaust leak, and I would want to note it on the paper work if there was one. I decided to power brake the truck a bit to see if I could hear where the leak might be coming from, and that's when I saw it: a momentary spike on the output speed sensor graph, and even better yet, I was able to make it happen fairly regularly. During this screenshot the truck remained completely stationary: 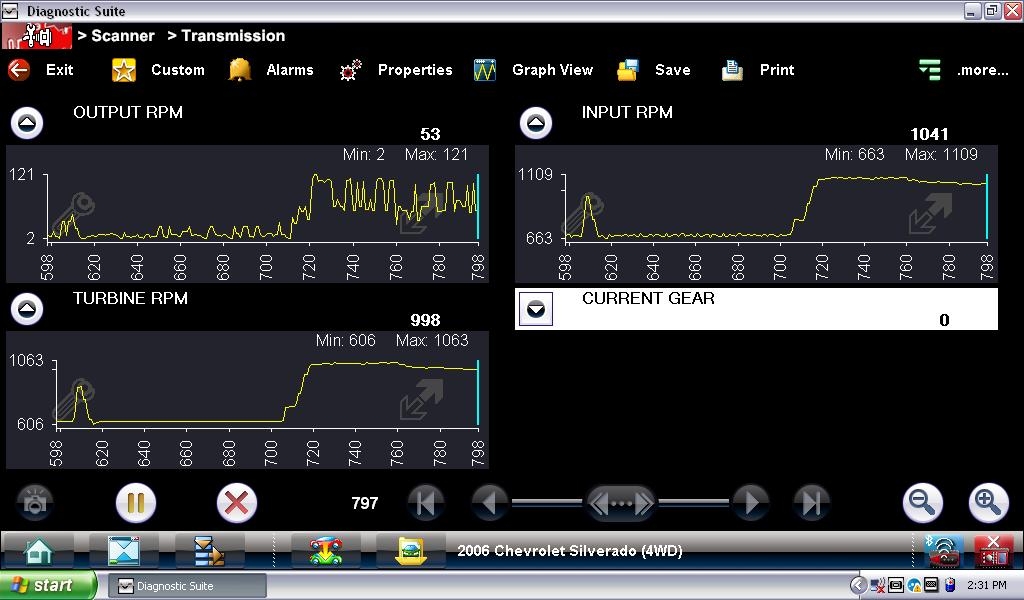 Looking at the wiring on the truck itself, I couldn't see any routing issues and testing did not show any signal transfer from the input sensor. While I was looking things over, I checked chassis grounds and even removed the serpentine belt to make sure there was not any static charge that may have been causing voltage problems. Removing the belt did not have any effect on my concern. I thought about some of the Chrysler vehicles I had seen with excessive alternator ripple causing phantom voltage in the output speed sensor signal. Though I had never seen this on this type of vehicle, I decided to run an alternator charging output and ripple test, and everything passed with flying colors.

This truck had a lot of miles on it and as far as we could tell it had never had a transfer case replacement. There was enough wear inside to allow the output shaft to move around when the torque of the diesel was applied causing a false output signal to be generated.

At the beginning of the testing, the symptoms and data appeared to point to something electrical causing the problems, but in the end it was a purely mechanical issue; one that was not related to the transmission at all. We installed a remanufactured transfer case, did multiple road tests, and confirmed that the symptom had been corrected. The customer was happy that his "transmission" problem had been corrected.

As demonstrated here, the symptoms don't always lead you down the right path. In many cases you will need to leave the familiar path and go down the road less traveled. If not for the spike being witnessed during the testing, this issue may have been impossible to find. Always watch for clues and don't ignore the unusual. Sometimes we have to be more of a detective, rather than a tech.