Do Not Stop Diagnosing After Solving the First Issue 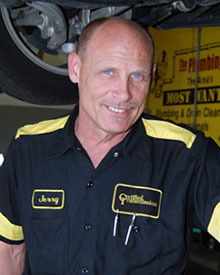 Jerry Huerter is an ASE certified Master Technician and has over 35 years of experience in the automotive industry. He is currently working at Certified Transmission’s Overland Park KS facility diagnosing vehicle problems. His years of experience make him a great asset to the company and its customers.

Our story begins with a 1995 Chevrolet K1500, 6.5 Diesel with a 4L80E transmission that was brought into our shop by one of our wholesale customers. The customer had replaced the transmission in this vehicle with one of our remanufactured units. After doing so, the customer stated that the check engine light came on and was setting multiple transmission codes, and that when going around a left-hand turn the transmission would neutralize.

I began my diagnosis by checking the fluid level and scanning for codes. The fluid level checked okay. Upon scanning system I found four transmission codes: 72, output speed sensor; 83, torque converter quad driver module; 82, shift solenoid'A' circuit, and 81, shift solenoid'B' circuit. I then cleared all codes to prepare to take the vehicle for a test drive.

After clearing the codes and the engine turned off, the solenoid codes would immediately reset. Upon starting the engine, the communication between the scan tool and the PCM would be lost. Even though there were codes set and no communication with PCM, I decided to go for a test drive.

I was expecting second gear starts and no shifts, but to my surprise the transmission shifted properly through all of the gears. Also, I did not experience the neutralizing around the left-hand turn that the customer had complained about. After returning to the shop, I again checked for codes (without the engine running) and found that the solenoid codes 82 and 83 where still present, and that code 83, torque converter quad driver module, had returned. Based on this information, I suspected PCM failure. After replacing the PCM the check engine light went out, and the transmission solenoid codes did not reset. Problem #1 solved!

The PCM failure may have been related to the shorted wiring. This case was unique, because there were multiple issues that created a common concern. It also demonstrates the importance of a complete, thorough diagnosis. In this age of the automobile, electronics play a dominant role in the control and well-being of our powertrain components, and one issue begets another. In the end, this was a successful repair and the customer left the shop happy.