Explorer In A Bind

We recently had a 2002 Ford Explorer come into our shop with a shifting complaint. The customer had noticed that it slipped or felt bumpy when under a fairly hard acceleration.

Our initial inspection consists of a road test to verify customer concern, computer scan for trouble codes and a visual inspection. On the road test, I felt what the customer was describing; it actually felt kind of like an abrupt engine misfire, something like you would feel with a manual transmission car or a misfire when TCC was applied.

It only seemed to happen at moderate to heavy acceleration between 15 to 40 mph and was a very quick binding sensation when it happened. Upon returning to the shop, the first thing I noticed was the two new tires on the rear of the vehicle. They were a different brand than those on the front. I thought to myself, "Hey, I got this one." I grabbed my trusty tire stagger gauge measured all 4 tires; shockingly, they were all almost the same exact circumference, even closer than most matching tires that have some miles on them.

Next step was to check for trouble codes. Our scan tool retrieves codes from all modules in one step; as it turned out, the vehicle had no stored codes in the PCM, ABS or 4x4 module. At this point I set up the scan tool to look at the front and rear shaft sensors and the clutch duty cycle. I went for another drive, monitoring the clutch PWM. It was definitely the electromagnetic clutch that was causing the issue, because the PWM % was not steady. I was seeing it randomly drop out or coming on at the times you would feel the bind up. Compared to the readings on the speed sensors on the scan tool, they were a mirror image of each other. I thought this was odd with the way the t-case was acting, so I printed a wire diagram and hooked the scope up to the speed sensor signal wires. At this point I was convinced it was a speed sensor issue and the scan tool was just not fast enough to see the problem. I got the scope set up and went for another drive. As I watched the scope pattern while the problem was occurring I was amazed again, as there was a clean signal with no dropouts. "How could this be," I thought; Trouble was, I was still fixated on it being a speed sensor problem. 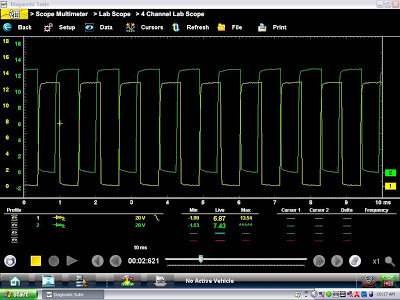 Back at the shop, I got on the computer to looked up service bulletins on Alldata. Lo and behold, I found the following:

ISSUE
some 2002-2003 Explorer 4X4 vehicles without AdvanceTrac (Interactive Vehicle Dynamics - IVD) equipped with an automatic transmission may exhibit a shudder in 2nd and 3rd gear on acceleration. This condition may be more pronounced when the vehicle is under load.

ACTION
Replace the 4X4 control module following the procedure in Workshop Manual Section 308-07A. Refer to the Part Application Table for the correct part number to install.

The bulletin fit the complaint as far as when the problem occurred but I didn't think it felt like a shudder. Not sure where to go with it next, I did a voltage drop test on the ground side of the system. The worst ground I could find was the 4x4 module ground in the passenger-side kick panel, so I went ahead and cleaned all the body grounds; Still no change in operation.

I decided to pull the trigger and purchased a new module. I got it installed and drove the vehicle the same as in the first road test. Even with several hard accelerations from a stop I couldn't duplicate the problem, so the customer concern was finally fixed!

However, as I was driving back to the shop I felt another issue, which felt more like a shuddering sensation. It showed up more with light acceleration, so I set up the graphs on the scan tool again and this is what I saw: 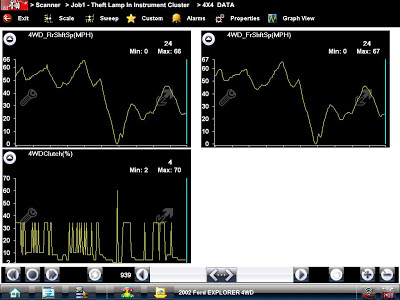 Did the new module cause this issue or did I just not feel it before? I plugged in the original module, and the first problem came back, but I could still feel this other issue.

At this point I had already checked the speed sensors and scan tool readings. The wiring diagram I was using showed a wire from the PCM to the 4x4 module which was not really marked. I figured it was the TPS input but when I hooked up a voltmeter to the wire at the 4x4 module it did not look like a typical TPS reading. I dug around a bit and found this in the Description and Operation: "The PCM converts the TPS signal to a pulse width modulated signal, and sends it to the 4x4 electronic module to control and adjust the transfer case clutch duty cycle." 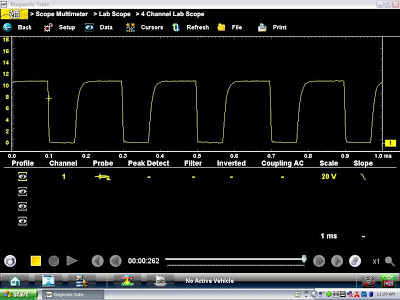 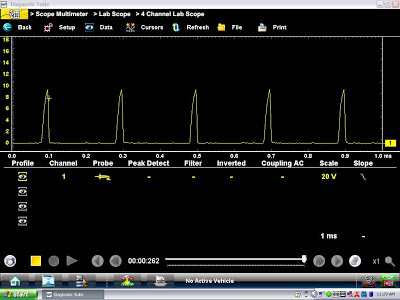 That made a little more sense, so I once again set up the scope to look at this signal.

The top image above shows the duty cycle at a steady throttle, and the bottom one shows a split second where the duty cycle dropped to what you would see at idle. This is what was causing the erratic 4x4 clutch PWM readings in Figure 2 and causing the shuddering sensation.

Installing a new TPS took care of this issue and it was finally smooth sailing for this problematic Ford Explorer.