Sometimes Lucky is Better than Good

I had a mid-90's Dodge Caravan come into the shop with the complaint of a rough noise/feel when driving above 45-50 miles per hour. The van had been into a couple of other local shops to try to find the noise with no success and the customer was getting frustrated.

As normal, I started with a road test to see if I could duplicate the Customer complaint. Sure enough, upon reaching 45 miles per hour the van started to make a low, growling sound and you could feel a little vibration thru the steering wheel. It was time to get the van inside and do a visual inspection.

I started by inspecting the transmission and engine mounts to see if they were cracked, broken or sagging. Though the mounts did not look like new, none were broken and I did not see anything that looked like it would cause the noise or the vibration that I was experiencing. I decided to take one of our R&R techs along for another road test to see if he could confirm what I was hearing and to help me pinpoint the noise.

Once again the noise started at about 45 miles per hour. The tech that I had riding with me indicated that the noise did not seem to be coming from the passenger side of the van. Like me, he could not narrow it down to a probable location. I did find that changing the load on the front end by swerving slightly back and forth had no affect on the noise. However, I did notice that once the noise started, the intensity of it did not change with increased speed but that when the speed was reduced below 45 mph it would gradually fade until you could not hear it at all. What next?

I brought the van back inside and put it up on the lift at let is run while listening underneath for any unusual noises. I ran the van up to 45 mph and no noise. This was getting interesting. I had a loud noise that needed road speed to make it occur, but more road speed did not make it worse and it would not make the noise with just the drive train moving. The vehicle itself had to be moving.

You may be a top rated technician, but now is where it is sometimes better to be lucky rather than good.

It was cool when the vehicle came in, so the air conditioning had not yet been turned on. It was starting to get warm while I was sitting there in the shop so I turned on the air conditioning. All of a sudden there was a loud bearing type noise that was coming from the cooling fan. The sound did not match what I was hearing on the road, but it did pique my curiosity. 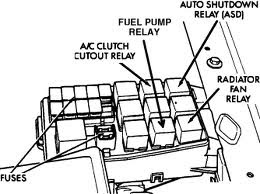 I wondered if this was the culprit, maybe it just sounded different out on the road. I pulled the fan relay to prevent it from engaging and started out on another road test.

Much to my disappointment it still made the noise. What the heck? I went back under the hood and turned the fan by hand, it was really rough feeling, and that is when it hit me. Maybe the fan running at full speed didn't make the same sound but what about when the fan was not engaged, but air entering the grill going down the highway would turn the fan at a much slower rate?

It was time for one more road test. I left the fan relay out, but this time I put a wire tie around the fan so it could not turn at all. Bingo, no noise! The air moving through the grill was turning the fan slowly and the bad bearing was the cause.

This explained why the car had to be going down the road to make the noise and why changing the load on the front end by swerving would not change it, as well as why it would taper down and quit all together when the road speed dropped.

It was a stroke of luck that I turned the air conditioner on. Otherwise I am not too sure I would have looked at the fan causing this problem.

So sometimes it truly is better to be lucky than good.