Listen to the Customer 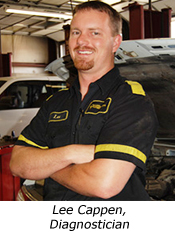 Lee's bio is currently being updated.

By listening to the customer, we can often learn not only want in needs, but sometimes we can pick-up valuable information that helps us solve their problem. In this case, listening to the Customer helped us find an unusual problem that could have been overlooked and led to an expensive and unnecessary repair.

The Customer came into our shop with a 2005 Ford Taurus. He complained that he was having an intermittent jerk at highways speeds. The Customer had gone through the trouble of documenting the times that this jerk appeared, the temperature that it occurred and under what driving conditions he was feeling the intermittent condition.

He also told me that another shop had recently rebuilt his transmission. I took the time to listen to him and ask several follow up questions that would help me to correctly identify the problem. It was very intermittent, and occurred only once every couple of days.

I started my troubleshooting by scanning and found a P0715 stored code. A P0715 is the code for a turbine speed sensor. THis gave me the logical starting point. I checked all the wiring and the connector, they looked good. Next, I cleared the code and went on my first drive. Everything checked out great and during the next two test drives the unit never set another code. I decided to wait until the next day and try it again. At last, after a 15 mile drive I felt a jerk, and the P0715 code returned. I returned to the shop and decided to pull the turbine sensor for a closer inspection. The sensor looked and tested good and ohmed well within specifications. I started to wonder if the other shop could have used the wrong reluctor wheel for this unit? I remembered reading a bulletin produced by our tech department that told us that several cases were found where an AX4S and an AX4N were built with the wrong reluctor wheel. This causes the gap between the wheel and sensor to be either too large or too small. This particular Taurus had a 4F50N installed in it as the AX4S was not available in a 2005 Ford Taurus. Could it be possible that the other shop used the wrong reluctor wheel? I measured the depth of the reluctor wheel and sure enough it was out of spec for a 4F50N. This would have been an easy fix on the older model Taurus with an AX4N or AX4S because they use the same sensor connector, but because the 4F50N uses a completely different connector, the only less costly option was for me to splice in a AX4S connector from an early model Taurus. It sure made the Customer a lot happier than having us to teardown the transmission and replace the reluctor wheel.

After completing the repair I took the car for several test drives with no issues. We released the car to the Customer and followed up with him in about a week, and he told us the jerk was gone and that he was very happy that we listened to him and worked together to solve his problem. That's why it's all about; a happy Customer and one that actually helped us help him. Always take the time to listen to your customer, you just might learn how to help solve the problem quicker and with less costs for everyone.