In this article, I am going to discuss bad connections. Starting at the battery and ending at, well...the battery. I honestly don't know why we are still talking about this, but it seems we see this every week: we get a vehicle in that has an issue at the battery terminals and it's not always causing an issue, but if it isn't right now, it will!

The Civic came into our shop from another shop that couldn't figure out the problem. This is common for our shops as we have built a reputation of being able to fix vehicle problems for a lot of places that do not have the ability or the resources to fix the complex issues. That statement is ironic in that the root cause is something basic in which the tech just skipped some of the most basic initial diagnostic steps and looked right over it.

In this case, this customer came in with printed wiring diagrams and an Alldata trouble tree diagnostic test. It had code P0966 (A-T clutch pressure control solenoid valve "B" open or short) in permanent memory. This was an immediate hard code that created a failsafe condition, so I did not even take it off the lot. While performing initial diagnostics, I opened the hood to see a nail in the negative battery cable post between the post and cable end! (Figure 1) 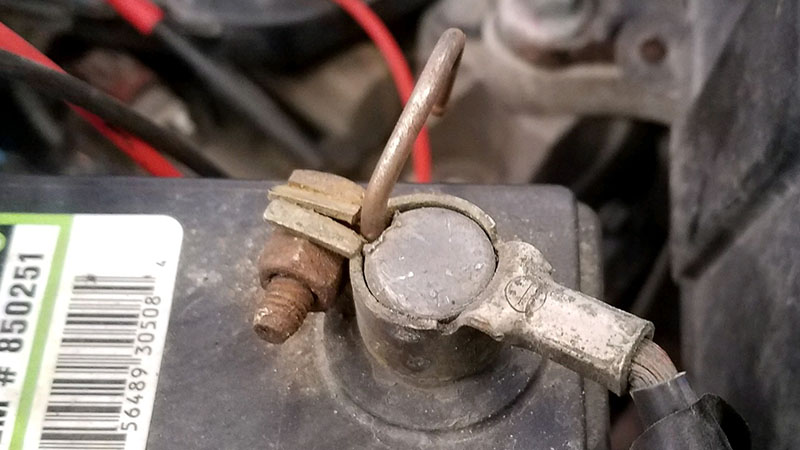 The cable ends must have been really stretched out or corrosion and previous cleaning had made them too large to fit tightly anymore. Since everything starts and ends at the battery, I got some post shims and cleaned up the battery cable to make the connections clean and tight. I cleared the codes and went for a road test, no codes were set, and the transmission seemed to work correctly. As a side note, this transmission and the following example have their original transmissions in the car, and neither has been back to the shop since.

The next example was a 2014 Honda Pilot that was towed in by the customer. The customer's concerns were that the vehicle wouldn't move, the dash lights were on, and would not shift out of the park. I did the normal preliminary evaluation and then started the engine. I got it out of the park by using the hidden button in the console by the shifter and got it into the shop. I scanned the system to find a U0122 code (F CAN malfunction ECM / PCM-VSA control module unit) in permanent memory. There were multiple other codes stored in almost every module on the vehicle.

I opened the hood to start checking things out and saw there was a new battery in the car. From the picture, it doesn't look like a new battery because of a very poor installation and a big plastic battery cover over the battery. (Figure 2) 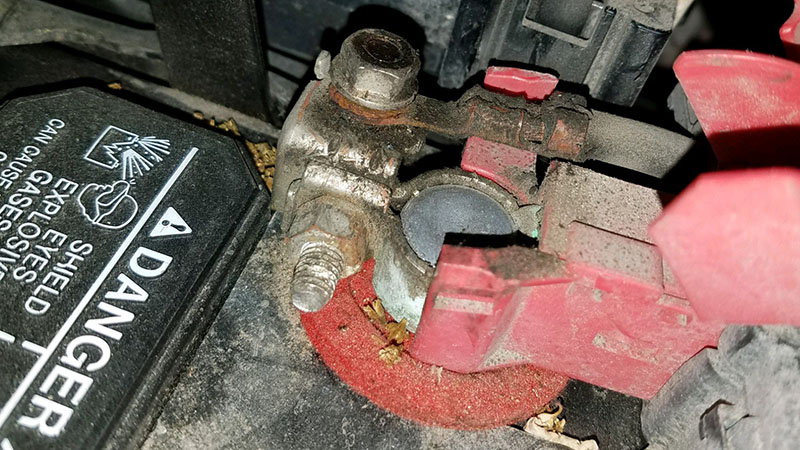 If you look real closely at the nut at the top of the cable, it was loose and was the cause of all the problems. Again, all I did was clean up the cable ends got everything tight then cleared the codes. It then came out of park normally, and I drove it for 20 miles, and everything worked normally. No codes came back, it came out of the park all the time, and the SUV never came back. Another simple success.

Our next example came from a shop that buys a lot of reman transmissions from us and refers a lot of customers to us. It was a 1999 Toyota 4 Runner. The customer's concern was that the dash light was on. This was our transmission that was purchased about three weeks earlier, so I scanned it and there was a P0770 code (solenoid E electrical). I had also noted on the repair order that the battery cable ends needed to be addressed. The negative terminal was only put onto the post about halfway. (Figure 3)

Was this an attempt at a fix? (Figure 4) 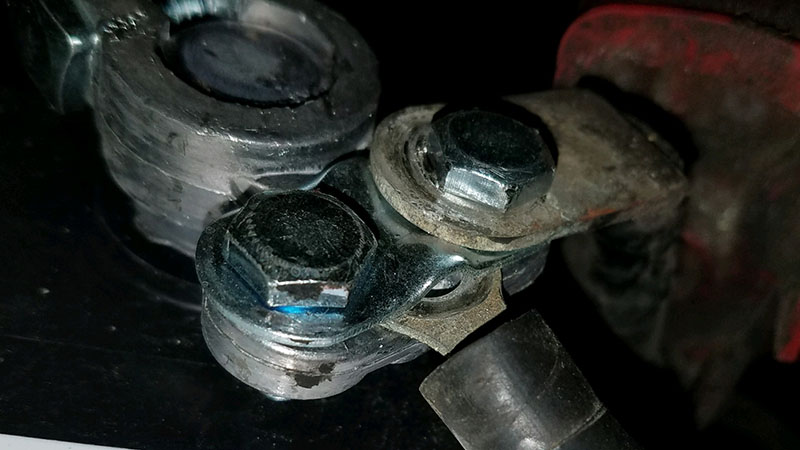 Figure four is not a permanent fix for cable ends at all, obviously. Just to be sure the transmission was OK I checked the resistance of all three of the solenoids. Remember back in the day when there were only just 1-3 solenoids? Sigh. They are all supposed to be between 11-15 Ω and these were all @13 Ω, so for the fix, we have permanent crimpable cable ends for the positive post and cleaned and reinstalled the negative cable all the way onto the battery post. I cleared the codes and delivered the vehicle back to the customer. All these issues were easily verified by a voltage drop test, and it's about the simplest test you can do right at the start of a diagnosis to prevent going down the wrong path.

One final example is one that came in very recently. It was a Hyundai diagnosed at another shop as having a bad TCM. A new TCM replacement was not available, so the customer showed up at our shop with a used TCM and just wanted us to install and program it. But wait for it? (Figure 5) 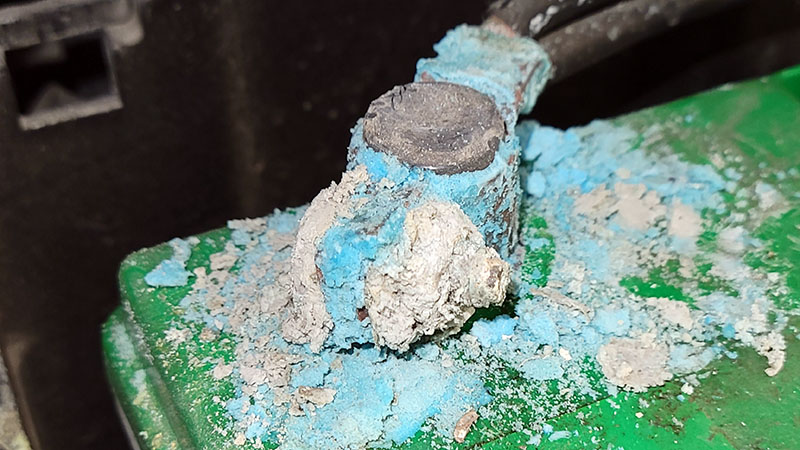 Once again, I cleaned up battery terminals and the problem was fixed. This really isn't rocket science; repair the obvious and then recheck. There is an easy fix for bad battery terminals, and it is NOT the emergency cheapo cable repair ends with the two bolts that clamp a bare cable into like what was shown in figure four. Those were never meant to be a permanent fix, yet we see shops every day using them as if they were.

Hydraulic crimpers are available from multiple suppliers, and they are inexpensive yet very functional. I was skeptical at first, so I did a test. The replacement crimpable ends are zinc-coated copper and are available at most auto parts supply stores in different sizes. I crimped one together and then cut it in half; the crimper applies so much pressure that the cable and terminal almost fuse together to form a solid piece of copper. (Figure 6) 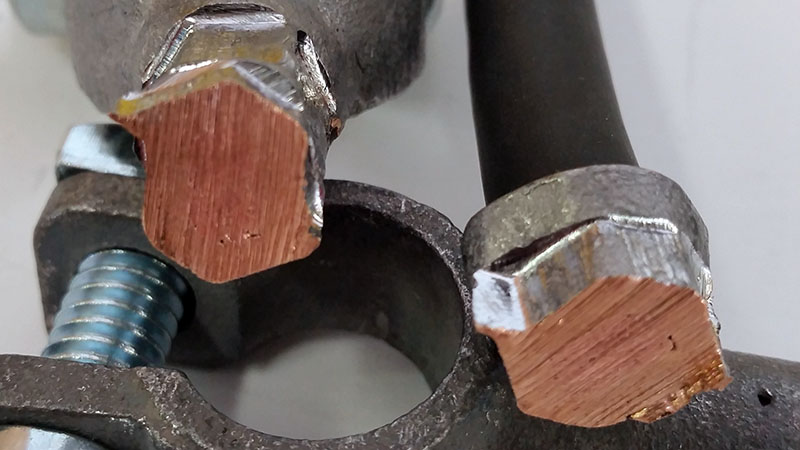 This, along with some double-wall shrink tubing results in a permanent, reliable repair.