The Case of the Cold TCM 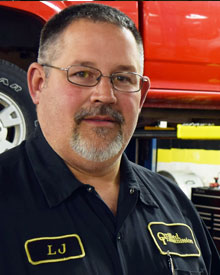 A couple months ago we had a customer contact us about a problem that he was having with his 2000 Nissan Frontier 4wd Pickup. While he had some trouble explaining the exact symptoms that were occurring, we understood that the problem only seemed to happen when it was driven first thing in the morning, and that in simple terms, "it just did not want to go". We arranged an appointment for him to drop off the vehicle with us so we could perform our initial diagnosis and evaluation after the vehicle sat outside overnight.

On the initial road test the truck seemed to drive out okay, but there was what I felt to be a slight bind up on the 1-2 shift with all else seeming normal. The next step was to get the truck into a service bay, check fluid, do a battery and charging system analysis, undercar inspection, and scan for codes. The findings of this initial evaluation indicated that the fluid was full but dark, and had a very slight burnt odor. The following codes appeared: P0325 (knock sensor), P0720 (VSS), P0725 (engine speed sensor), and P0732 (gear ratio error 2nd). There were no signs of water or glycol intrusion into the unit. While having an engine side code that related to an engine speed sensor and also the knock sensor code, I felt at this time the best course of action would be to refer him to a general repair shop to complete the engine drivability diagnosis.

The repair facility phoned us after they completed the engine-related repairs and said that there still seemed to be an issue with the transmission, so we went down and picked up the truck for further evaluation. While I could not reproduce the P0732 code, it still had a bind on the 1-2 that kept getting worse the more that I drove it. At this point, I recommended that we install one of our remanufactured transmissions. The manager sold the job and we got the transmission installed, completed the road test procedure, double-checked the complete repair and the truck was delivered to the customer. A few days later the vehicle owner called us and said that the issue had returned and the vehicle was behaving exactly as it had before the transmission was installed. This is the call we all hate to receive.

When he returned the truck for us to inspect, he stated that when he first started it up in the morning the OD light flashed very quickly and the vehicle did not have any power. The next morning was really cold and ideal for duplicating the customer?s concern. When I started the truck, I verified the customer?s concern as the OD light was blinking rapidly and the transmission was in failsafe. I noticed that the OD light seemed to be abnormally dim, but by the time I got the truck into the bay and hooked up the scan tool the OD light had stopped blinking. I scanned for codes and found none, and truck was no longer in fail-safe mode and seemed to drive normally at that point. So what changed? I did not move anything and did not even open the hood, so how did it fix itself? This was puzzling.

Once again I left the truck outside in the cold for several hours until the problem reoccurred, and when I hooked up the scanner I discovered that the scan tool had no communication with the TCM (Figure 1). Communication was okay with the ECM and ABS modules, but not the TCM. I proceeded to check the power and grounds to the TCM, and all connections and wiring seemed to be in order. By the time I got done with these checks, I realized that the TCM was communicating again with no codes stored. 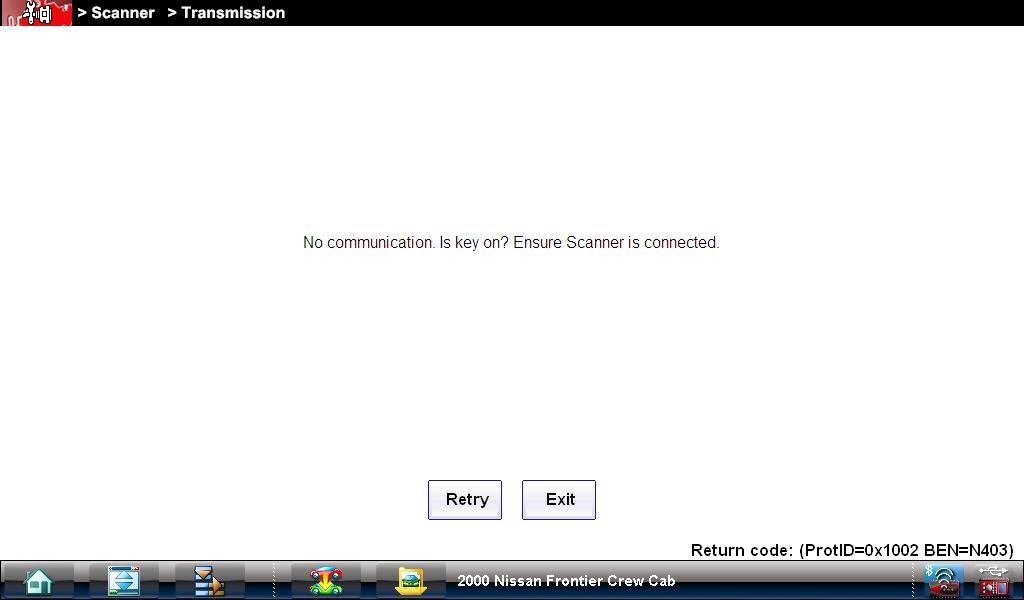 The only solid lead that I had was that I could always reproduce the issue when the vehicle was cold, and the TCM had no communication which seemed to be at the heart of the problem. Focusing on the TCM itself, I removed the module from the truck and placed it into the freezer, leaving the truck inside our warm shop. After a couple of hours, I retrieved the TCM from the freezer and reinstalled it into the truck, and wala! The OD light was dimly blinking and the TCM had no communication with the scan tool.

To speed up the process and test the theory, I grabbed my heat gun and started warming up the TCM (Figure 2) and fairly quickly regained communication with the TCM. 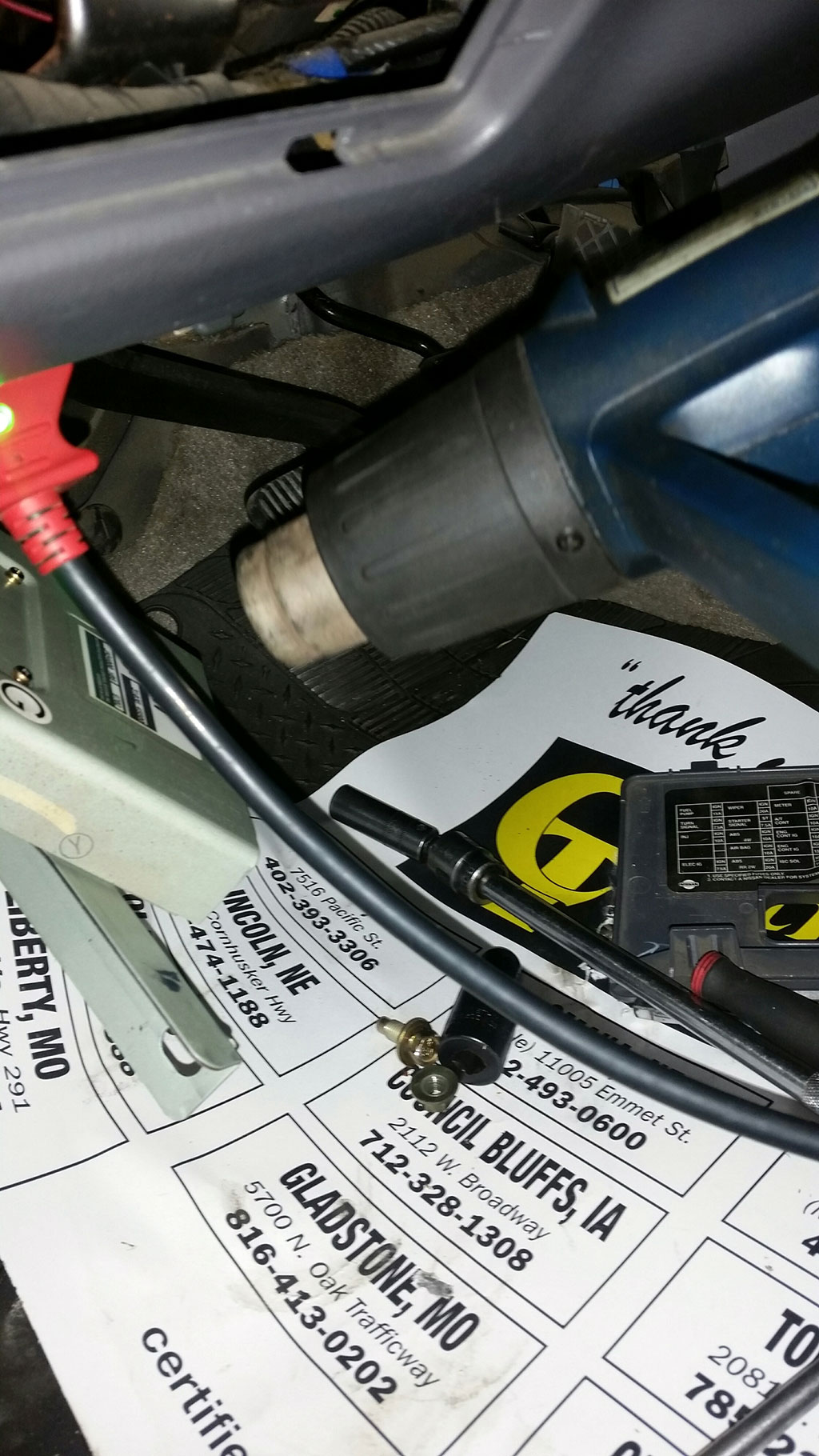 It also had a P1605 code in the ECM (Figure 3). I repeated this testing sequence again just to make certain that this was indeed the problem, and sure enough, got the exact same results. 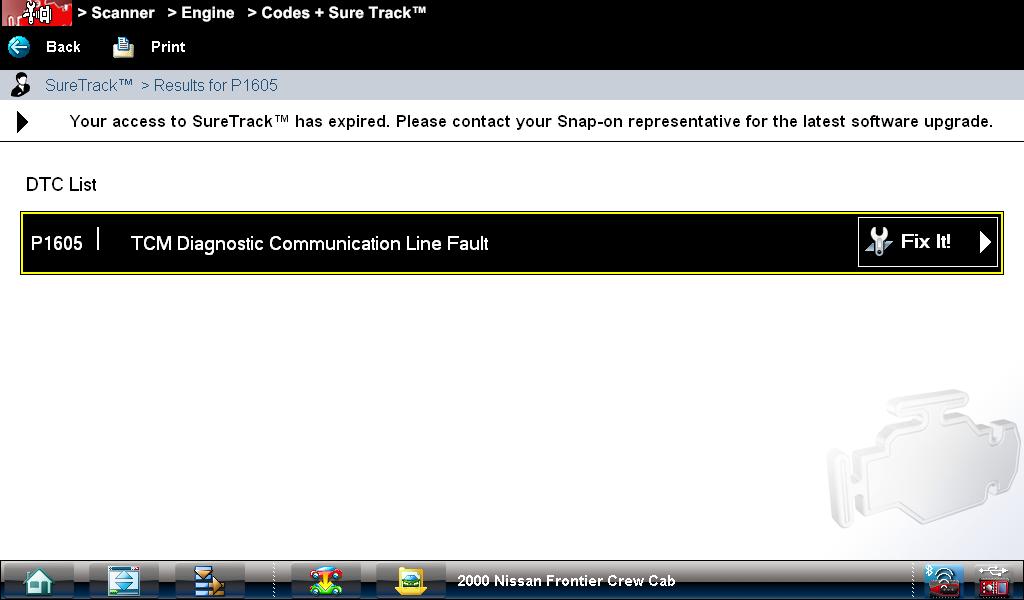 A new TCM for this vehicle is a 2000 model year-only application and was priced at more than $500.00. Since I had never replaced a TCM for this application and none of our other 14 locations had either, I figured that a used TCM would be a fairly safe bet and picked one up at a local salvage yard for $75.00. I installed the used part and everything worked as it should. Just to be on the safe side, I took the used TCM and dropped that in the freezer also and it worked even when frozen. We returned the truck to the happy customer a couple of months ago, and the vehicle owner reports that all is well.

In the end, the experience was a very unusual one. The decision to replace the transmission was in part due to the fluid condition, but the root of the problem came down to intermittent TCM operation caused by cold temperature conditions. The key to solving these types of issues is to remain persistent and find the common links to the problem. If you can isolate the clues to a handful of repeatable conditions, it won't be long before you solve the problem and win the customer.