A few months ago I wrote an article about Diesel Tuners in reference to keeping the software updated and some of the issues that can arise if they aren't. This go around I will touch on something similar but different at the same time: vehicles that have 3rd-party programming installed, but there is no tuner that you can hold onto or plug in and update. This is hardware that has the ability to pull the factory calibration from the ECM/TCM in order to be edited, and then flashed back into the ECM/TCM. HP Tuners and EFI Live are the "big-two" so to speak, and there are a few up-and-comers entering the market but for the most part these are the brands that are the most widely used and can give us some headaches.

I will start out with the disclaimer that I am in no way an expert on the use of this software, but I have been involved with it and even modified a couple of TCM's for 6L80 units. I figured that I could touch on a few things I have encountered and maybe save someone comeback or even know when to avoid a job if you are not comfortable with it. While there are shops out there that feel confident in tuning vehicles and have the appropriate expertise, there are just as many that THINK they know what they are doing but really don't. These are the tunes that will wreak havoc in our lives. This software is very powerful. Whether it is HP Tuners or EFI Live, they both accomplish the same thing; it's just the user interface that differs in appearance. Just to keep it on the simple side, all of the screenshots referenced in this article will be from HP Tuners software.

So, how do you know if a vehicle's computer has been modified with this software? Good question. The people that program the software are very smart, and this is true also with the hand held tuners. Most will not change the calibration # when you look at it with your scan tool, so this is where the website https://tis2web.service.gm.com/tis2web for GM comes into play. I know that everyone that goes to the yearly technical seminars from ATSG or others has heard of or seen this website. Comparing the CVN# from the website to the one shown on the scan tool is the only way I know to confirm that tuning has taken place, beyond asking the customer. If you suspect programming and the owner does either not want to admit to it, or genuinely does not know, what I have found is that if you tell them that you will be reprogramming the ECM/TCM with the factory software and the vehicle is tuned, it will wipe out the aftermarket tuning. At this point they will either spill the beans, or walk away. Programming isn't cheap.

The 6L80/90 series units seem to be the most popular GM applications that we see, and the focus of this article. There are so many different parameters in this software that it will be impossible to show you all of them, so I will do my best to show you some examples and you can fill in the blanks from there. In this image I am highlighted on the Auto Shift Speed tab and all of the "buttons" that you see will bring up a table: "Normal" is the 1-2, 2-3 & 3-4 shift tables which will also include the downshifts of the same gears, the 5th & 6th will be the corresponding 4-5 & 5-4 or 5-6 & 6-5.

In the tables below, Full Throttle Shift Speed for Normal, 5th & 6th and you can see that the 2-3 shift at WOT is commanded to happen at 56mph. For an example of how a shift is disabled look at the 5-6 table as it is commanded to happen at 311mph. Since it will never see that mph, the 5-6 will not happen at WOT in a stock calibration. However, this can be changed in the software to whatever speed you want above the 4-5 command: 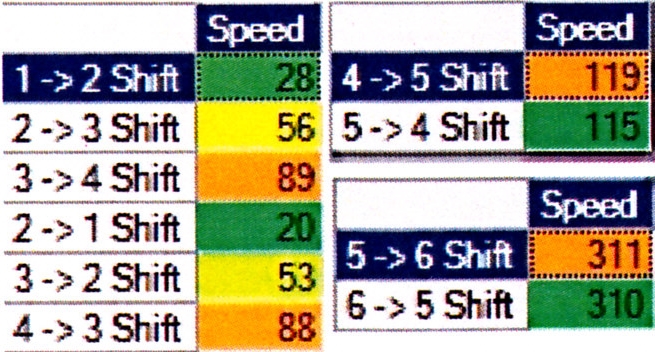 Now we can move onto Shift time, shown in the next image. This is the transition time from one ratio to another measured in seconds and uses the Turbine speed sensor for reference. As you can see, there are multiple different tables that can be accessed. Some are base tables and others are modifiers, meaning that one table can either modify, or even replace, a base table if certain parameters are met: 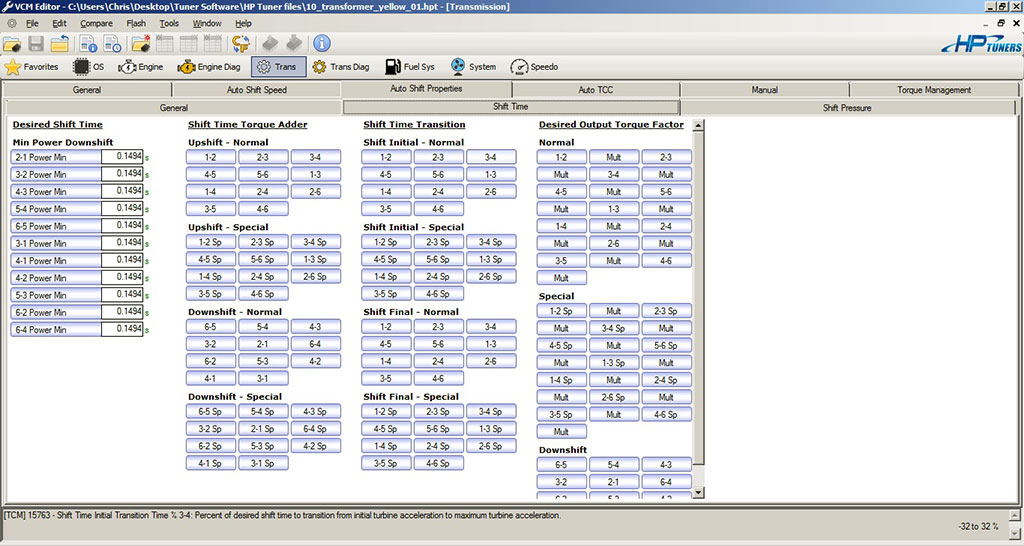 In the next image we will look at the Shift Time Torque Adder Upshift-Normal table, this is a "RPM over Torque" table. This will have a direct affect on shift feel, and the lower the number, the quicker or firmer the shift is. So in this example, at 6250 RPM's and 295 lb-ft of Torque input the commanded shift time is .3994 Seconds. This table can be modified in several different ways; you could change the entire table by a certain percentage or a set amount of time, or even just change individual blocks to whatever you would want. One thing here that can really mess with the transmission is the torque table, or "load factoring" that is generated on the engine side of things; if the load factor is not correct it will have an adverse affect on any table that uses a torque input for calculations, very similar to a skewed MAF sensor. The shift time in these tables (the calculated total shift time that the computer wants to see) is where the shift adapts come into play. If the actual time is greater than what is commanded, the TCM will try to shorten the shift time for that load point. Although the 6 speeds work a little differently, you still can compare this to "Tap Cells" that everyone has seen on the 4L60E or 4T65E:

In figure 5 we see the Shift Pressure tab, and boy, what we could go into here. As defined: 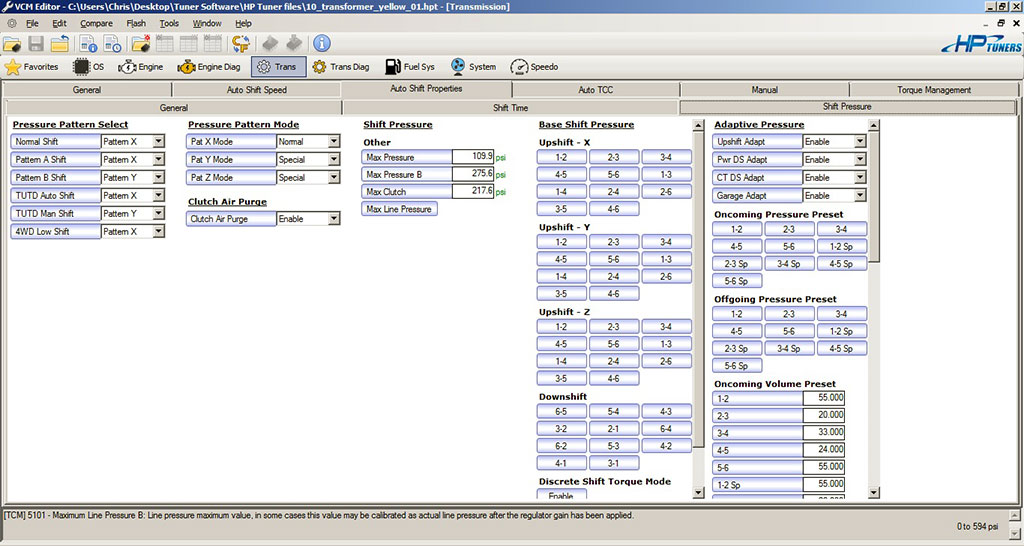 In figure 6 the Max Line Pressure table is shown, and in figure 7, Base Shift Pressure 1-2 Pattern X: The base line pressure (main line feed pressure solenoid) during a shift:

The next image is the TCC Tab which has control over the TCC Pressure, Slip Speed, Adapts and Apply and release speeds: 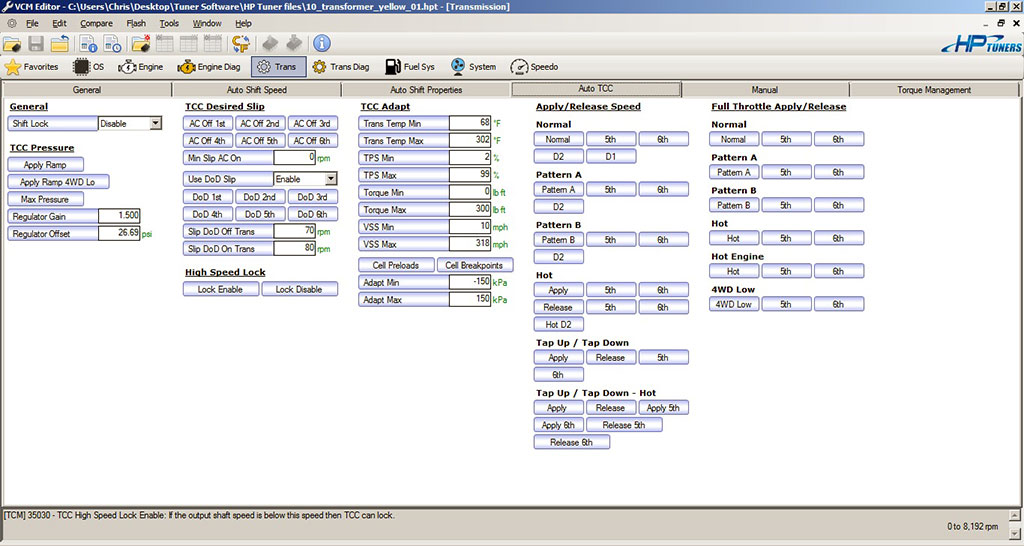 I am not going to go into much detail about the TCC Tab because we need to move onto another section that I believe has more of a negative impact on a transmission lifespan, and thus more important to know. 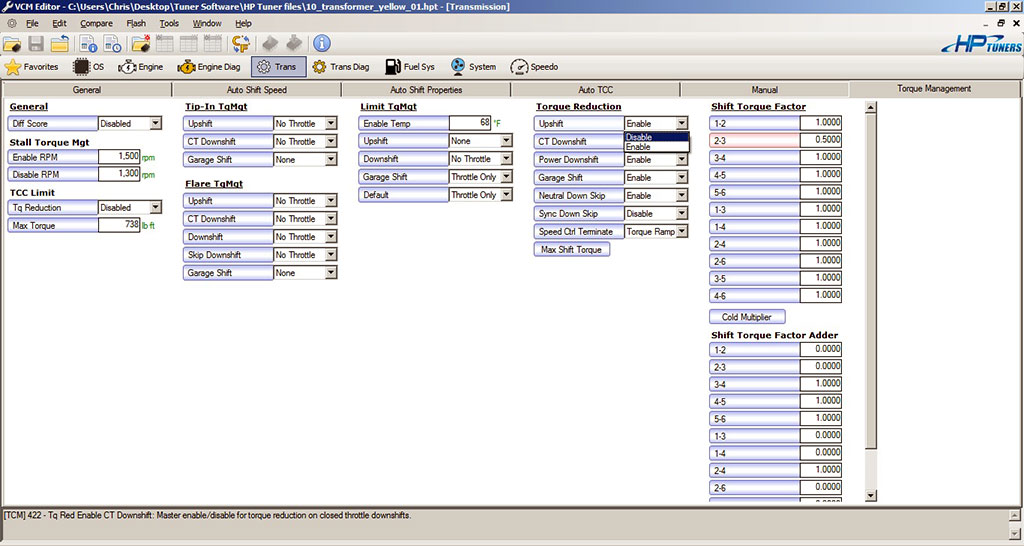 Almost all late model electronically-controlled transmissions have Torque Management built into the software. TM comes into play during the shift transition, as even at stock power levels, the OE limits the torque input to the transmission during shifts. The "Shift Torque Factor" where it shows 1.0 is 100% TM, and that's what it is set at from GM. This can be changed to anything lower, and in this example I changed the 2-3 to 0.500, which is 50% TM. If you look at Torque Reduction where it shows Enable/Disable, this is where you could completely eliminate TM on any of the parameters listed. Doing so is a critical mistake and has the ability to destroy a transmission, especially on a modified vehicle. It is not uncommon to see a Camaro or Corvette that is either Turbocharged or Supercharged that has 700-1200 HP at the rear wheels, and while it is possible to make a transmission survive in these vehicles, extreme attention to detail has to be used while building the transmission in addition to and modifications to the vehicle's computer programming.