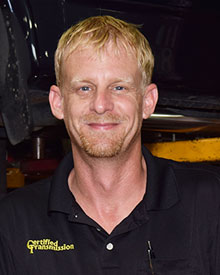 Recently, we had a customer drop off their 2007 Ford Fusion at our shop with concerns that the transmission stops shifting, the speedometer quits working, and the MIL is on. Upon the initial verification and diagnosis, a DTC scan revealed a P0720 code stored in memory. My initial thought was a faulty Output Speed Sensor (OSS). Failing speed sensors on these vehicles are not uncommon. In most cases and without a second thought, most technicians would simply replace the speed sensor. However, this vehicle exhibited something strange on the road-test. Wanting to investigate in detail, I pulled up the PIDs for the Output Speed Sensor, the Vehicle Speed Sensor (VSS), and a few others I thought would help isolate the issue.

The output speed was also following this pattern. At this point I was quite sure the sensor itself was okay because there should be no affect on the sensors themselves based on acceleration and deceleration activity. It seemed that something out of the ordinary was happening, and it was time to put a scope on this sensor and see what was going on.

Battery power is supplied on pin 3 white/violet wire. The speed signal back to the TCM is on Pin 2 brown/green wire, and the ground is on pin 1 black/green which goes to G102 at the rear of the engine compartment (behind the battery). (Figure 3) 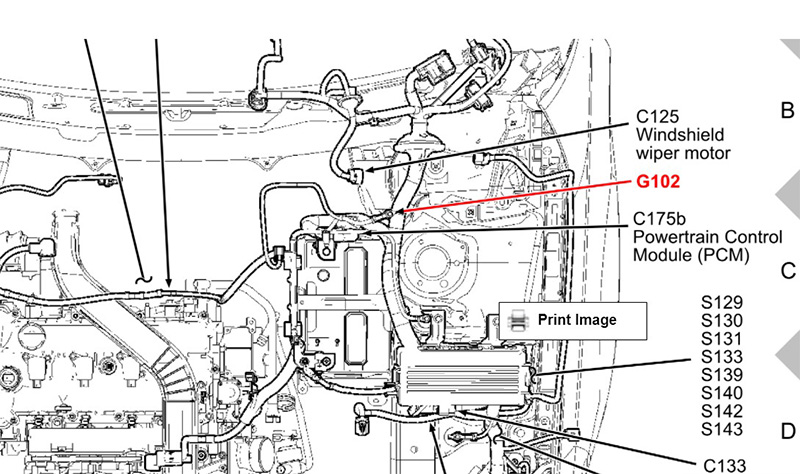 I connected the yellow scope trace to the B+, red trace to the speed signal and the green trace to ground. As I drove the vehicle the pattern looked okay, at first. Then when I was able to manipulate the throttle, I could see the problem. The speed sensor signal and ground were both going near battery voltage. This would be a clue I could use to determine where the fault was.

This is a simplified version of OSS function. The sensor is supplied B+ voltage to power the circuit and a ground to complete the circuit. The signal wire cycles from zero volts to 5v as the magnetic field passes and the duty cycle (on/off time) is relative to the speed of the vehicle (taken from the differential, in this case). For the circuit to work there must be current flowing through the sensor. When current flow stops, the sensor can no longer work. I look at three-wire sensors like I would a TPS, for example, although the TPS uses a mechanical function instead of a magnetic field to pass signal voltage. (Figure 4)

In either case, we need power, ground, and the signal return for the circuit to function. If any of those circuits are compromised, the sensor fails to supply the information to the computer, codes will be set, and malfunctions can occur.

While taking a closer look at the scope capture when the event occurs, we see that battery voltage stays relatively steady. The speed sensor is cycling like it should and ground is about 0.04v. (Figure 5)

During the malfunction event the sensor signal back to the TCM and ground is over 10.0v. (Figure 6)

Why would that happen? It is a simple voltage drop test. If your circuit is complete with the ground at 0.04v and B+ supply at 12v, the signal or load will function properly. If you remove the ground, the load will no longer work, and you will see B+ voltage everywhere you test along the circuit. (Figure 7)

Basic electrical principles: if voltages are high on a circuit, grounds are absent or compromised. If voltages are low or at zero, a short to ground exists or supply voltage is compromised. This is very simplified but helps us understand what is going on.

While I still had the scope connected and was driving, I decided I would jumper a ground from the green trace to the scope ground (which was connected to the battery), which I could do right from the driver?s seat. The result was a properly functioning circuit. (Figure 8)

The alternate ground cured the malfunction. I continued to drive the vehicle and was able to verify the concern was corrected while the jumper was in place. When I returned to the shop, I performed a visual inspection and a wiggle test on the connector and the harness. I was unable to see a change in voltage. I removed the G102 ground and cleaned the mating surfaces, fabricated a new ground wire, then spliced it into the connector at the sensor. The next road test confirmed the speedometer and speed sensor issues were corrected, all functions were normal, and the code did not return.

We all want the easy fix, the silver bullet. We want to get the vehicle in, diagnosed, repaired and back on the road quickly. As proven in this case, the process of taking these extra steps to find the root cause of the issue took less time than if a sensor was wrongfully replaced, only to find out that it did not fix the problem. We also saved the customer money and proved that we are a shop that gets the job done right the first time. I am a strong believer that, especially with electrical/electronics, if you cannot prove the part is bad, you shouldn?t replace it. Follow the steps and do it right.