Today's topic is in regard to the common complaint of intermittent and erratic torque converter clutch cycling between 45MPH-60MPH experienced in Dodge Cummins Diesel pick-ups from years 1998-2003. After 60MPH, the issue seems to go away. This has been a well-documented problem over the years with many bulletins published from the manufacturer.

When the issue first showed itself several years back, it seemed like reprogramming the PCM, cleaning the battery terminals, removing paint from the body ground point, and reconnecting the wiring was the cure. As the years went by, things began getting worse, and also more difficult to correct. One very popular fix was to install a noise filter on the TPS signal wire back to the PCM, as the cause of the TCC cycling problem was a noisy or erratic TPS signal. This is generally common knowledge, and most have seen graphs and screenshots of the erratic TPS signal. What has always bothered me is, why? Why does a truck that has worked fine for years all of a sudden need a noise filter installed to make the transmission work properly, as designed?

My recent experience involved a construction worker's truck, specifically a 2001 Dodge 2500 Cummins Diesel. A wholesale customer that specializes in diesel engines had been working on this vehicle, attempting to diagnose the cause of the TCC cycling in and out. I started my diagnosis with the usual procedure: connecting the scanner, checking out the fluid, and going for a road test to confirm the problem. Sure enough, the TCC was cycling in and out, so I took a quick screen shot of the scan tool data, and as you can see in Fig. 1, the TCC is actually being commanded by the PCM to go in and out, and the transmission is responding as commanded. 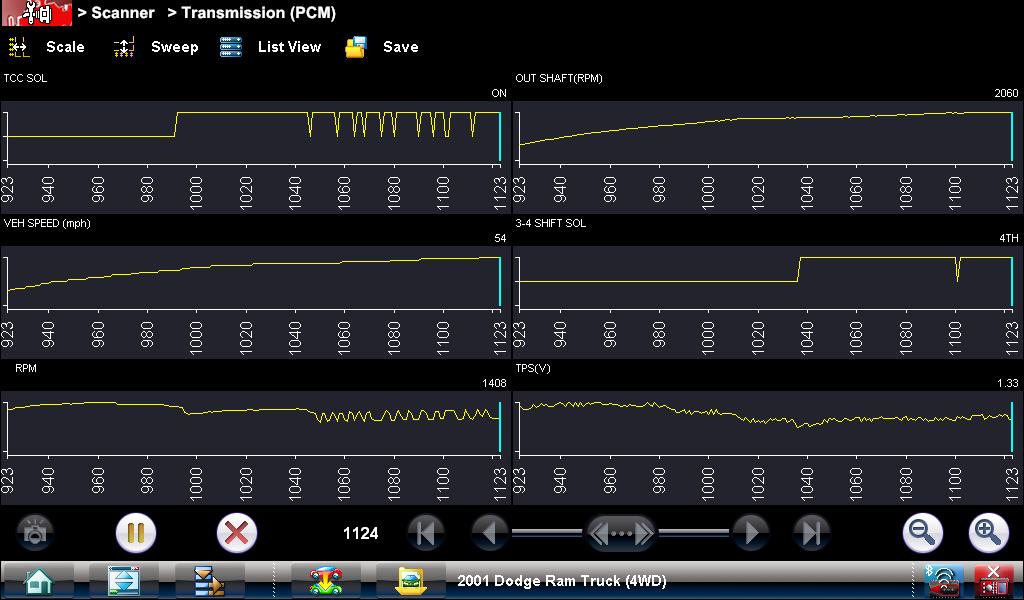 I took the truck back into the shop to check the battery for corrosion and inspect the body grounds; everything was clean, and it appeared that someone had just done exactly what I was going to do. To be sure, I did it again because, up to this point, that fix had been working. Despite my efforts, no dice.

Well (as I scratch my head), what now?

I went to the check-list, and started with a charging system test with the Midtronics ESP-1000 tester (this is the higher-end tester from Midtronics which we have found to be really reliable and accurate). Sure enough, the alternator had excessive ripple of over 750MV. Seeing this, I unbolted the alternator V+ wire, and took the truck out for a drive. It didn't act up at all. It appeared that the excessive electrical noise from the alternator was causing the issue, so we sold and installed a new alternator, drove it some more, and still had no problems. It was working great. We handed the customer back his keys, and off he went.

This is where that "intermittent" word starts biting me in the "you know what". Two days later the customer is back with the same problem, and he isn't a very happy customer at this point. My manager showed him the old print out of the charging system, showing him what we saw, and why he needed an alternator. We took him out to the shop, tested his vehicle again, and compared the two sheets for him to see what we were talking about. He agreed with us there was a problem there with the alternator, but, since it is still happening, there is something else going on there. We told the customer that we were going to need more time with the truck. He said it is his work truck, and without the truck he can't make money. We agreed that on the next rainy day, he would drop it off with us. A few days later, it was back at the shop for testing.

Back to my check-list.

The system had no codes in it; the PCM was up to date, APP readings were good, throttle linkage working great with no play in it, and the engine was running good. I thought to myself, "Am I going to have to install a noise filter on this truck?" I did not want to, but if I did not find something causing it I might have to. 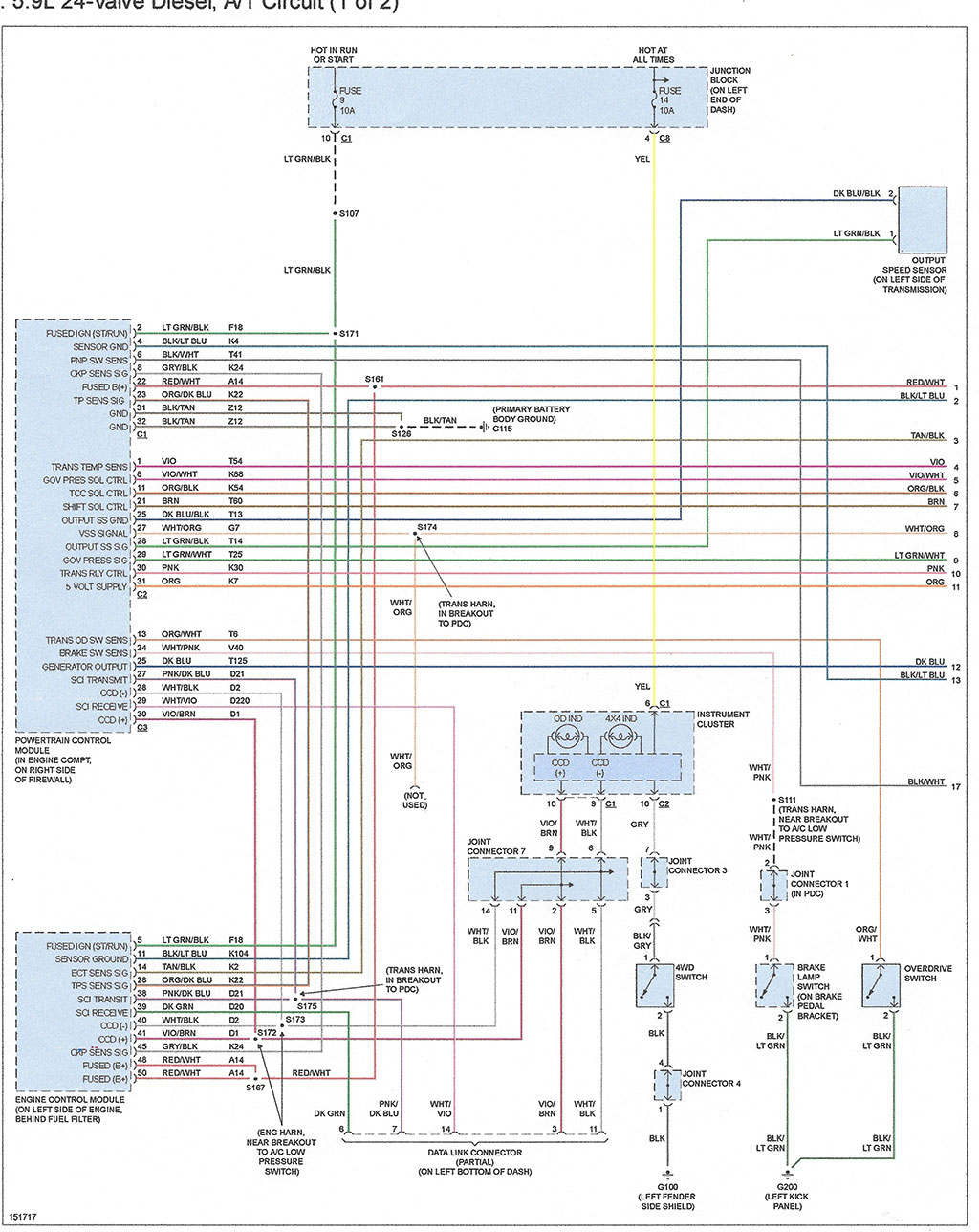 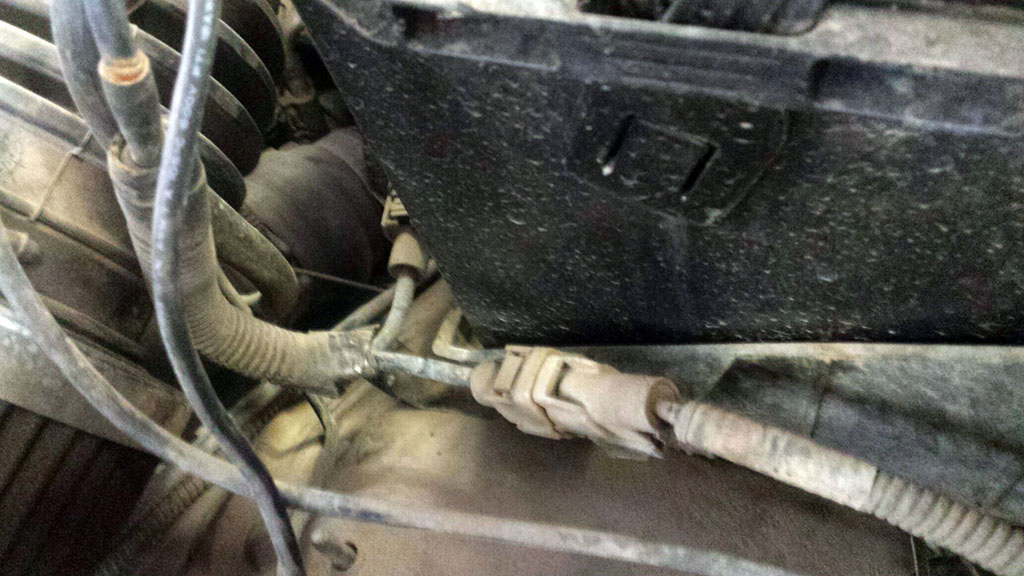 I proceeded to do a voltage drop test again, and for the third time I really didn't see anything that raised a red flag regarding poor grounds. Across the two spade connectors referenced in figure 3, there was only a small amount of voltage drop, so I pulled these connectors apart looking for corrosion or anything else that could be wrong. I found no problems there, so I put a little dielectric grease on them and plugged them back in. At this point I was desperate to find the real issue, so I decide to eliminate these connections entirely. We use a hydraulic battery terminal crimper to repair cable ends, so I got a couple of 4-gauge solderless butt connectors and cut the wires on each end of the spade, then crimped them and sealed them with shrink tube. 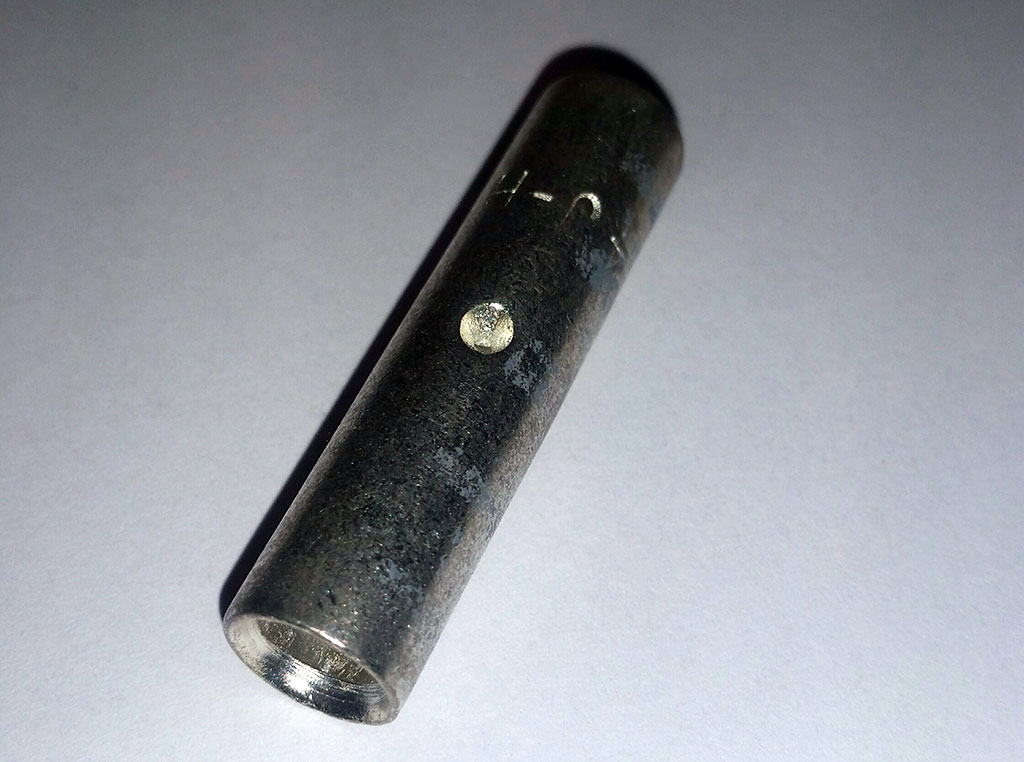 After completing this, there was virtually no voltage drop. Off for another road test, I have a pretty good feel for this truck by now and have been able to get it in the right situations for the problem to duplicate fairly consistently. This time everything seems to be working as designed, but I wanted to have more time with it to verify the fix 100%, but the owner is up in the office to pick up the truck when I got back, working or not. He drives off and says he will bring it back on another rainy day.

One week goes by, and we don't see him. A second week goes back and still nothing. So by this point, I've kind of forgotten about the truck getting back into our daily work routine. A couple of months later, another Dodge shows up with the same problem. At this point I got to wondering what happened to the other one we had this problem with. I had the manager look up the paper work for that customer, to give him a call and see how that truck is doing. He says it is doing great, and hasn't had that problem since. Awesome!

With the truck I was now facing with the same problem, I figured I would eliminate these connectors just to see what would happen. Once completed, I rechecked it and the problem was gone.

There is a lot of talk about noise filters, and Identifix has 27-plus fixes using noise filters. What I'd found is that in lieu of installing a noise filter, eliminate these connectors and make sure there is almost no voltage drop in this side of the circuit. If you compare the snapshot shown in figure 6 after the repair, versus before the repair as shown in figure 1, you can see that the TPS voltage is a lot smoother and the TCC problem is gone. 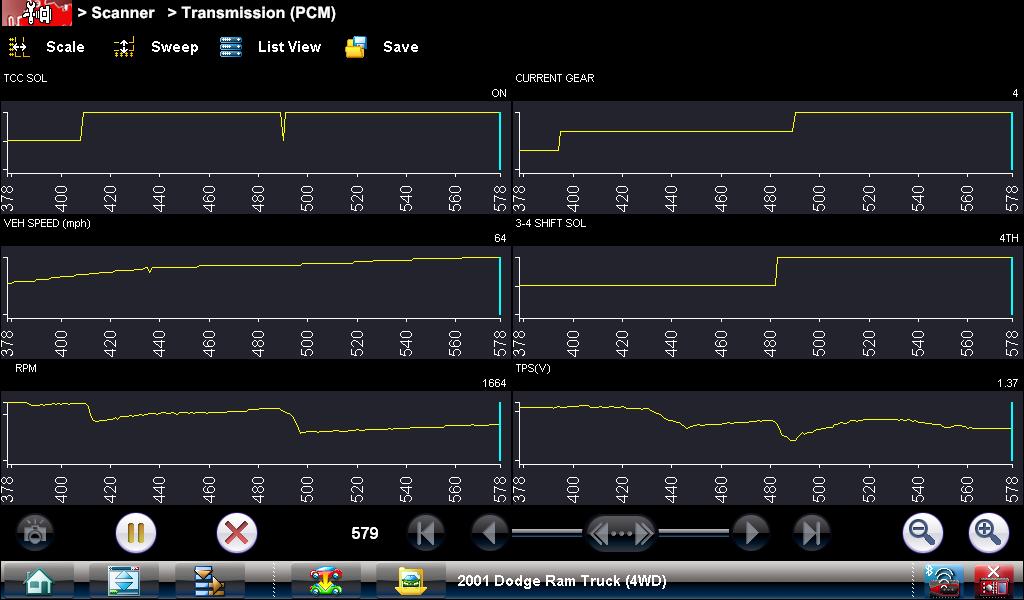 There is one spike on the TCC when it goes into 4th gear, but that is normal and how it is designed to work. Since the first truck that was repaired in this fashion, I have performed this repair on more than 20 trucks and in each case, never seen a comeback.