Once Again: Check Those Grounds 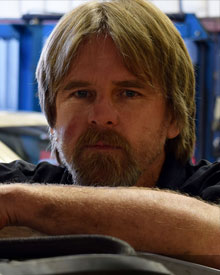 However, one thing that has remained fairly constant through the years is the wiring that connects to all of those "magic boxes". Copper wires in a vinyl sheath; seems simple enough. Where it gets a little complicated is with CAN network protocols, module connectivity, and the like. It's easy to suspect these things when diagnosing a customer issue, and just as easy to forget the basics. The following cases involve the latter: basic wiring issues creating a customer complaint.

A while back I had a call from a neighbor who was experiencing some shifting issues in his 1996 Ford F250 in which we had installed a remanufactured transmission into a year ago. He told me it was kicking in and out of gear on the highway. I made plans to go for a ride with him after I got off work. When I arrived, I checked for codes and found none. The condition of the transmission fluid was good, and during a 20-mile ride it shifted great. He explained that it had acted up on his way home from work the night before. Based on his explanation, I told him that it could possibly be dropping in and out of torque converter lockup. We just needed to prove that theory.

Since the PIDs on the scanner looked good and there were no codes present, I told him we needed to clean the grounds first, and then see what happens. Since he has some mechanical ability, he said he would do that and let me know. A few days passed and he called to tell me that it was still having the same symptoms, but he noticed it only happened with the headlights on. Since he had to get to work, we made plans to drop the truck off at my house so I would drive it into the shop the next day.

As I drove the truck in the next morning, I was able to confirm the concern. He was exactly right: the truck only dropped in and out of converter lockup with the headlights on. Now that I knew we were on the right path, I now needed to find the root cause of the issue.

A quick inspection under the hood indicated that the battery cables were clean on both batteries and the grounds had been cleaned. Next, I checked the lights. I checked turn signals, marker lights and headlights on the front of the truck. While checking the rear lights I noticed that the right rear park light was dim as compared to the left rear. I ran a jumper wire from ground to the taillight and it brightened up. I then repaired the taillight ground, and after a test drive I knew the problem was fixed. The truck has been running great for six months now with no problems.

Correct taillight operation is crucial to the torque converter lockup circuit. Bad grounds, EMI, intermittent shorts and opens can all contribute to issues in that system. Simply checking battery grounds is not enough. Remember to check trailer wiring, also.

My second case involves a 1995 Chevy van, and came into the shop with the complaint of not shifting with the headlights on. The van has a 5.7 engine with a 4L60E transmission. The transmission fluid was correct and clean and there were no codes stored. My initial road test was with the lights off to see if the transmission operated correctly. The van shifted through all of the gears and went into lockup without a problem.

My next road test was with the headlights on. The van started off in first gear, but would not make the 1-2 shift. There were no codes set, and the 1-2 shift was not being commanded per PID data. My initial thought was a possible ground problem with the light circuit, so I printed out a wire schematic of the headlights and taillights to review. While under the hood of the van I noticed that someone had been in there previously, apparently repairing some type of an electrical problem. I noted that the van had a new battery, two new battery cables, and a new alternator.

While reviewing the wiring diagram, I located the headlight ground on the left side of the radiator support. There were three wires coming out of the wire loom bolted to the radiator support, and a frayed wire on an eyelet going nowhere. Looking at the new negative battery cable, I saw that there was an accessory ground pigtail with an unused splice connector attached to the end.

I removed the broken eyelet from the radiator support and then cleaned the accessory ground ends. I ran a new wire down from the negative battery cable to the radiator support ground, and then performed an electrical test to verify the starting and charging system were working properly from the previous repair. After road testing the van with the headlights on, I confirmed that the transmission was now shifting properly. The van was returned to the satisfied customer.

Each of these cases had its own cause: environmental exposure and age in the first case, and a careless DIY'er or tech in the second. Regardless of the cause, the cure was common to them. Grounds are easy to overlook; it takes a little more testing to prove that a ground is bad. However, they cannot be ignored, and in many cases, will fix those electrical gremlins that we love to chase.