I have covered some general concerns that have arisen from aftermarket tuning devices and software in a couple of previous articles. I don't want to sound like I just keep repeating myself, but the problems keep coming through the doors making this an ongoing relevant discussion. I don't know if it's just because I am more aware of these issues and maybe look for them more than some folks do, but somehow these vehicles find their way to our shop after the consumer has been bounced around from shop to shop before they get referred to us. In this article I am going to cover one specific issue that I had ran into a few months back.

I will start by saying that getting ALL of the information from the customer is a crucial step in the diagnostic process; it can save you time and headaches if you have everything that you need from the customer before you start, and this story is a good example of this.

A 2006 Chrysler 300C shows up at the shop equipped with the 5.7L Hemi engine backed by the NAG1 (722.6) transmission. The customer was complaining about harsh coast downshifts and dropped the vehicle off with us for an evaluation. No other information was provided, and whether he did not offer additional details or if the service writer who was assisting the customer did not ask for any of the previous history of the vehicle, this was the first step where we could have done better.

Moving forward with the evaluation, we have detailed procedures including but not limited to, a battery/charging system analysis, complete module scan for DTC's, road test, visual inspection, and TSB search. During the road test the vehicle did have pronounced, firm downshifts on the 3-2 and 2-1, but the upshifts also seemed to be firmer than desired. There were no codes but the visual inspection revealed there were some performance enhancing modifications done, mainly exhaust headers, deleted catalytic converters, and a "cold air" intake. The first thing that I would have normally done at this point would be to hook up a pressure gauge, but thanks to Mercedes engineering, we have no line pressure tap we can use for testing.

TSBs only showed one thing that was sort of relevant, but not exactly what we are after: an ECU software update for 1-2 upshift shudder and/or roughness. Not really what I am looking at, but I do know that I have had reprogrammed ECU's before that have fixed a concern that was not detailed in the description of the TSB. At this point I am going over everything in my head before I make a recommendation on how we are going to proceed, and I have that a-ha moment: remember when I mentioned that the catalytic converters were deleted and also stated that there were NO codes? How could that be? Why were there no P0420 or P0430 for catalyst efficiency codes if there weren't any cats? Somehow the monitors for those codes had to be turned off. Maybe a tuner was installed, but is that what is causing this issue? We needed to call the customer and get some more information.

And now, the rest of the story (as Paul Harvey might say). After talking to the customer, the vehicle did have a tuner installed, from DiabloSport [Figure 1]. Furthermore, another shop had installed Mercedes AMG solenoids (visually identified by the blue cap) that run higher output pressures than the regular old 722.6 solenoids. Both the other shops this vehicle has been to just told him that the coast downshift clunks were just a side effect of the AMG solenoids and there was really no fix, and while this may have been true, I am not one to go by anyone else's diagnosis. I needed to find out for myself what exactly was causing the problem. 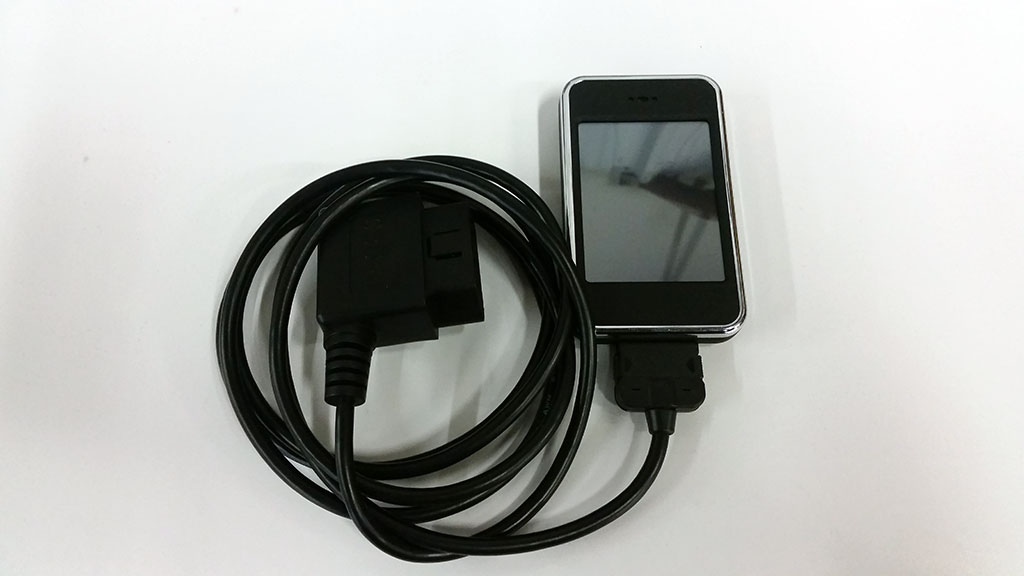 The customer was hesitant to spend any more money because of his past history with the other shops, given that he was not provided a valid answer to his shift issues, but I assured him that I would figure out what was causing it and what we could do to fix it. To start I wanted to make sure that this was just not some type of software issue caused by the OE programming, or from Diablo. The first step was to uninstall the tuner, and then use the Chrysler WiTech scan tool to update ECM, TCM and ABS module. I also used the Diablo update utility to get the tuner updated and reinstalled the tuner making no additional changes.

On the initial test drive all the upshifts were pretty firm, but I still had the harsh downshifts from 3-2 and 2-1 after several shift cycles the 1-2 and 2-3 seemed to get better. None of the other shifts seemed to be any different at all; was this just a case where the computer can simply not adapt to the higher output pressure of the AMG solenoids? I uninstalled the tuner again (which I probably should have done this from the start), and drove the vehicle without the tuner installed. Right off the bat the shifts were noticeably different (softer), and after several shift cycles the computer adapted the shift feel and everything (including the downshifts) felt normal. At this point I was really thinking that the tuner is to blame. One thing that we have learned over the years is to test and retest, and also to ask yourself, "Can I duplicate the problem again?" I decided to reinstall the tuner and find out if I could duplicate the problem, and sure enough, when the tuner was installed the shift feel changed and the downshift clunk returned. At this point I knew that the tuner (rather than the solenoids) was causing the issue, but why? More importantly, how do I find out why?

I have an HP tuner interface that I covered when I wrote about the 6L80, [Figure 2], so I looked to see if this Chrysler was a "supported" vehicle, and sure enough it was. 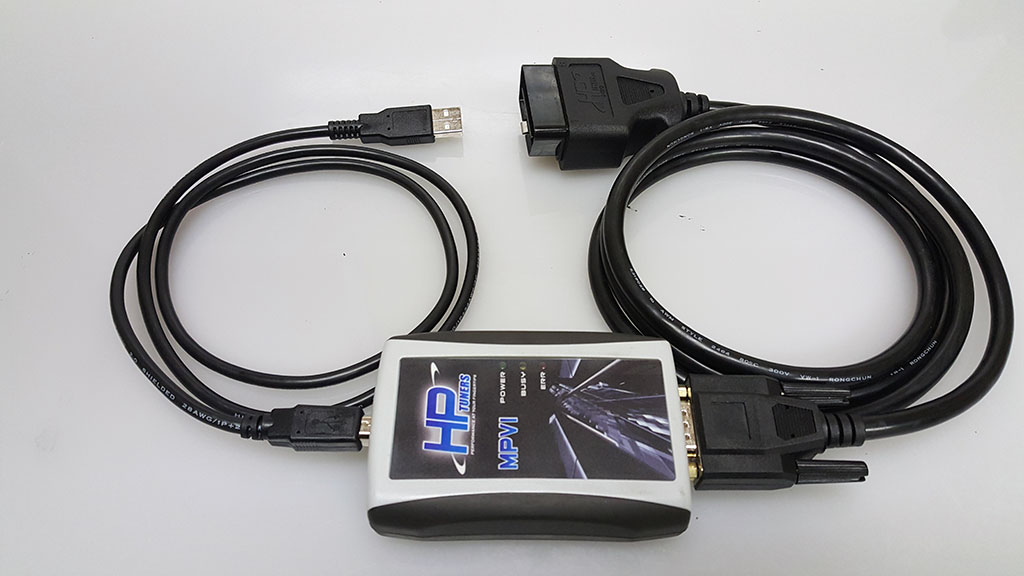 This gave me a way to see the details of the tune. This type of software, whether it be HP Tuners, EFI Live, or something similar is the only thing that gives this type of X-ray vision to see inside the table values of an ECU. The next step was to reinstall the tuner and hook up the HP tuner interface. After "pulling" the tune out of the vehicle and looking at the many editable parameters, something caught my eye: it was under the "adaptive" tab [Figure 3]. Was this the root cause of all of the issues? It sure looked like it could be. 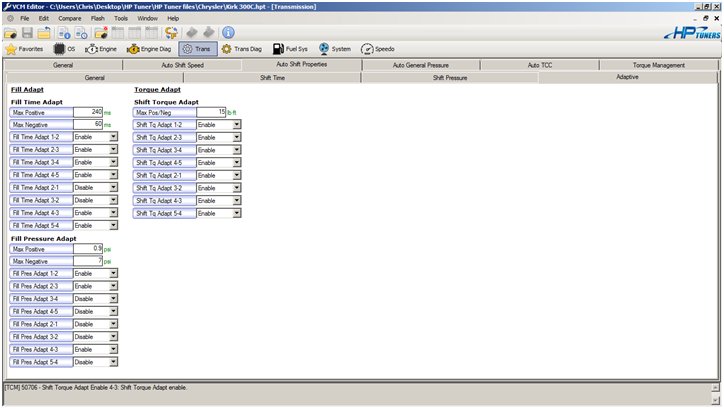 The "Fill Time Adapt" for the 3-2 and the 2-1 downshifts had been disabled within the tuner. Also, the "Fill Pressure Adapt" for the 3-4 and 4-5 upshifts as well as the 3-2 and 2-1 downshifts were also disabled. Before I went any further, I did something I hadn't mentioned earlier. After I had reprogrammed the vehicle back to stock programming with the WiTech, I saved the stock tune file in the HP tuner software. I opened the "stock" file and low and behold the adapt page was identical to the "tuned" file, but those same adapts were disabled also. The only thing that was different was the "Max Positive Fill Time" was changed from 240ms to 300ms [Figure 4]. Now I had to look further, but where do I start with the many editable parameters that were available? 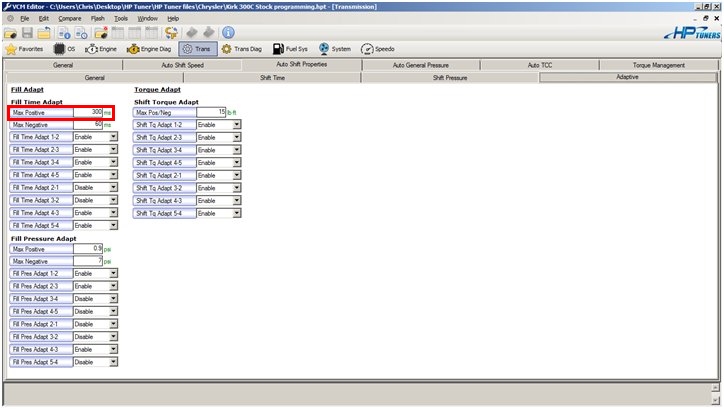 The HP Tuner software has another cool feature. It has a "Compare" function where when you have a tune file open and you can open another tune file for comparison. In this example, I had the stock file and the tuned file opened [Figure 5]. Everything that is shown in green are changes that the tuner made to the stock file. This narrows down the areas where you would need to look to see the changes that have been applied. Now I know where the issue lies, and what can be done to correct it. The only question left to answer was whether the customer would authorize the repair. My recommendation was to remove the tuner and rewrite the stock tune file with HP tuner software; just removing the tuner is not really an option at this point because of the modifications to the vehicle that were made. Unfortunately, the customer declined although I was confident that we could restore his performance needs and make the transmission shifts clean, but also get rid of the annoying downshift clunk. 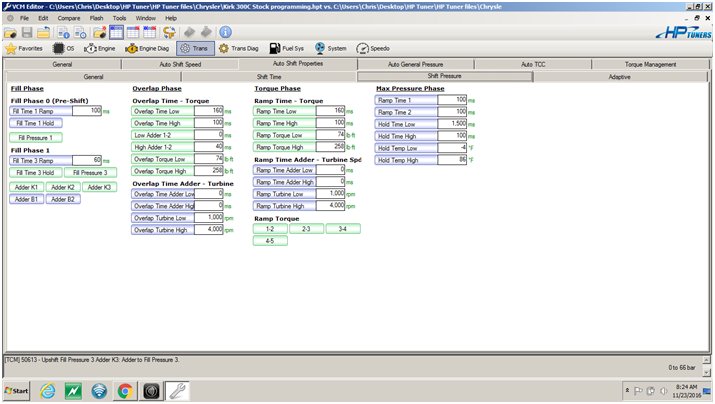 The customer wanted the ability to be able to change the tunes depending on the fuel to be used. This is something that I could not provide for him, but we might see him back again someday. For now he has decided to live with the downshift clunk. It was another good learning experience for me, though. I always welcome problems that are not the everyday things that we usually have to deal with. I do still have some unanswered questions with this one, such as why are the shift adapts for those particular ratio changes disabled? What would happen if I enabled them? Is it just that the fill time/pressure is determined from another shift change and not needed with those particular ones? I'm sure at some point I will see another chance to answer these questions reeling around in my head. Every day brings a new challenge.