Jody began his automotive career selling auto parts at a local parts store at the age of fifteen. He rebuilt his first transmission when he was sixteen. Joining Certified Transmission in 1986, and helped develop our first dyno department. He has held various technical positions throughout his career, including diagnostician and builder duties, as well as several retail store management positions. Jody's current role is working as a technical consultant for our warranty department, holding certifications from both ASE and ATRA. Outside of work, Jody enjoys life with his wife of 30+ years, Sarah, and is the father of two boys. His hobbies include rebuilding street rods, riding Harleys, hunting, and bowling.

We recently attended the EXPO in Vegas and like all others, you always meet up with other ATRA members wanting to talk shop. On this occasion I had the pleasure of meeting Dave Wilkes of Dave Wilkes Transmissions. We started talking shop (when we were actually supposed to be relaxing at the cocktail reception) but you know that?s never going to happen when one you bring up a problem with a vehicle that they recently had in the shop and like all technicians, I wanted to listen.

In this particular situation, Dave was working on a 2001 BMW 740i with a 5HP24 transmission. The vehicle originally came in with a complaint of leaking out of the front. The unit was very low on fluid, was slipping and the fluid was burnt. They recommended that the transmission be overhauled because of the above conditions and the mileage on the unit. Everything went normal with the rebuild and the customer left with a good working unit.

Three months and 4,000 miles later, the customer returned with the vehicle. The complaint was that under stop and go conditions the transmission would sometimes clunk and would downshift on its own for no apparent reason. After driving for 20-30 minutes, under the same stop and go conditions, the transmission would start shifting late through the gears. There was also oil on the back of the vehicle and it was smoking. On the initial inspection and road test the transmission appeared to perform normally, but he did notice the fluid level was about a quart low. When scanned, he found it had codes 049 (symptom gear check) and 034 (transmission sump oil temp high).

The codes were cleared and the vehicle was road tested again. The transmission would operate normally with the fluid temp around 100 degrees C (212 F), but the 049 gear check code would return and it would also go into failsafe. Knowing that the vehicle owner typically drove in stop and go traffic, it was decided that he needed to drive the vehicle under the same conditions.

With the vehicle back at the shop, an inspection on the rack revealed the transmission leaking from the front pump area. This would require the unit to be removed from the vehicle.

When the transmission and torque converter were inspected, there were no internal problems found. The valve body and solenoids were replaced based upon the 049 code.

With the transmission installed back into the vehicle, it was time for another road test. The transmission operated normally and no codes returned. It was now time to do some more stop and go driving.

When the transmission was removed, a thorough flushing of the cooler system was performed. The system in this car is very unique. It incorporates a transmission fluid heat exchanger (cooled by the radiator) through a series of hoses and a thermo check valve. 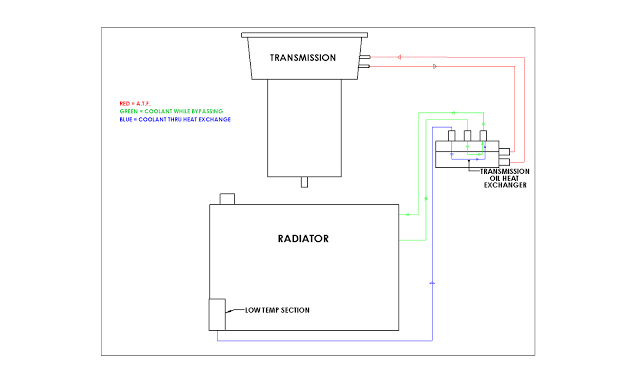 Now that we had a little better understanding of how the cooling system works, it was time to figure out why the transmission was getting this hot.

As stated previously, the transmission performed well and had good torque converter clutch application. We did not suspect it was causing the overheat condition. A cooler flow check was performed and it was flowing 4 quarts in 20 seconds. It was decided that the most probable cause would be the heat exchanger and or the thermo valve.

With the new heat exchanger and thermo valve installed, it was time for another road test and to our surprise this made no difference in the transmission operating temp. The new exchanger had a cooler flow rate of 2 quarts in 20 seconds which was more than adequate cooler flow. Now what?

There was only one component left in the system that could be the culprit. A new radiator was ordered. After replacing the radiator, there was a significant difference in the overall operating temp. Under normal driving conditions the trans temp was around 90 degrees C (194 F) and under repeated stop and go conditions the temp never got over 106 degrees C (223 F).