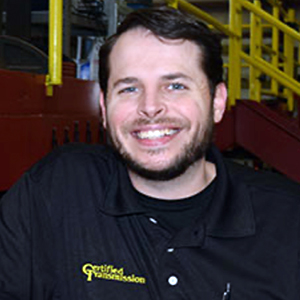 Brent has been in the auto industry for 8 years, 2 of those with Certified Transmission. He has been married for 9 years with three boys. He enjoys reading and sketching in his free time

Our customer came into our shop with a 2003 Chrysler PT Cruiser. The complaint described the engine dying and the check engine light coming on. At that time, the vehicle would always start back up. It finally got to a point where it would not restart, and was towed to the customer's home. On initial inspection we found codes P0888 (transmission relay always off), and P0562 (battery voltage low), and both of these codes were stored in the transmission side of the PCM. Knowing these codes don't usually cause the vehicle to die, I started with checking the battery/charging system. Both the battery and the alternator passed testing and had very little AC ripple to the system. After a quick visual inspection and checking fluids on the vehicle I decided to clear the codes and go for a test drive so I could duplicate the customers concern. The scan tool was still connected, so I set up a data list of what I wanted to look at during the road test.

At first everything seemed to be working as designed. No PIDs showed any voltage drop of any kind and the vehicle was operating normally and had not stalled for me. After approximately 15 minutes of driving, I came to a four way stop and the vehicle died. In addition to that my scan tool stopped communicating with the control module.

I restarted the vehicle, got out of the intersection, and found a safe place to stop and recheck my codes. The same codes had reset so I returned to the shop to determine why I was losing power. I started with the transmission control relay since that was the source of the code. I checked it for power and ground (which it had) and I also energized it to listen for the click, which it did, so I went ahead and swapped it with another relay in the hopes that it was possible that it stopped working once current had been flowing through it for a while. I also checked the 20 amp fuse in the #15 slot while I was there to cover my bases, and it was good. I expected a good fuse since I had power at the relay, but it's always good to get a visual confirmation for my own piece of mind. I went on another quick road test and the vehicle died at the very first stop, so my theory for an easy fix of a failing relay was wrong. Back to the shop I went for further testing.

I then decided to check for continuity on the wires that run between the PCM C4 (green) connector and the relay for any breaks. No opens were detected and the continuity was good. I did a wiggle test on the harness, trying to move it in a way that would recreate the momentum of stopping vehicle, and I had no change in continuity. I also checked the C4 connector for any corrosion or water damage and found none. I also decided to check pin fitment between the connector and the PCM while I was there, all pins seemed snug and hadn't receded into the connector. My next course of action was to monitor voltage from the transmission control module to the relay by back-probing the red wires at 19 and 28, which are the transmission control relay output wires on the green C4 connector.

I confirmed power at start up and I had a co-worker get in the vehicle to place it in gear while running. I again performed a wiggle test at the connector and tapped the transmission control module several times to attempt to get the vehicle to die, but with no luck. I then secured my leads, and using a meter with Bluetooth capabilities so I could monitor from my phone, went on another test-drive. At the third stop the vehicle died again and I was able to see that I completely lost power to the relay. I returned to the shop convinced that I needed a new control module. 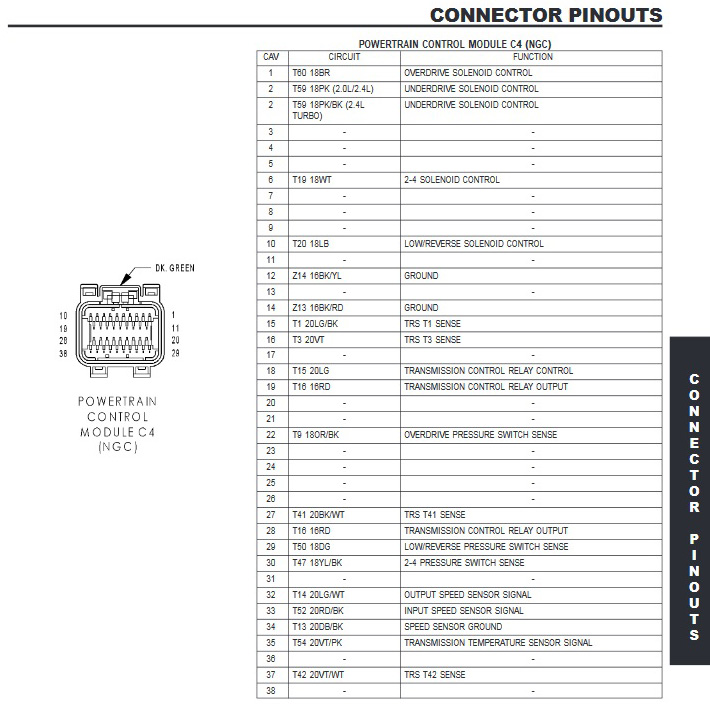 The PCM also supplies the power to turn on the relay from pin #18 on the C4 connector, so there were two ways I could go from here: use a scope to check to see if I lost power from the PCM at #18 a microsecond before I lost power at #19 & 28, or make sure I did not lose B+ to the PCM completely and since I lost communication at the same time, I decided to check power going to the control module.

I wanted to see if the whole unit was losing either power or ground, even though the DTCs only pointed to the transmission side. The B+ and ground for the unit was supplied through the C1 (black) connector. 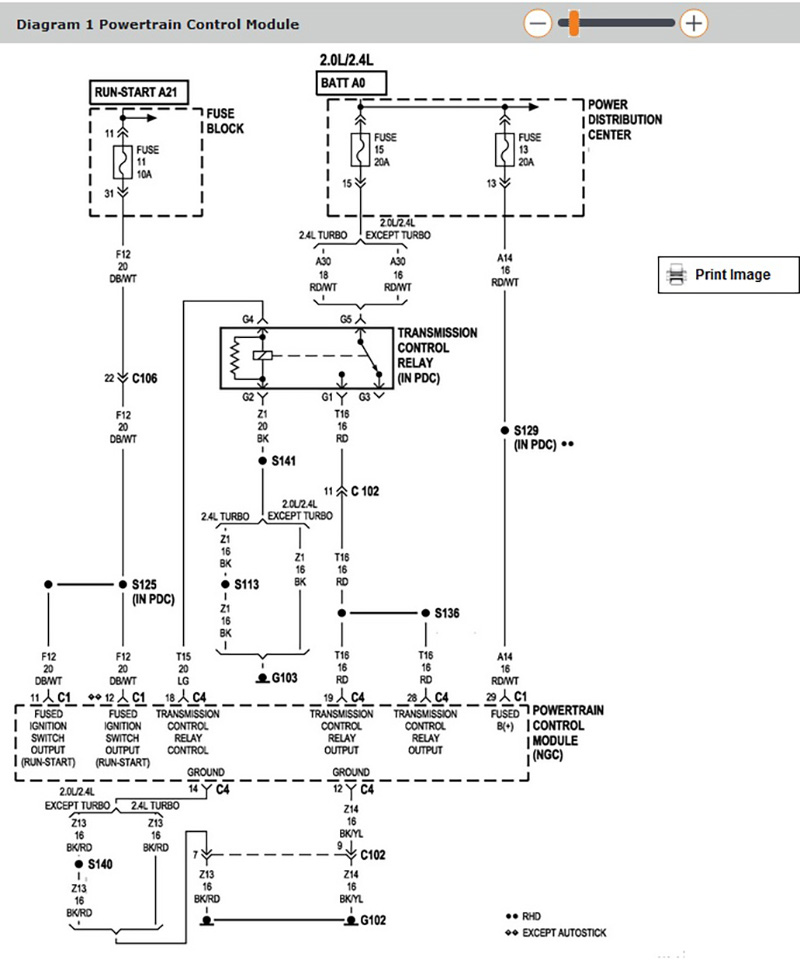 As I set up to back-probe B+ at pin 29, I felt the connector move quite a bit so I gently pulled at the connector and it came right off. Upon inspection I found the clip was broken. 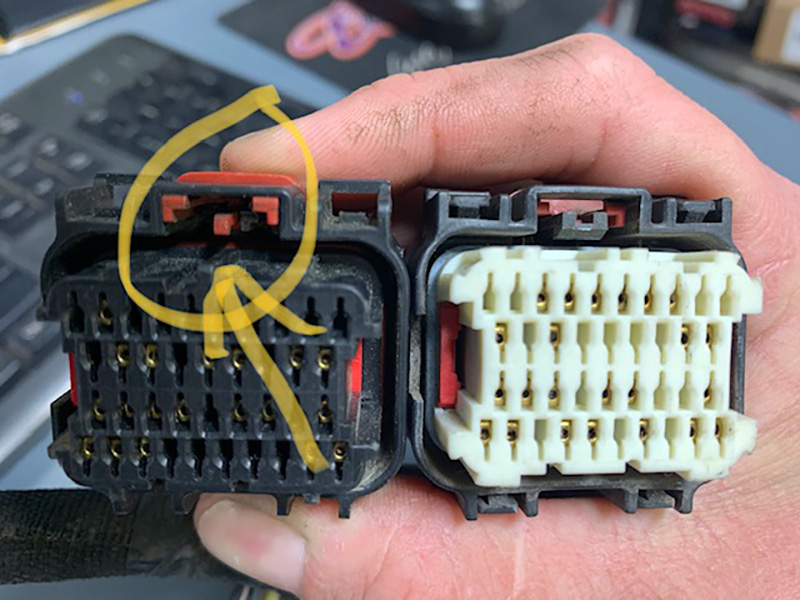 The connector end wasn't locking to the PCM. Now I knew why the vehicle was dying intermittently when coming to a stop. I located a harness end from the local salvage yard. I was able to pull the pins from the undamaged end of the used harness and swap out the damaged one on my customer's vehicle. I was careful to place all of the pins correctly and securely in the replacement end. Once I finished, I securely plugged the C1 connector into the control module. 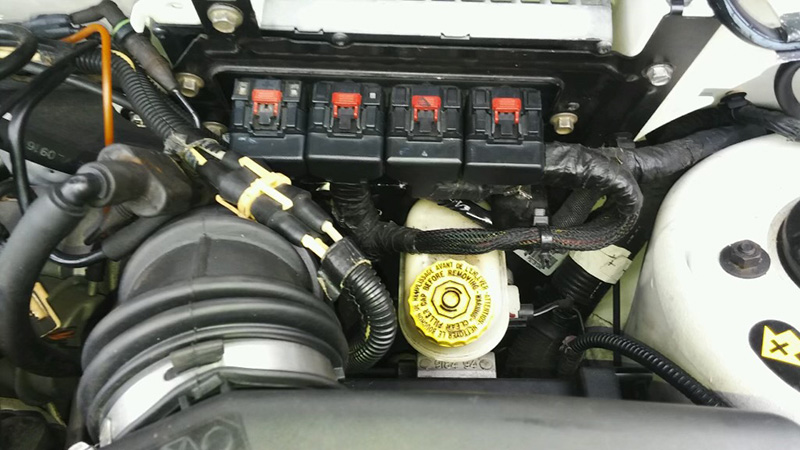 As a final check I once again back-probed the C4 connector transmission control relay wires and went for another drive. After 30 minutes of driving through neighborhoods and stopping at every stop sign I could, the vehicle didn't die and I never lost voltage. At this point I felt confident that that I had repaired the vehicle. The fact that transmission codes were the only codes present sent me on a little bit of a wild goose chase, but in the end, through due diligence, I was able to find the problem and perform the needed repair. I was glad I hadn't jumped to conclusions and went straight to just replacing the PCM, and the customer was happy to not have had to pay the extra cost of a new computer.