Remember To Update Those Tuners

We all know how important it is to make sure that the vehicles that come into your shop have the latest software loaded into the vehicle's computer systems. No matter the make or model, they almost all have some kind of updated calibration that the OE decided was important enough for them to get the calibration approved and released, whether it be for drivability, fuel mileage, durability or just a software bug.

I have been reprogramming automotive computers since 2006 and have seen hundreds of actual fixes from software updates, while others are more "behind the scenes". In those cases you might not really notice anything remarkable after the update, but this doesn't necessarily make them any less important than one in which you can actually see or feel a change in operation. While reprogramming ECUs is not the focus of this article, it's an important introduction to the prime subject: tuners!

Diesel tuners of the "programmer" or "downloader" variety where you actually plug into the vehicles OBD2 port and reprogram the ECM/PCM or TCM have some of the same issues that the OEM must deal with. Since most third-party calibrations are based on a factory, OE calibration, the modified version is susceptible to the same issues that can arise with the OE calibration, such as drivability, bugs, durability, or maybe power output that was not as advertised, etc. Any of these issues can result in an updated calibration from the tuner manufacturer. This is where it gets even more complicated, as the OE generally issues a TSB that alerts you that there is a re-flash available, or there is some kind of way to look up the calibration that is loaded in the vehicle and see if there is one more current.

In the aftermarket, this same information is not readily available and you won't know if there is a update to the tuner until you install the updating software and plug in the device. It will then compare the files loaded on the tuner to the most current files that are available from the tuner manufacturer and inform you if there is an update, or not. I will tell you that in my experience, most owners will install the tuner and forget it. If I had to put a number on it I would say that 85-90% of all the tuners I have checked for updates were NOT current.

All of the software to update the tuners is available free of charge to download and install. I have not come across one that there was a fee to do so. Doing this will accomplish a couple things: Firstly, you have assurance that all the software on the vehicle is current, and secondly, add additional revenue for the shop. We usually charge at least an hour at our diagnostic labor rate to load the tuner with the latest updates in addition to the actual charge for reprogramming. The only "hardware" you need is usually in the box with the tuner, and if not, the items are readily available as most are a USB to micro USB cable, a USB printer cable, or a micro SD card to USB adapter. These items cover just about every tuner out there.

It's always a good idea to refer to the instructions from the tuner manufacturer for specific procedures. A general rule of thumb that I follow is to uninstall the tuner from vehicle, reprogram the vehicle's ECM/TCM with the latest available OE calibration (whether you are using a factory tool or a J2534 interface), update the tuner, then reinstall the tuner back into the vehicle. The first step is very important to uninstall the tuner, as this will "unlock" or "un-marry" the tuner from the vehicle. Not doing so can lock the tuner to where it can't be reinstalled until unlocked again, and there is usually a charge from the manufacturer for this. Finally, hook up a line pressure gauge to the unit when you go for a test drive! A large majority of the tuner-related problems that I have seen involve improper line pressure, either too high, too low, or a slow response in line rise. These will create shifting issues and/or premature failure of the transmission, if not addressed.

I have included links where you can find the updating software to some of the more popular units:

Here is a real-life example of why this process is important. A 2009 Dodge Ram 2500 6.7L diesel with a 68RFE transmission came into one of our locations with some shifting issues. This was a modified truck with the EGR/DPF deleted (very common modification), bigger injectors and an H&S Mini Maxx tuner. This particular tuner has optional transmission tuning software that is available for an additional charge. Under the "settings menu", this truck had the transmission tuning displayed as "unlocked", so I knew that the tuner was in fact installed with this option.

I wanted to eliminate the tuner from the equation, so I uninstalled the tuner from the truck (when you do this the tuner will reinstall the calibration that it saved when the tuner was originally installed) and continued on with the evaluation. Uninstalling the tuner did not fix the problem, but I did notice something pretty strange with the data from the scan tool: 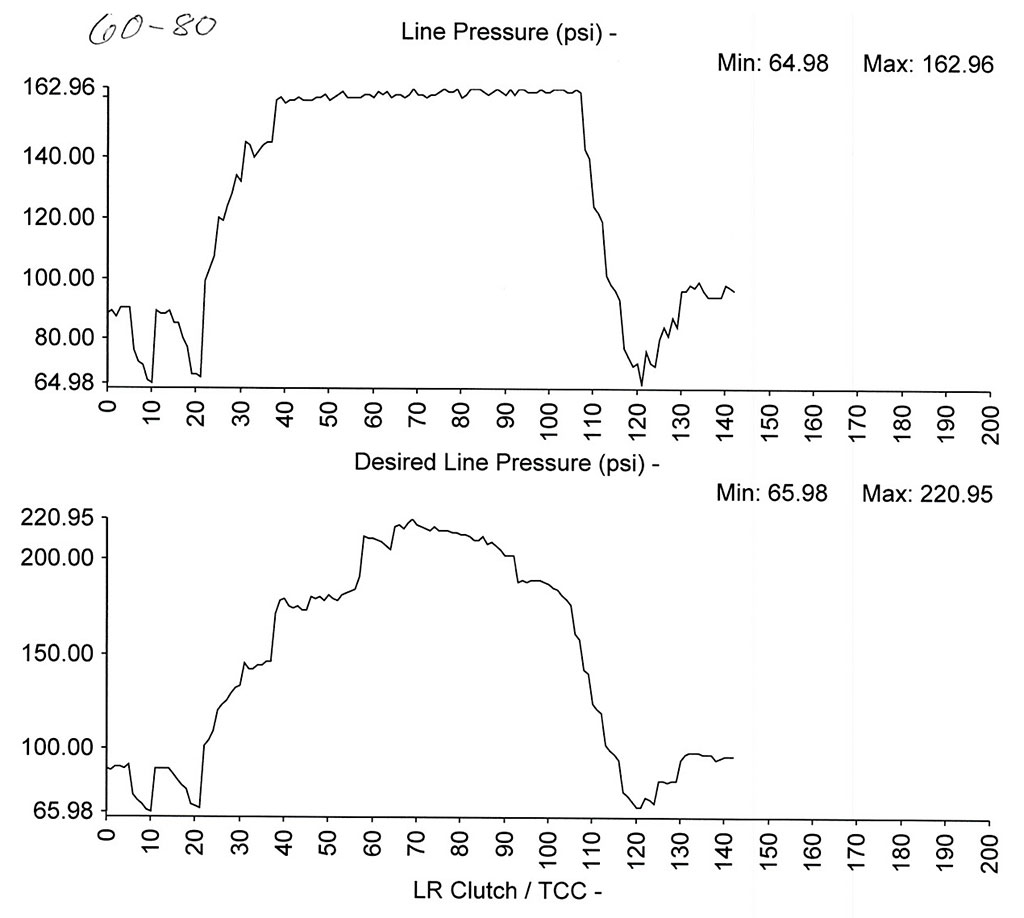 While under a load from 60-80 mph, the actual line pressure was correct but the desired line pressure goes as high as 220 psi. Since OE programming only commands a maximum of 160 psi in forward gears, the displayed desired 220 psi is obviously incorrect. I did verify with a pressure gauge that the actual sensor reading was correct and also tested with two different scan tools. The truck was not setting any low pressure codes, and uninstalling the tuner should have returned the vehicle to stock. What I was seeing did not match what I have seen in countless other trucks with the same drive-train, but why?

I went through the process of installing and uninstalling the tuner again with the same results, and looking on the Chrysler Tech Authority website I found a PDF file that you can download and save to search for calibration updates. The calibration in this truck showed as being current, so at this point I had no other choice but to force reprogramming with the same calibration number into the TCM (I say "force" because the system typically won't reprogram if it detects that the loaded calibration is current, as this was). I used the Chrysler WiTech scan tool to do this, and after using the factory tool to reprogram the TCM, you see the new results here:

You can see that the actual and the desired line pressure parameters now match each other. I concluded that using the tuner to "return vehicle to stock" did not reinstall the original calibration in its entirety and there was a residual effect on the factory line pressure table.

This particular tuner calibration had been updated multiple times, and one of the modifications they had done had altered the line pressure table. Here is a quote from H&S: Low Boost Fueling Option "This was added as an attempt to mock the feel of the old Pedal Response option that was omitted due to trans line pressure rise issues when we used that option." The subject truck ultimately had an OD clutch failure. Can I 100% prove that a tuner that was not updated caused the failure? Not really, but when an update is released to fix a line pressure rise problem I think it's a good possibility that had a negative effect.

In summary, it's always important to ensure that all of the update-able software is current on the vehicle, regardless if OE or aftermarket tuning is installed. Diesel owners commonly go for use of tuners in conjunction with engine component adds/deletes to get the maximum performance out of their trucks. The OEMs are wise to this practice and make it difficult for third-party tuners to alter some of the calibration parameters. Incorrect line rise is the prime killer for transmissions working under these conditions, so ensuring it's correct is in everyone's best interest.