We recently had a customer come into our shop with a 2005 Jeep Grand Cherokee. He was very frustrated because he had taken his Jeep to a couple of repair shops as well as a local dealership. The Jeep had a binding condition (described as "grinding" by the customer) in tight turns when it was cold.

At this point the shop decided to replace the transfer case shift motor and the FDCM (Final Drive Control Module). The vehicle appeared to be fixed as the customer had driven it for almost a month without any issues. Unfortunately, the concern reappeared, so the shop chose to service the rear differential and add the limited slip additive. This, too, was unsuccessful.

As one could guess, the customer was fed up and took his Jeep to his dealer for repair. The story then takes an interesting turn: the dealer diagnosed the vehicle and advised the customer that the issue is a normal condition, and there is no known fix to correct it. The customer, now beside himself, refused to accept that answer as he just wants his vehicle to work like it did when it was new. He left the dealership with his broken Jeep, angry that they couldn't fix it.

As he was describing his nightmare to a friend that happened to be a customer of ours, his friend suggested that he bring it to our shop for diagnosis. After he told us his story, we were a little concerned that we may not be able to resolve his situation. However, we like a good challenge and readily agreed to see what we could find out for him.

After a road test with the customer, the Jeep had already been driven enough to warm the transfer case to the point that the problem was barely evident. I could feel a little something odd in the driveline, but he stated it was much worse when cold. We had the customer drop off the Jeep and leave it with us overnight so we could re-evaluate the issue when it was cold.

The following morning, I road tested the Jeep when cold and felt a bind-up condition coupled with a growling noise on tight turns. There was no way that this was a "normal" condition, and it felt like a transfer case that either had a viscous coupling issue, or clutches that were seized up. While not impossible, the transfer case itself was ruled out since it had been twice replaced with no positive results.

A quick scan of the electronic network revealed no codes in any module on the Jeep. After checking all the typical causes such as tire size, tire pressure, and wheel speed sensor readings (which were all normal), I discovered that there are two different options for a 4wd system on this vehicle: Quadra-Trac, and Quadra-Drive.

The Quadra-Drive system uses what Jeep refers to as ELSD (Electronic Limited Slip Differential) on both the rear and the front differentials. I was not familiar with this setup as I have never had one in our shop with a problem before. Looking over the repair information, there didn't appear to be much information available in regard to diagnostics for a "no code" complaint. Even Chrysler's "Tech Authority" website seemed to be lacking diagnostic information for this system. With little support, I looked up some diagrams, found some specs, and then started off on my quest to locate the root of the problem.

I raised the Jeep on a lift so I could have all four tires off the ground, checked all of the fluids, and did a visual inspection in which everything seemed to be in order. With the vehicle not running and the ignition in the off position, I turned both of the front tires in the same direction by hand, and observed that the front driveshaft spins up to the transfer case with no output to the rear driveshaft. I repeated this at the rear, and determined that both the front and rear tires could be turned individually without affecting the other end.

I then started the engine while the transmission was in neutral and had the same result. I engaged the 4-Low lever on the shifter console, low range engaged and I was unable to operate the front or rear independently of each other, which Is what I expected to happen if the transfer case was operating properly. At this point I was fairly confident that the issue did not involve the transfer case or its control system.

While it was still running in neutral on the lift I attempted to rotate the rear tires in opposite directions, and while there was some resistance from the clutches, it did not seem abnormal. I then went to the front and attempted the same thing, and it was almost impossible for me to rotate the tires in opposite directions. The problem appeared to be the front differential, but what was causing this?

Still being concerned with some kind of control issue, I shut off the engine and unplugged the actuator solenoid connector on top of the front differential (Figure 1), and again attempted to rotate the tires in opposite directions, to no avail. It would not budge. At this point I suspected a mechanical failure in the front differential, so an inspection was in order. 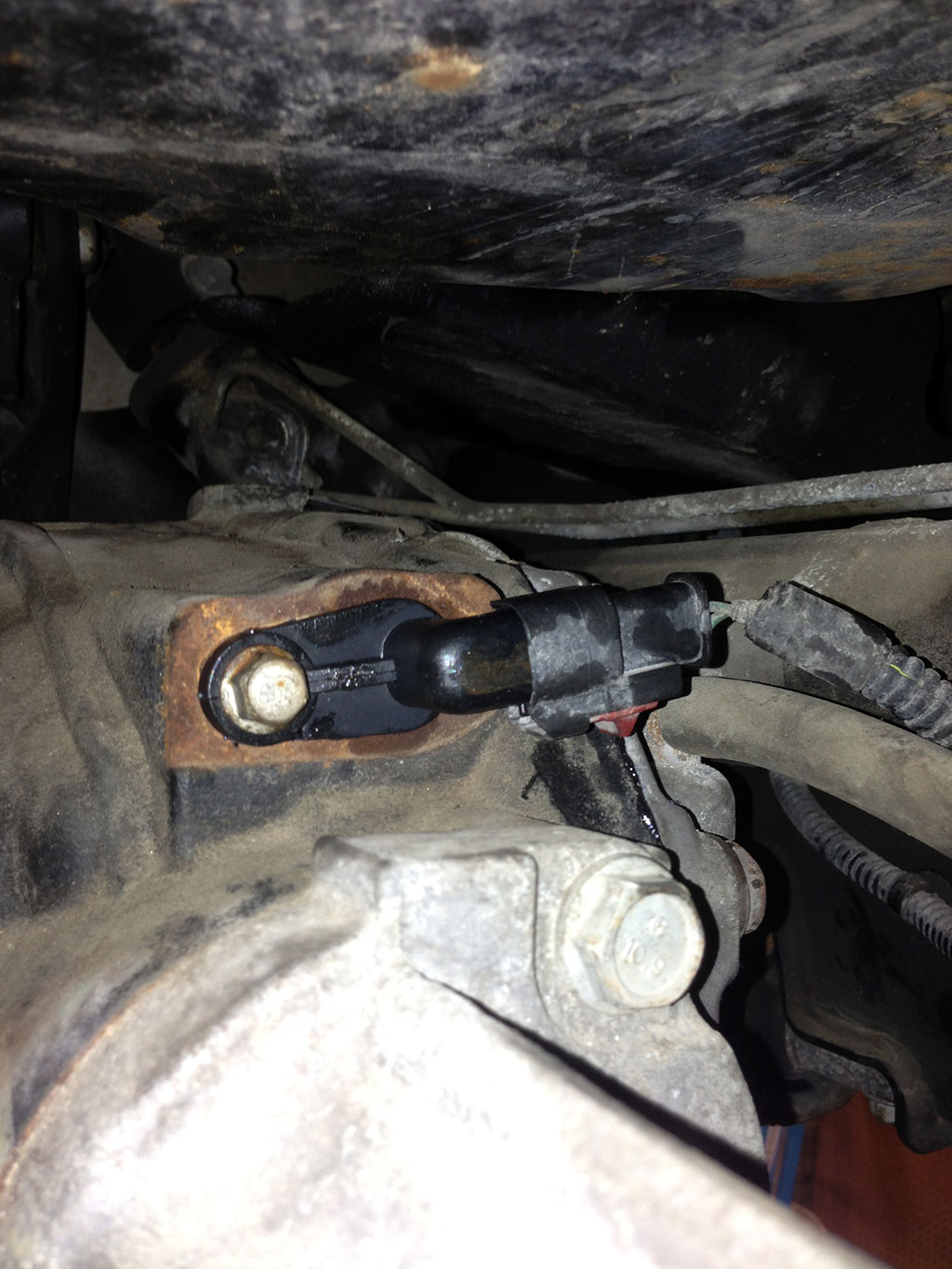 I was able to remove the inspection cover without complete removal of the axle. Once removed, I could see that the actuator solenoid had a clip that must be squeezed together, allowing removal of the solenoid (circled, Figure 2). After its removal, I again tried to rotate the tires in opposite directions, and did so with ease. This proved that the cause was not mechanical, but rather a hydraulic or mechanical problem with the solenoid. 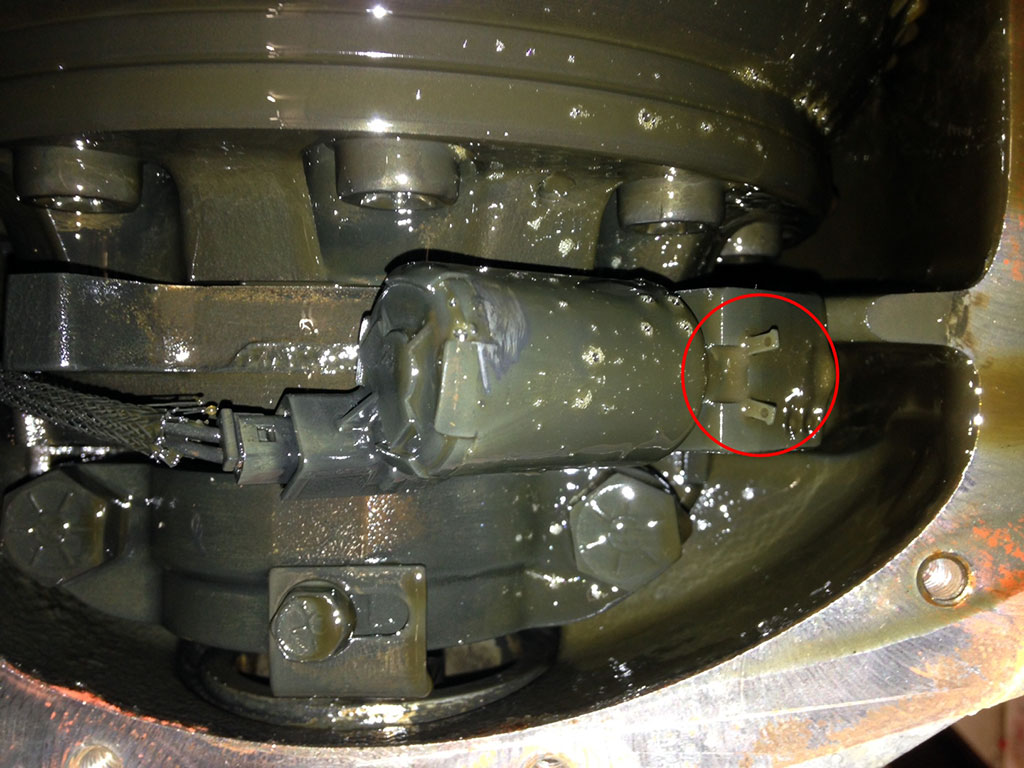 I tried to blow through the snout of the solenoid (not recommended, yuck), and air would not pass through. Since information was limited for this system, I really did not know if it was a N.O. (normally open) or N.C. (normally closed) solenoid, so I ordered a new solenoid to test (Figure 3). Sure enough, I could blow through the new one while disconnected, indicating that this was a N.O. solenoid. 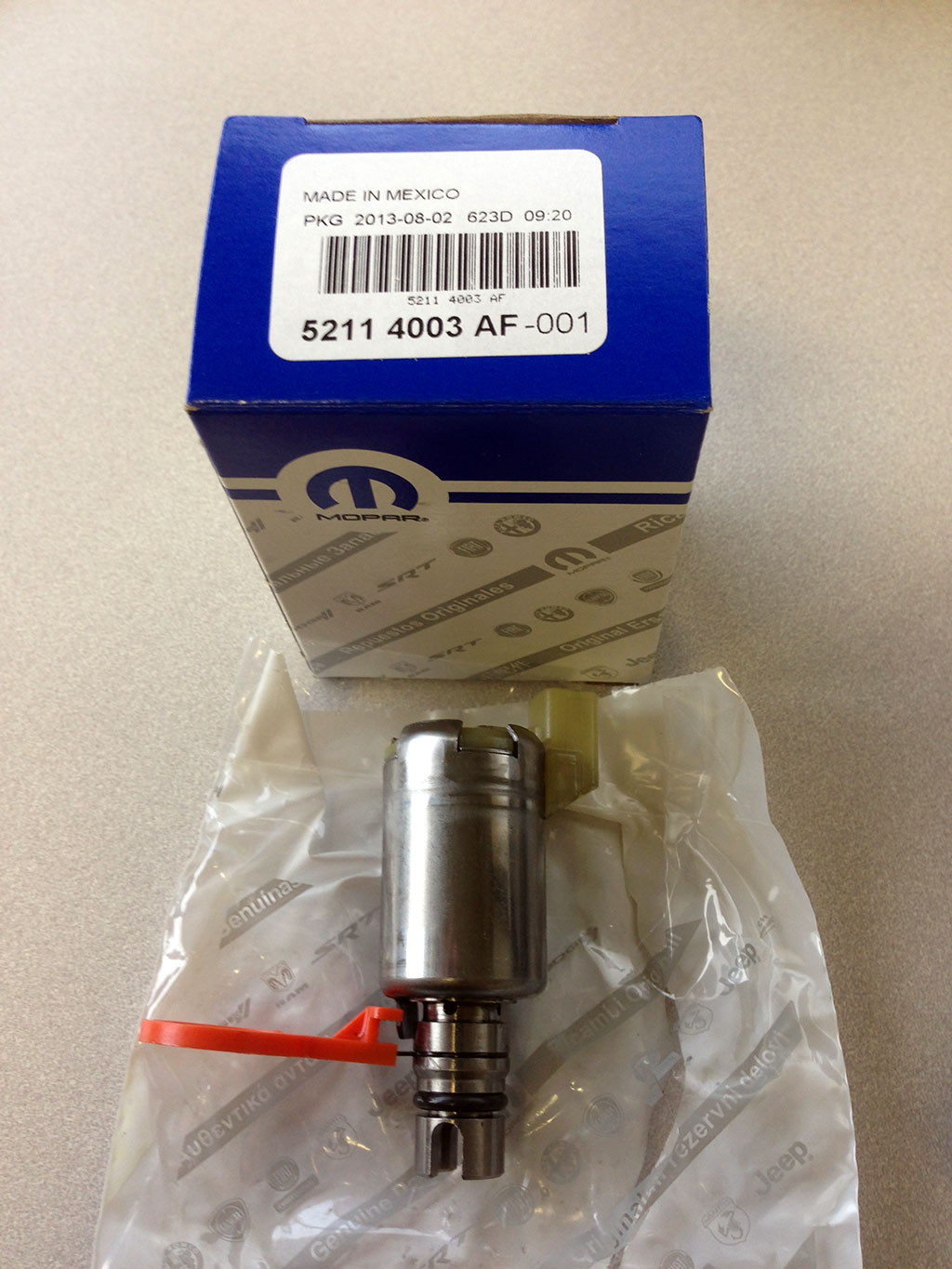 After replacement (Figure 4), the Jeep worked like new again and the customer was extremely happy. 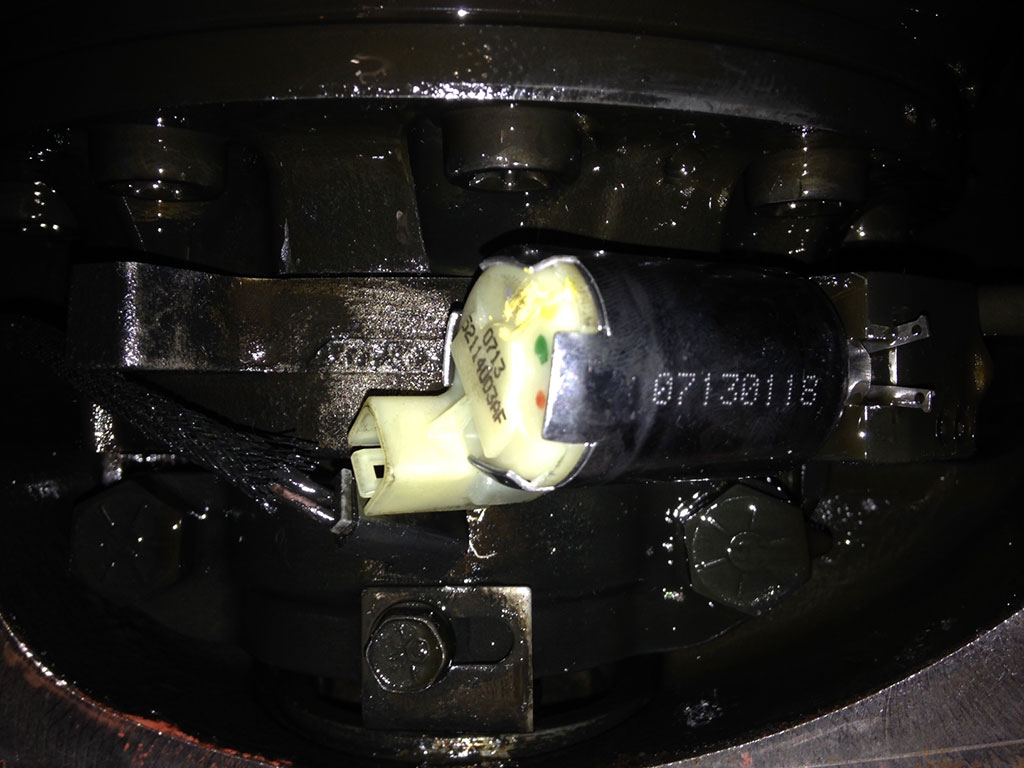 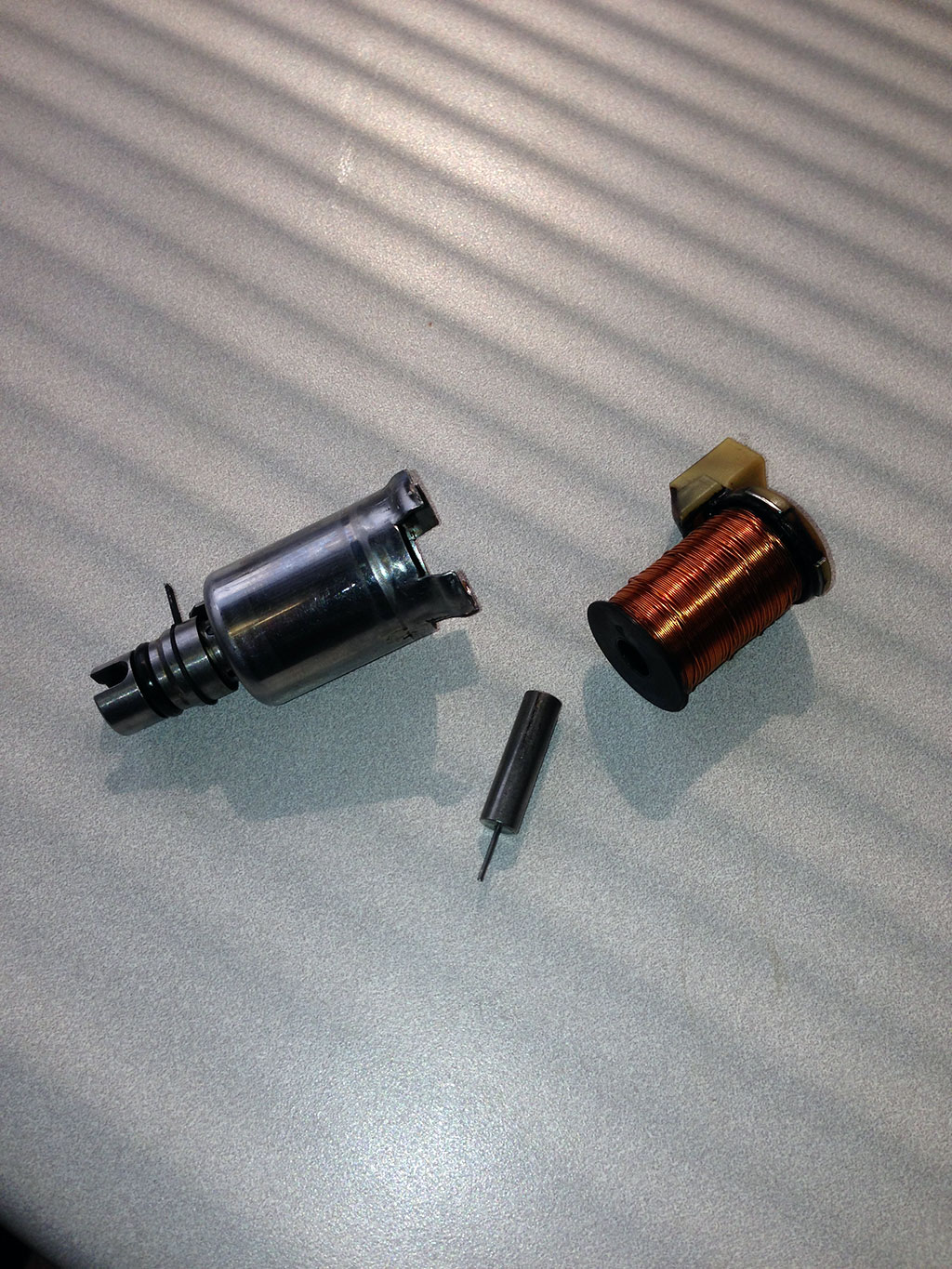