Recently our shop had a 2008 Honda Civic equipped with a 5-speed manual transmission come into the shop with an unusual customer complaint: the customer stated that the RPMs flared after shifting fairly quickly. Our first thought was that maybe the clutch was getting weak and not holding well after an aggressive shift.

On the initial road test and under normal driving conditions, the car seemed to be working fine. However, when the car was driven a little more aggressively, the customer's concern became apparent. If you released the clutch pedal quickly, the pressure plate seemed to react slowly. Upon further inspection, it was noted that when the vehicle was stationary with the engine off, and the clutch pedal was partially depressed, it would take some time for the clutch pedal to rise back up to the pedal stop.

At this point we needed to narrow down where the problem was originating from, so we unbolted the slave cylinder from the transmission case and manually stroked the clutch throw-out fork. There was no drag felt in the system when this test was performed, so it was determined that the problem was outside of the transmission, and more than likely somewhere in the hydraulic system.

Neither the master cylinder nor the slave cylinder showed any signs of leakage, but the hydraulic fluid in the system looked strange to me; slightly cloudy indicating that there was moisture or some contaminate in the system.

Since the vehicle was just purchased by the owner, we had no knowledge of the past repair history of the car. Since I was having concerns about what may have possibly contaminated the hydraulic system, I recommended that we replace both the master and slave cylinder and flush out the system with new fluid. Unfortunately, after those repairs were completed, the customer's concern was still present.

Searching for additional clues, I noted that this car utilizes a flexible line on it, identical to a brake hose. I have been in the transmission business exclusively since I got out of trade school, but I still remembered learning then that the rubber brake lines would sometimes have issues creating a check-valve effect inside the hose. With this idea in mind, I removed the hose from the car and tried to blow through it. It seemed restricted, but without being able to see inside the hose it was necessary to cut it open to confirm the restriction. 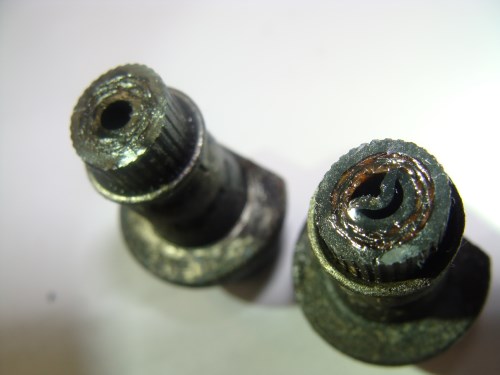 It's clearly evident in the photo that the inner lining of the hose was swelled up and partially collapsed, likely due to the aforementioned fluid contamination. While this condition did not seem to affect the operation when applying pressure to the slave cylinder, it could not flow as intended when it needed to release and transfer fluid back up into the master cylinder reservoir.

This is basically the first time I have seen this condition on a hydraulic hose for the clutch system, though it is very common on brake systems. Because both systems operate under the same principles and use same types of fluid, I am certain we will see more of them.

For future clutch maintenance, it would be a good idea to replace these flexible hoses whenever the master and/or slave cylinders need serviced. It would certainly prevent an unwanted comeback, and ensure that your customer has peace-of-mind when they leave your shop.