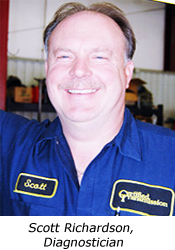 A few weeks ago, Mrs. Miller came in with what she had been told was a transmission concern. She had taken her vehicle to several other places, including the dealer, before bringing it to us. She was very concerned since her after market warranty was only 5 miles away from running out. She stated that her 1999 Dodge Caravan wasn't shifting properly and her transmission range indicator on the dash had a malfunction, and not even the Dodge dealership could find the problem. After performing our Certi-Care Evaluation, which includes test driving the vehicle, scanning for service codes, and performing a visual inspection, I was unable to find anything wrong. There were no codes, shift points were good, fluid was in good condition, and the range indicator was working properly. Since Mrs. Miller was waiting at this time, I asked if she could leave it with us for a little while to see if we could duplicate her concern. She was unable to at that moment but set an appointment to bring the Caravan back a couple of days later for us to perform Level-1 Electrical Diagnoses, which is beyond our Certi-Care Evaluation.

This time when I started the vehicle I noticed that the digital range indicator didn't circle the park or neutral ranges, all the other ranges were ok. I pulled the van in the shop and when I shifted the lever from drive to park, the drive range stayed circled for a few seconds then all the indicators circled. Well, my first thought was obviously there is a transmission range sensor (TRS) malfunction. I took the van for a short road test and sure enough, the transmission was in failsafe mode, 2nd gear only. Now I was able to verify both of the customer's complaints, but when I pulled the van back into the shop the range indicator started working properly again. I thought it was possible the transmission control module (TCM) would have stored a code since the transmission went into failsafe mode but to my surprise there were no codes stored. I tried the rest of the day, off and on between other appointments to get this intermittent problem to stay consistent long enough to get it figured out, unfortunately I was not able to. Mrs. Miller needed the van back for the weekend because it was the only vehicle she could fit 7 children in, and our rental car was already out. So we scheduled another appointment for Monday.

When Mrs. Miller brought the vehicle back to our shop it sat outside long enough to cool off before I was able to look at it again. When I started the van the TRS was malfunctioning again, so instead of pulling it in the shop I grabbed the scanner and plugged it in. I wanted to see what range it showed to see if the malfunction was just the indicator, or a problem with the range sensor but the Scanner had no communication. I hooked up the Battery/Alternator tester and the electrical/charging system were both normal. Now I'm thinking maybe it's an internal problem with the range sensor, or wiring is shorting to ground between the TRS and the TCM, causing the TCM to power down. I went to Alldata.com and pulled up wiring diagram's for the TRS. Next I ohm tested all wiring circuits between the TCM and TRS, 6 circuits to the TCM and 1 to the power train control module (PCM), no problem found. I plugged all the connector's back together and hooked the battery back up, and turned the key on to see if the TCM would power back up, and it did. I cleared the code for having the battery disconnected then started the vehicle with the scanner still hooked up. After starting the vehicle the Scanner lost communication with the TCM, still in park, I hadn't touched the shift lever or stepped on the brake pedal.

So now the TCM was working before I started the van, after starting the TCM lost communication or powered down. My next step was to go back to the TCM and check all power and ground circuits, again no problem found. All ground's were 0.1 ohm's or less, so I decided to monitor the power circuits at the TCM, pin 56 battery voltage, pin 11 fused ignition, and pin 8, also fused ignition. What I found was pin 56 and pin 11 remained constant whether the TCM was communicating or not. Pin 8 was intermittent. If there wasn't power the TCM powered up, when there was power the TCM didn't power up. In the wiring diagram pin 8 shows ignition so I assumed it would have power when the key was on and when running. Next I went to the ignition switch diagram, according to the schematic, pin 8 goes from the TCM back to a 10 amp fuse #10 under the dash, ( circuit F45 ) then it goes form the fuse #10 back to the ignition switch pin 10, ( circuit A41 ). The schematic shows that this circuit only has power when cranking. At first I thought this had to be a miss print so I decided to cut the wire at pin 8 about 6" away form the TCM, ( so I would have enough room to solder the wire back together later ) and go drive the vehicle and see if the TCM stays on. I drove the van three times, about 12 miles total and cycled the ignition key several times before and after each road test with no problems at all.

Still a little puzzled over the schematic issue of this circuit A41 before the fuse and F45 after the fuse, (pin 8) at the TCM turning the computer off when voltage was present. According to the schematic, if voltage is present after starting at pin 10 at the ignition switch, then the ignition switch has an internal short to power. I called several people I know at dealerships and general repair shops and know one had seen this problem before. Then I called Joe Hurley who is the diagnostician at our Independence location. Tranny Joe, as we call him has been with Certified Transmission almost 16 years and every shop in the area calls him for technical advice. After I explained to him what I had found I ask him if he knew why Chrysler ran voltage to the TCM when cranking. I was shocked when he said "yes I do" he also said he had run into that very same problem some time ago. He said after talking to several Dodge and Chrysler dealership technician's he couldn't get a straight answer from any one, he finally got a hold of a Chrysler electrical engineer who told him that circuit was used to turn off the TCM during cranking to keep the TCM from setting solenoid code's, I would guess due to the voltage drop while cranking. Now it all made since, so If you have an intermittent no communication issue after starting, or the customer complains of an erratic range indicator and the transmission not shifting, after checking battery and alternator condition and operation, check to see you have battery voltage at pin 56 and ignition voltage at pin 11 at the TCM, if so check for ignition voltage after starting at pin 8, if you find voltage there you've found the problem, a short to power most likely a bad ignition switch. You will still need to check the ignition switch unplugged in the run position for continuity between pin 7-C1 battery and pin 10-C1 circuit A41. If you have continuity you have an internally shorted ignition switch, if not it could be a dead TCM. After we replaced the bad ignition switch, I test drove the vehicle and no more problems were found. We did follow up with Mrs. Miller a few days later and she could not stop thanking us for doing such a great job and told us she would tell everyone about Certified Transmission. Like my Grandfather Lucas used to say, "If you don't learn something every day, your not paying attention."