Incompatible Programming Must Be Addressed When Installing Used Components

We had a local general repair shop bring us a 2014 Jeep Grand Cherokee 3.6L V-6 engine equipped with a ZF 8 Speed (845RE) transmission; they had just installed a "rebuilt" transmission that was sourced from a salvage yard. The customer?s stated concern was, "The place that built the transmission just said it needed to be programmed." Needless to say, we knew that this was going to be an adventure.

When we began our evaluation, we found that there were a bunch of 'U' codes for invalid data received from the TCM, but we did not get that far into it since the customer was adamant that they just wanted it programmed and did not want us to do any kind of diagnostic. After all, it was a "rebuilt" transmission, so what could possibly be wrong? I wish I knew how to convey sarcasm in the written word; I can do it in person pretty well.

We do a lot of programming in our shops and we have equipment and software to cover almost all automobile manufacturers in-house, with the exception of a few higher-end European vehicles that we do not see on a daily basis. Each of our locations has a laptop that is specifically setup for programming plus a J2534 device, but we also have a variety of OE tools also. For this vehicle I grabbed the Witech tool and proceeded to go through the reprogramming process. There was an updated calibration available so I went ahead and flashed the TCM to the updated part number of 68234057AA, and everything went fine. Programming completed with no errors or warnings, or so I thought.

After programming, I always go back and clear codes from all modules and also look at the reports that WiTech will generate, but specifically the ECU data. This is where I saw some discrepancies. Figure 1 is the TCM data, and it is here that you can see that the current VIN and original VIN do not match. The one that ends in 2111 is the correct VIN for the vehicle.

Needing to know what this transmission came out of was my next step. Running a VIN decoder (Figure 2) showed that this unit was pulled from a 2015 RAM 1500 with a 5.7L engine. 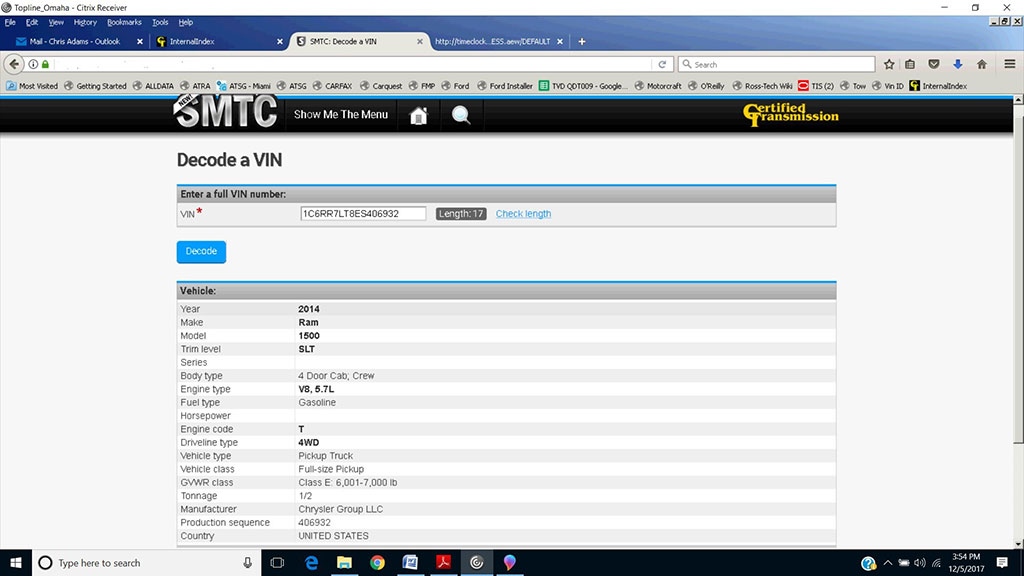 What? Dealing with the 8 speeds is fairly new to us and we have not seen that many in our shops, but I was pretty certain that an 8HP70 that was behind a 5.7L V8 would not work properly in the place of a 845RE mated to a 3.6L V6. To try to make a long story short, the used, er...whoops, "REBUILT" transmission did have some work done to it, but they either installed a complete valve body or at least the TCM from another vehicle. While it is possible in certain circumstances that a used TCM can safely be installed in another vehicle, the calibration or ECU part number has to be for that same vehicle as neither the OE WiTech tool nor the J2534 programming software will allow you to change the calibration number or the VIN in the TCM. It will always have a current/original VIN mismatch when looking at ECU data, but when this is only in the TCM, it does not seem to set a code or cause any other issues (I must say that this is from very limited data, and might not be true in later model vehicles 16 & up; this example was a 2014 MY vehicle). Bottom line is that this would never work as-is.

The second part of this story starts after we installed a NEW complete valve body from FCA into this Jeep to make things match. Our WiTech was not available so I used the J2534 tool to program the new TCM. Here is where I want to direct your attention, because if you are not paying attention this is where you could get into some trouble. You probably can?t read the writing in red on that screenshot, so what it says in Figure 3 is this:

NOTICE: There is more than one flash to select from for this ECU. Ensure that you have selected the correct one in the drop down box before you initiate the flash. Note that the contents of the Service Bulletins table change according to the flash selected. 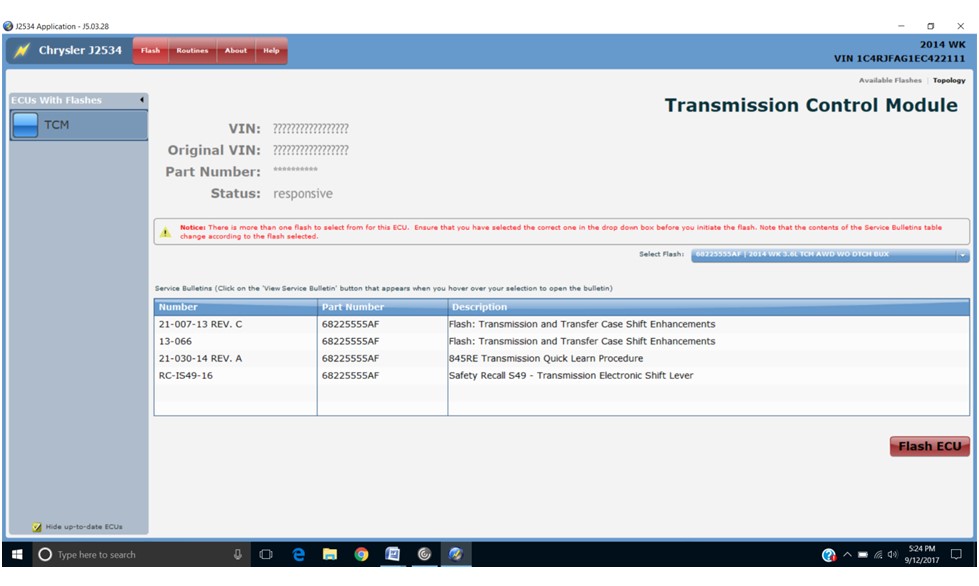 The "FLASH ECU" button can be pushed, but the 68225555AF calibration that is listed is NOT correct for this vehicle! You must select the correct file from the drop-down box, and the correct Cal file is shown in Figure 4 of 68225561AG in the topology view.

In the next set of images you will see screens that you would encounter during the programming process. Make sure you get all the way to "Flash Complete", and the "OK" button is highlighted. 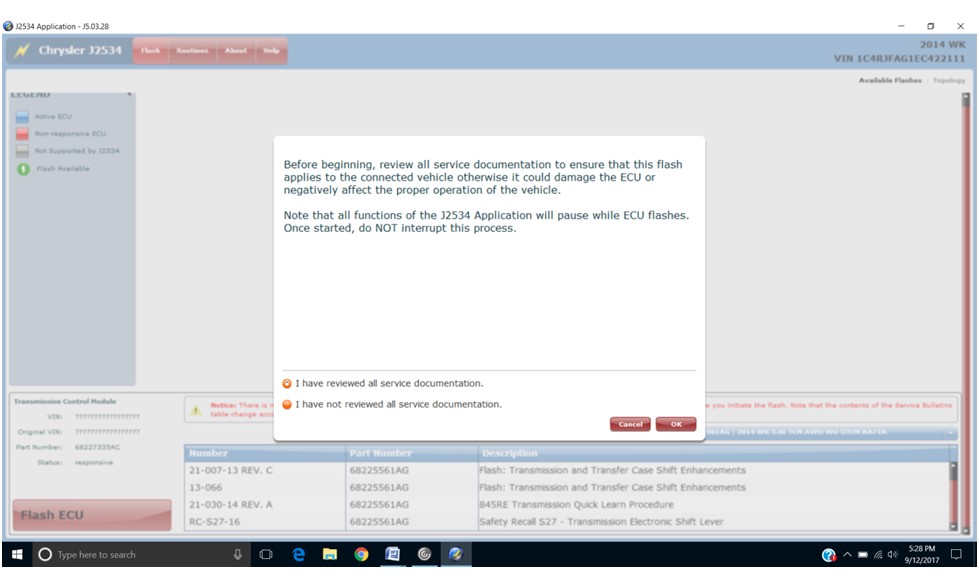 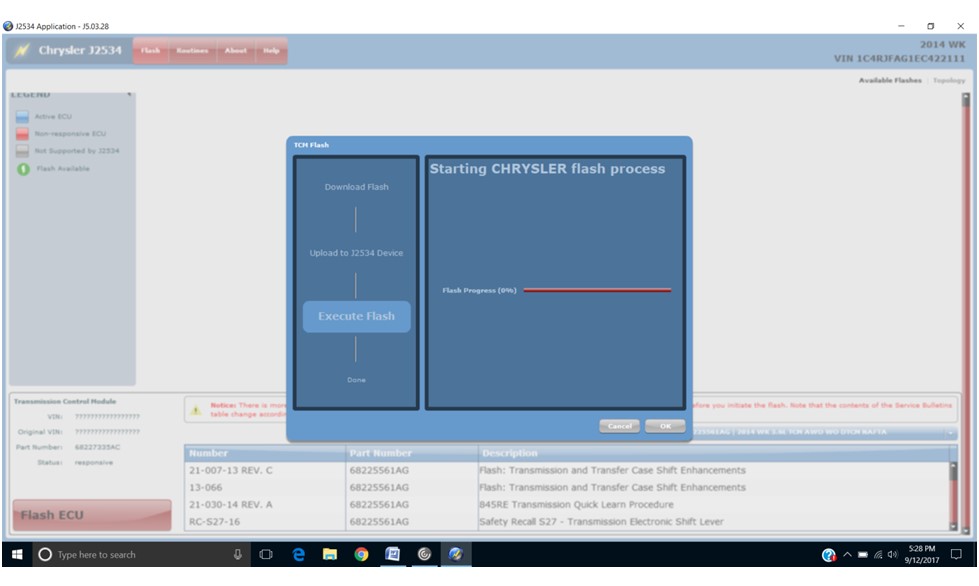 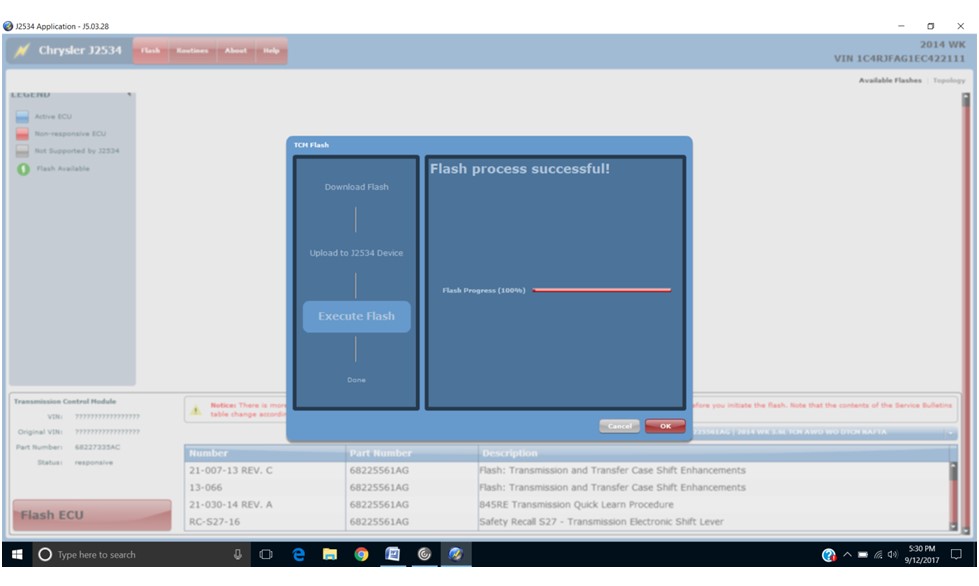 After you get done programming, as you see in Figure 9, the "FLASH ECU" button is still there.

Even after programming it takes a bit of time before that goes away. The VIN and the correct calibration are shown above it, but before programming the VIN was all question marks and asterisks in the part number line. When I clicked the topology view in Figure 10, the "Flash" button went away and the TCM displayed as "Current". 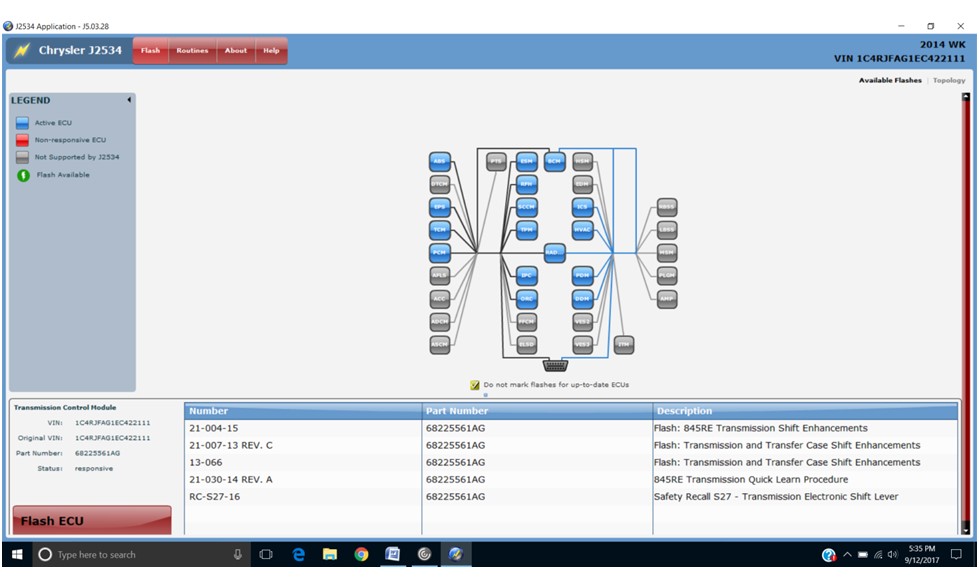 I do want to add that this process is specific to the J2534 programming process; if you are using the OE WiTech tool, it will pull the correct calibration file by the VIN, and with the blank TCM part number, you will only have the one option. We can only hope that the aftermarket software can start working more like the OE software does as time goes forward, but for now we need to work cautiously when dealing with the 8, 9 and 10 speeds that will be coming in our doors.

You can look up the correct calibrations on the Tech Authority Website without a subscription, but you have to know where to look.

At the bottom of the TA homepage there is a link called "Related documents and links". If you click on that, it will show several other links that you can get to without a charge, and one of them is the "Flash availability" PDF file.

It will be challenging in the coming years dealing with used components that have vehicle-specific programming within the modules inside of them. Since the salvage industry uses part numbering standards such as "Hollander", it lumps incompatible software with compatible hardware. We must always ask questions about the origins of these components as that will help us determine how we can proceed to solve the customer's vehicle problems.