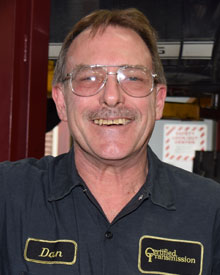 Dan has been in the automotive industry for over thirty years and is an ASE Certified Master Technician. Dan has a college background in electronics engineering and specializes in diagnostics and computer controls for Certified Transmission.

The subject of this article is a 2006 Hyundai Sonata that came into our shop with a no-shift complaint. It was likely in limp-in mode, so in order to get down to the cause of the problem I began with a cursory preliminary inspection.

My initial inspection revealed several obvious issues: the MIL didn't self-check, no communication with the PCM/TCM unit, airbag light on, and an oddly flashing cruise lamp. A short road-test confirmed the no-shift condition. After getting some diagnostic time approved from the customer, I began my in-depth diagnosis.

Whenever I'm faced with a communication issue, usually the first place I go is verifying power, ground, input and output to the offending modules. A good place to start is checking communication lines at the DLC and checking fuses. And I mean ALL of the fuses. Not that I've ever had a "D'oh!" moment after 30 minutes of checking things, but it happens to the best of us. I quickly found a blown fuse that was labeled B/U lamps. Replacing it blew the new fuse immediately, so I knew I needed to look there first.

Looking at a power distribution diagram showed that fuse powering the B/U lamp circuit also powers what Hyundai calls pulse generators'A' and'B', or more commonly known as transmission input and output speed sensors. In addition, the transaxle range switch and the vehicle speed sensor are also powered through this fuse. All of these components are easily accessible on the top of the transmission, and it didn't take long to find the connector to the pulse generator melted: 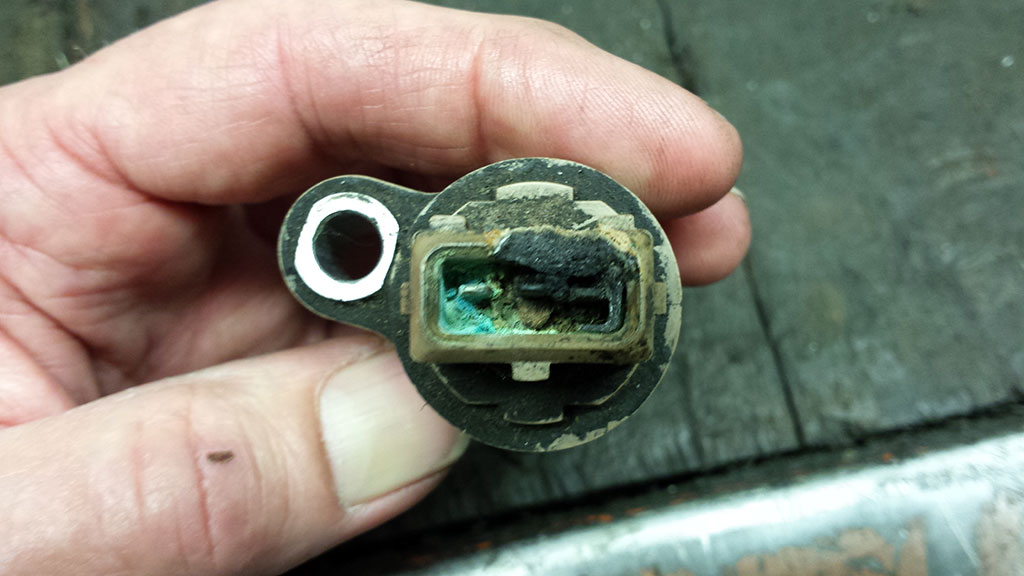 The pulse generator sensor is a hall-effect sensor with a power and ground, and the output feeds the K-line, or low speed communication circuit.

Here's where the fun began. The vehicle speed sensor on the transmission doesn't supply vehicle speed data directly to the PCM. It sends data via the K-line to the BCM, TPMS, ABS, and traction control modules. Vehicle speed input to the PCM comes from the RF wheel speed sensor, which is basically an ABS sensor, even though the vehicle doesn't have ABS. This is a rather odd, but common, setup on Hyundai/Kia vehicles. Side note: if you run across one that has an erratic wheel speed sensor signal due to a cracked tone ring, the rings are available separately from the dealer, are very inexpensive and usually on the shelf.

The K-line also supplies scan tool communication. When the sensor and connector melted in this case, it grounded the K-line circuit and therefore, no communication. Once I snipped the connector off, communication was restored and I was able to scan for codes. The only code that showed up was a P0700, general transmission fault. I didn't have a code for the pulse generator because it wasn't an input to the PCM/TCM. I still didn't have any communication with the TCM, nor did I have a check engine light or a code for the MIL circuit. Time to dig a little deeper into the problem.

One thing I like about Hyundai/Kia vehicles is that for the most part, they're pretty easy to work on. Also, their electronics seem to be pretty reliable, as is the case with most of their Asian counterparts. They don't seem to have very many intermittent issues like some domestic manufacturers (think TIPM!) and their components are usually either dead or alive.

The PCM/TCM units on this model are next to the air cleaner with the connectors facing up, which makes back-probing circuits a breeze. In about 5 minutes I had the instrument cluster out and knee bolster removed in order to provide access to the fuse/central junction block. I now had easy access to test just about any circuit on the vehicle. With the cluster out, it didn't take long to diagnose the cause of the MIL issue; you can't light up what isn't there. The socket and bulb was missing from the back of the cluster: 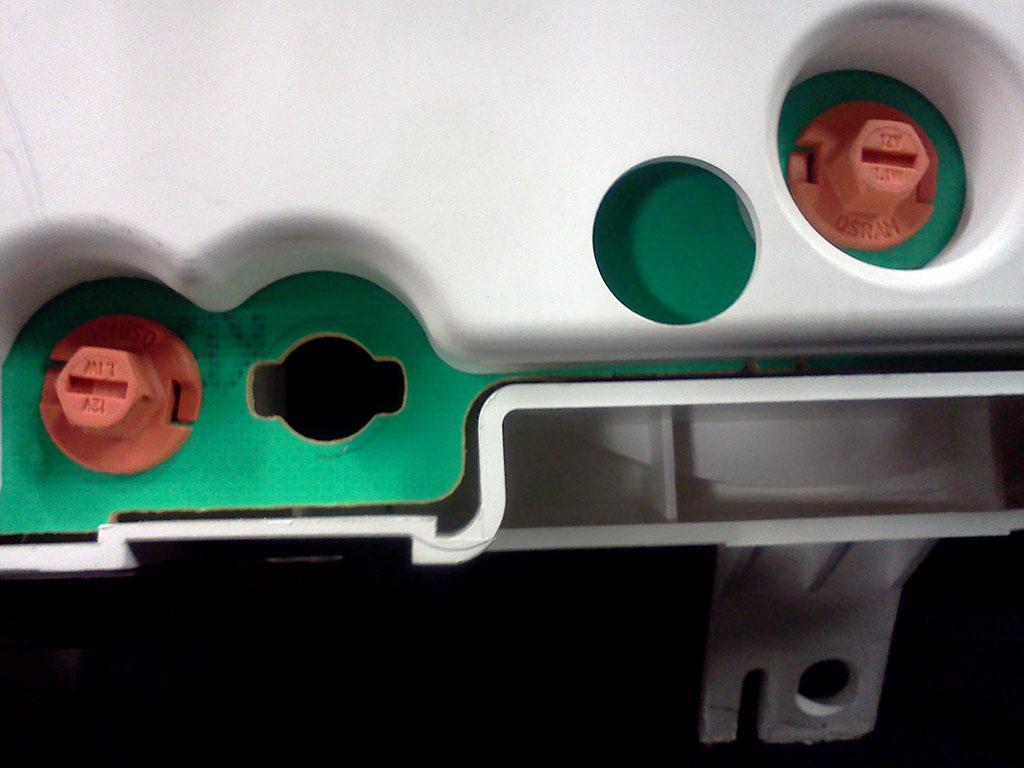 These bulbs are not sold separately from the dealer; you have to buy the whole cluster. Moving forward with diagnosis, it didn't take long to verify powers, grounds and data lines to the PCM/TCM, and they all tested okay. The TCM side of the PCM/TCM unit itself was apparently dead.

The hardest part of this diagnosis so far was finding complete information within the wiring diagrams and service information. The pulse generator in the transmission only appears in the power distribution and computer data line schematics; if I hadn't already known its function, I would have had a very hard time finding it and description and operation of that component is virtually non-existent. The pin and wiring assignment for the DLC is backwards (like a mirror image) and some of the pin assignments and wire colors at the PCM were wrong. This seems to be a somewhat common issue. If you've spent much time looking at the O.E. service information, you would know it can range from very frustrating to downright hilarious. If you see something that looks wrong, it very well may be. Double-check it against another source - it does happen more than infrequently.

The used car lot that brought us this jewel was a pretty good customer, but had a reputation for wanting to fix the bare minimum as most car lots do. As expected, all he wanted to do was make it shift. In fact, he showed up just before closing time with a used PCM/TCM unit in his hand. Installing a used module is usually a crap shoot - I don't recommend it - but we told him we would give it a try. We ordered a speed sensor, but finding a connector pigtail was a different story. Hyundai/Kia, like Nissan and a few other OEMs, don't offer connector repair replacements. You would have to buy the whole harness, kind of like the bulb in the cluster. I have sourced those bulbs in the aftermarket before, but wiring pigtails are slim pickings. We ended up having to send one of our guys to a salvage yard to clip one off of a donor vehicle, and charged accordingly for it.

After our parts arrived and were installed, the Sonata shifted normally, but did set a code - P0630 - for VIN programming error. You would've never known it because of the missing check engine light bulb. We possibly could have resolved that issue with a reprogram of the PCM, but as expected, the customer didn't want to spend any more money than necessary to get it rolling. It was somewhat of a challenge getting through the service information, but turned out to be a fairly easy and profitable job.

The shorted pulse generator created a situation that damaged the TCM electronics, and the vehicle was tampered with to hide the issue. Auction cars are often technical throwaways that somebody didn't want to deal with. You have to expect the unexpected. A little research and detective work go a long way in these cases.