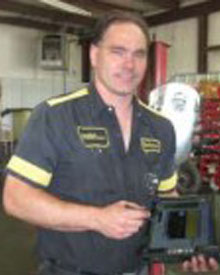 Recently, we sold a 4L60E to a neighboring shop. They installed it, but then they brought it back to us due to a P0753 shift solenoid A code. It would reoccur consistently and almost immediately when driving. However, the transmission would NOT go to failsafe mode (this is a key point).

I did a quick resistance check on the solenoid and it was fine, so I thought maybe it was a connection issue. I wanted to do some amp tests with a scope and amp clamp but I found it difficult to get to the circuit without opening the harness (which was far too much work). So, I just did the amp test at the transmission with a test harness plugged in. It was fine at 0.4 amps on the A solenoid. I checked the B solenoid for comparison and it was 0.4 also. This test is dandy but doesn't show you a problem with the wiring, connections or computer.

The best test would have been to drive it, measuring amps on the A solenoid wire between the solenoid and the computer, but since I couldn't find easy access to the harness, I decided against it. 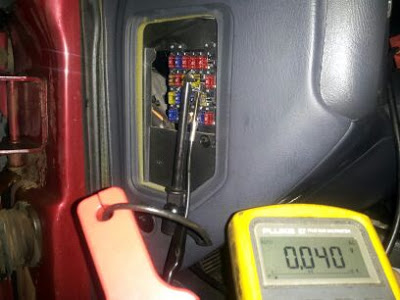 It is possible to jumper across the fuse that powers the solenoid (above) with a wire and put your amp clamp around that; unfortunately, there are other devices on the fuse that activate while driving. They draw extra current and create inaccurate readings. But, if you do the readings in the bay using bi-directional controls with the scan tool, the other stuff on the fuse isn't active. This is the way I chose to do it. 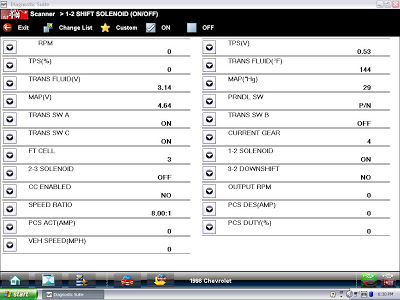 I measured amperage at the fuse while turning the solenoid on using bi-directional controls in the scan tool (above). This loads the entire solenoid circuit just as the computer does running down the road. This test was showing 0.4 amps on both solenoids, so I was pretty sure it was a computer problem. I called up the shop that installed the transmission and they said, "yes, the code was there before". This would have been nice to know upfront, but ok...

At this point, I knew the computer was capable of making correct amps and the solenoid, wiring and connections were all fine. The code was triggering but without tripping the failsafe. It was looking like a bad computer, probably in the section that makes the decision whether or not to trigger the code. Usually a computer failure that creates a solenoid code would be in the amp driver. But since this transmission continued to work even after the code triggered and the computer could flow correct amperage in the bi-directional test, this makes it a logical decision to try a complete computer replacement.

After installing a new computer, quickly reflashing the system and completing a not-so-quick 30 minute anti-theft relearn, the problem was fixed. So, with very little time invested in the diagnosis this car was fixed. I spent more time thinking about it, worrying about misdiagnosis than actually testing it.