A growing trend that we have been seeing at all of our repair shop locations involve vehicles that are brought to us when a customer is referred to us by a general repair facility, or brought to us directly by the repair facility for diagnosis. In all cases, the shops are convinced that the vehicle either needs a transmission replacement, or that they feel the vehicle symptoms indicate a problem with the transmission. We have all seen it before when a vehicle shows up with engine misfire that is perceived to be the transmission, or a locked up fan clutch that is making the transmission "slip" or not shift into the higher gears. These types of issues are not going away any time soon, and actually things are getting to be more common as vehicle systems increasingly become more integrated and dependent upon each other to make the whole vehicle work the way it was designed to.

The subject of this article is a 2007 Nissan Maxima that was brought to us from a shop that we do a lot of work with. They had initially called and wanted to see if we could point them in a direction on what to look at. The shop had stated the vehicle had code P0868 (secondary pressure down), but after the code was cleared, it had not returned yet the car was still acting up. It would cut out and go into limp mode. I had asked about any other codes in other systems and they said it had a C1109 code (battery voltage out-of-range) in the ABS module, and the battery had been replaced a few weeks ago. I told them to make sure that the charging system was working properly and get back to me with what they had found.

The next day the Maxima was dropped off after the shop said they had checked out the charging system, so it must be the transmission. The shop uses the same Midtronics analyzer that we do and it has been pretty reliable. After verifying the issue, I started my standard evaluation. I follow the same procedure on every vehicle: check the transmission fluid, check the engine oil, use the pre-scan function on the Zeus workstation to scan all modules on the vehicle, and then check the battery and charging system. My test of the battery/charging system passed, lining up with what the shop had reported. I did pull the same C1109 code that was stored in the ABS module, but the P0868 had still not returned.

I then headed off for a road test. For most of the test drive everything was working well until I got about three blocks away from our shop. When accelerating from a stop the car just acted like it shut down. Throttle input was lost, and then it came back for a second, and then dropped out again. It had gotten so bad that I pulled off into a parking lot and walked back to the shop thinking the vehicle would not make it back on its own.

I checked out a few other vehicles at the shop and then went back to see if I could get the Maxima to make it back, which I did. I scanned for codes again and the C1109 was in the ABS module again. I wondered why the ABS module was the only module to set a code, but the issue seems to be affecting the transmission? I figured that I would just go to the source and monitor the battery voltage at the battery thinking that if anything, I would lose charging voltage due to a bad alternator. What actually happened was entirely different, however.

The voltage shot up past 19 volts on the meter. If you look at the results (FIG 1), each time the voltage goes down to a proper level the RPMs on the engine go up, and when the voltage goes high we lose throttle and the RPMs come back down. That screenshot was the most consistent example I had saved, and it also seemed to happen more consistently when I was accelerating heavier at lower speeds. When I got back to the shop I started doing a visual inspection thinking that the engine torque (torsional movement) was somehow affecting this. 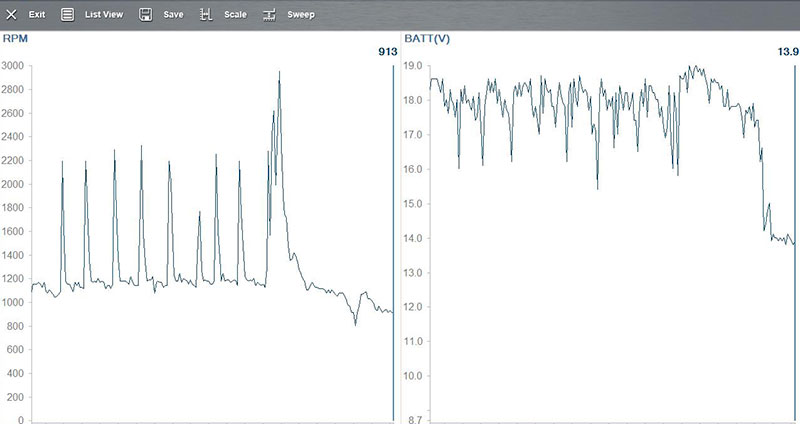 I spotted a two-wire plug on the alternator that did not quite look right. (FIG 2) When I went to unplug it to check terminal fit and to make sure it was not corroded, it simply pulled right off. It was not plugged in all the way! We use a product called Deoxit for electrical connections. It has done a really good job for us for cleaning corrosion, and it also improves conductivity, so I sprayed some of that on the connector and plugged it back in making sure that the locking tab was engaged and went off for another road test. 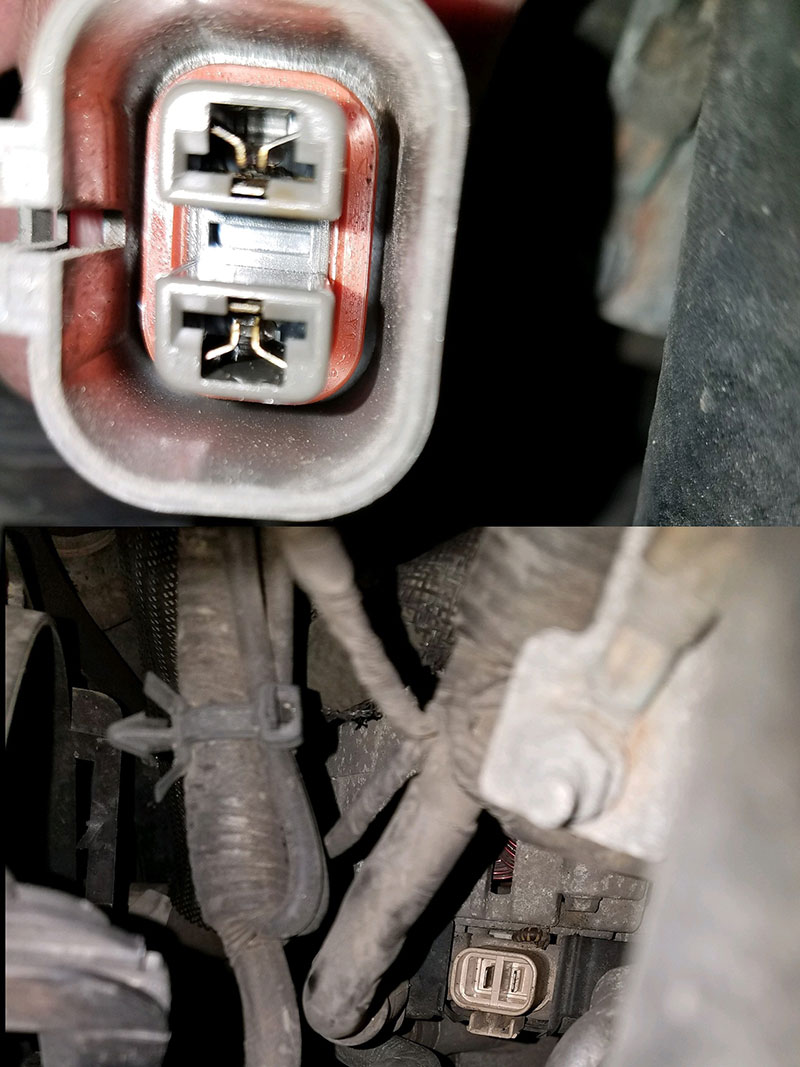 Everything now was working well with voltage stable and no more cutting out and losing the throttle. I also did an extended road test to see if the transmission code would return and it did not. We called the shop and told them what had happened and what we did, and they were really surprised at the results and wanted to pay the diagnostic charges so their customer did not have any expenses. They called the customer to let them pick up the car directly from us and they were extremely happy that they did not have the expense of replacing the transmission.

It has been a few months since this happened so I had the service advisor call the customer just to see if everything was still working well, and I'm happy to report that no transmission issues have arisen everything was still working as intended. It's important to think about all of the conditions that are occurring when an issue exposes itself. In my case, it was the movement of the engine that was making the concern intermittent and elusive. That was the clue that helped crack the case.