Scope is a Valuable Diagnostic Tool 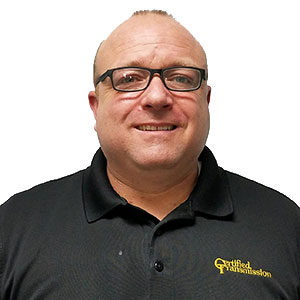 Kevin is a Diagnostician at our Liberty, MO Certified Transmission location. He has been with the company since 2014. Kevin has been in the automotive field for 24 years, specializing in engine, transmission and electrical diagnostics. He is an ASE Certified Master Technician with L1 advanced level diagnostics certification.

There was a time in my career when replacing a computer was touch and go. I always tried to do my due diligence and eliminate everything else as a possible cause before replacing the computer, but sometimes that was not enough, and I would miss something along the way. That was long before I learned how to utilize a scope to see what was happening with the system I was working on. A scope is a powerful diagnostic tool. Lately, we have seen our share of ECMs and TCMs failing, and the following stories are examples of such computer failures and how using a scope in the diagnostic process helped determine the cause.

The scope was not the primary tool to diagnose this vehicle, although I did use it to verify data. It was presented with the following concern: "Vehicle would downshift on the highway and the A/T light would come on."

This vehicle was not setting any diagnostic trouble codes. On the initial road test, the concern did not reoccur. At this point, I drove it one more time with the scan tool connected. After a long drive with the transmission at operating temperature, it downshifted abruptly and then started working again. Since I didn't know what I was specifically looking for yet, I had almost all the available PIDs listed on the scan tool. I reviewed the movie and then narrowed down the PIDs I wanted to concentrate on. While I was driving, I noticed the "run time" PID showed a little over two minutes. Wait, I thought, "I have been driving well over 10 minutes. What's up with that?" I pulled into a parking lot and studied the movie. That's when I saw what was happening. (Figure 1) 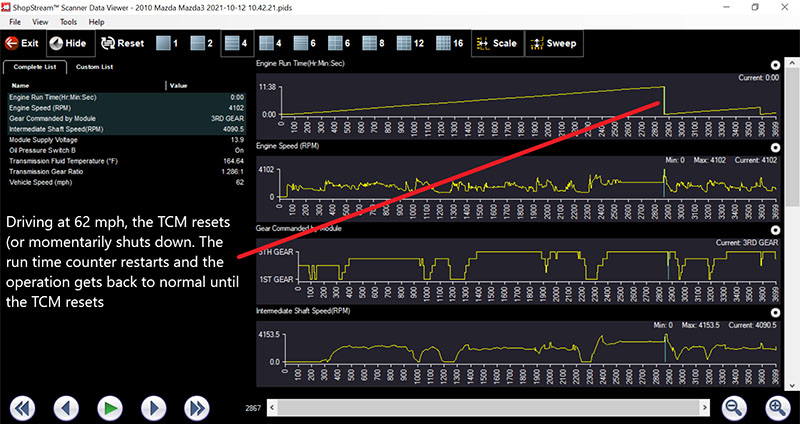 You can see the counter reset (this occurs a couple of times in this movie). When it did this, the transmission shifted from fifth to third gear causing the abrupt jerk sensation. The vehicle was traveling at 62 mph when this happened, so you could imagine the surprise and shock when it happened. Once the TCM was hot enough, the issue happened more often. Here you can see the TCM repeatedly reset or time out as well as the gear changes that occurred when it did. (Figure 2) 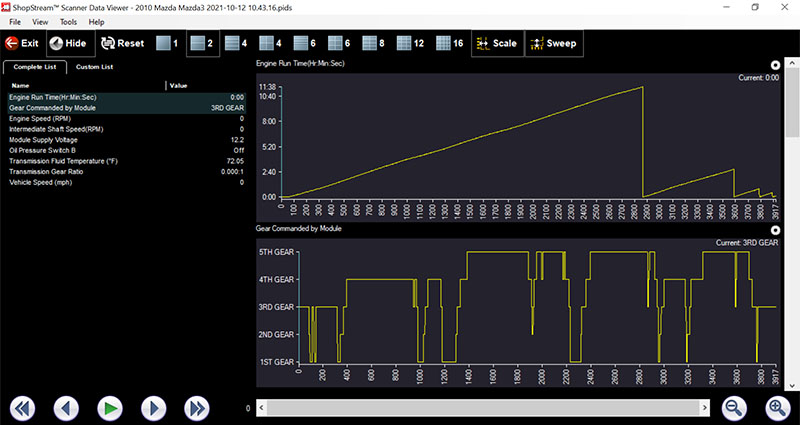 I scoped the powers and grounds to verify they weren't the cause of the issue. Both were functioning and steady. We then replaced the TCM, and the vehicle began working properly. Success.

Our second vehicle did require the scope for diagnosis and some extended time to identify, analyze, and determine the direction of repairs. This 2011 Mazda 3, 2.5 liter, with FS5A-EL transmission had the stated concern, "Vehicle will jerk and not shift. The A/T light is coming on." This one had stored a DTC of P0753 (SSA electrical fault). As usual, the vehicle did not act up or reset the DTC on the initial road test. The owner authorized further testing to find the root cause of the problem.

I connected my scope to the three shift solenoids to monitor their actions. I connected to as many similar solenoids, especially known good ones, to get a clean performance comparison. Since this vehicle was not setting the code cold, I performed a KOEO self-test. This gave me a good idea of what patterns to expect when it was operating correctly. (Figure 3) 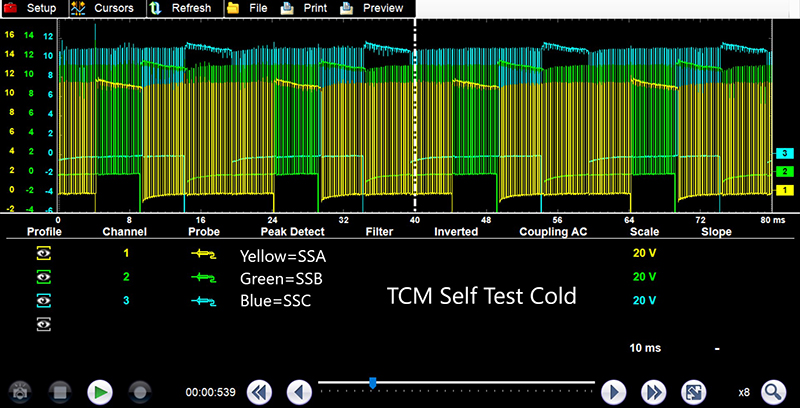 All three solenoids presented a good waveform, so I knew what to look for. At this point, I was ready to drive the vehicle with the hope that once it got up to operating temperature it would act up and set the code.

After about ten minutes of highway driving the vehicle started to act up. I pulled into a nearby parking lot and performed a bilateral test on the solenoids. I chose SSA to start with since that was what the code pointed to, and sure enough, there was a breakdown in the circuit with SSA when commanded 60% duty cycle. (Figure 4) 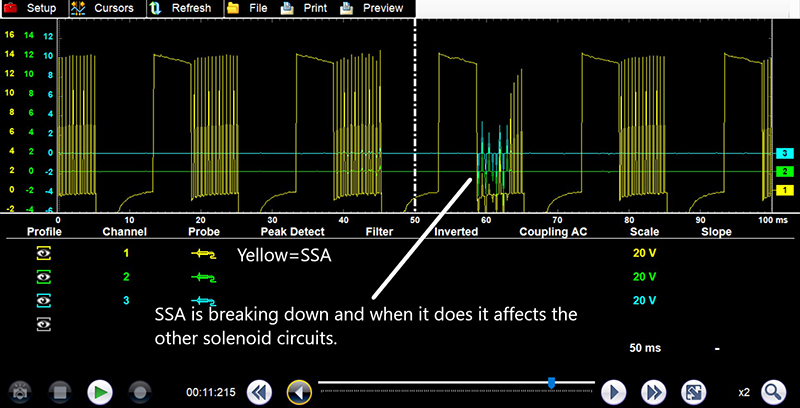 It was also affecting the SSB and SSC circuits. I then went on to test SSB. SSB was working, but I noticed an anomaly that sparked my attention. (Figure 5) 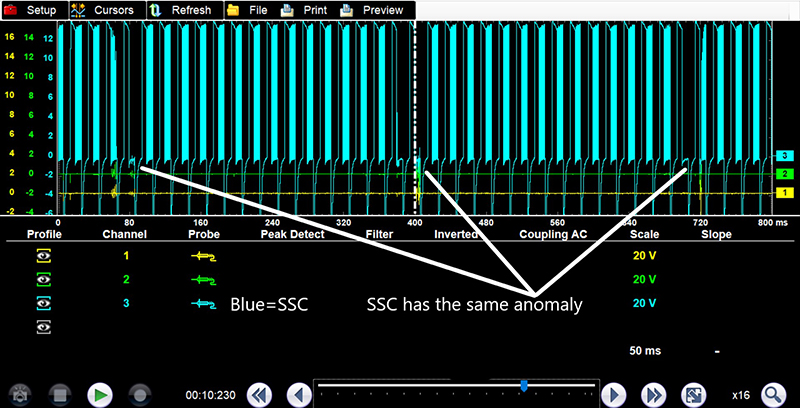 The breakdown in the circuit for SSB was like what I saw on SSA. Now turn your attention to what SSC looks like. SSC was working also but had the same anomaly as the other two solenoids. I went back to the shop and performed some pinpoint tests. My original theory was that there was a problem with the TCM as failures on these vehicles are high. Once I got back to the shop, I accessed the TCM and started with powers and grounds. I didn't think it was a power problem since there was a function, albeit not the correct function.

I thought it might be a ground issue, so I voltage dropped the grounds and found they were acceptable at 0.04v. The vehicle was still near operating temperature, so I performed a resistance test on all the solenoids. The shift solenoids (PWM) were all around 2.6 Ω (1-4 Ω spec), and the on/off solenoids were around 13-15 Ω (10-26 Ω spec). At this point, I didn't feel I had an issue inside the transaxle and suspected the TCM instead. I ran through the self-test on SSA again and got a flat line on the SSA and I was confident we had an issue with the TCM. (Figure 6) 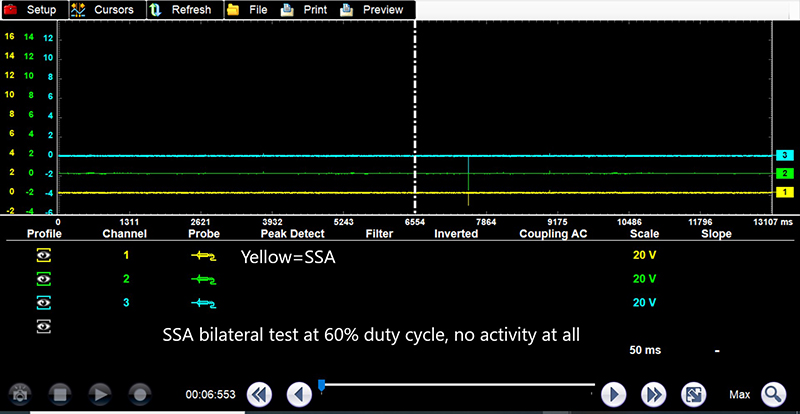 We replaced the TCM with an OE unit from Mazda, and the transmission worked flawlessly.

The scope becomes a powerful tool when evaluating the electrical performance of both components and wiring. Visual queues and comparisons allow us to "see" what's happening when electrical signals are applied. Taking the guesswork out of diagnosis makes us all better technicians, and fixing it right the first time is everyone's goal.