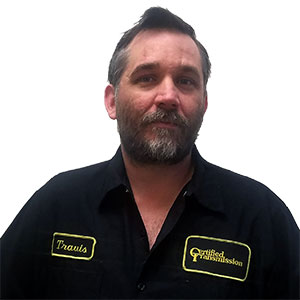 Travis has been in the transmission business since 2003. He is from Topeka, KS and got his start at his dad's shop sweeping floors. He came to Certified Transmission after 10 years as a transmission tech at a Ford dealer, and he has the A2 and A3 ASE Certifications and is working on more.

A customer showed up at our shop with a 2008 Chevrolet Impala SS that was equipped with the 5.3 LS engine and a 4T65E transmission. The customer had a complaint of an erratic speedometer while driving. I began by collecting all the vehicle information for a check out sheet, such as VIN, mileage, engine, and transmission type. After filling out the vehicle information section I set about to begin my diagnosis. First I checked codes and found the vehicle had no transmission or engine codes, but it did have a RF wheel speed sensor code which did not seem likely to cause the problem, but I kept this in mind anyway. I was suspecting a possible output speed sensor issue or maybe even an instrument cluster issue.

I set up my scanner to monitor certain transmission PIDs such as TCC duty cycle, TCC slip, gear command, RPM, and the output speed sensor (among others) and set out for my road test. At first the vehicle did not act up and I was starting to wonder if it even had a problem. After a couple of miles, sure enough the speedometer jumped back and forth a few times spiking as high as 60-70 mph just shortly after beginning to move; no way could this be correct. Every time this happened was when I took off from a stop, and this was a pretty good clue for me.

This told me I likely had a short somewhere and when the engine torqued it would cause the short and the malfunction. With this information in mind I returned to the shop and attempted to duplicate the issue by power-braking the vehicle quickly while in gear. Sure enough, I was successful in replicating the issue in the shop. You can see on the attached screen shot of the scanner when the problem occurred. (figure 1)

The vehicle speed PID goes from zero to 23 MPH instantly and the output speed sensor goes from 0 to 1010 RPM at the same time. I wanted to rule out possible interference from the alternator so I ran an electrical system check and ripple test which is standard operating procedure here, and no problems were found with the charging system. After this I decided to raise the vehicle and start looking for other possible causes. In the past I have seen internal transmission failures that drop large amounts of metal debris. This debris will stick to an output speed sensor and cause erratic readings of the output speed sensor.

I unbolted the speed sensor and pulled it out of the case and it was clean with no signs of concern, so I reinstalled it and started looking elsewhere. I always like to do a very good visual inspection before I break out the DVOM and do electrical checks. Many times I have found a concern with just the solid visual inspection. I started to follow the wire harness from the sensor back to the PCM. I noticed the plastic conduit surrounding the harness near a metal bracket on the transmission that secured the harness in place had deteriorated and fallen off. (figure 2) 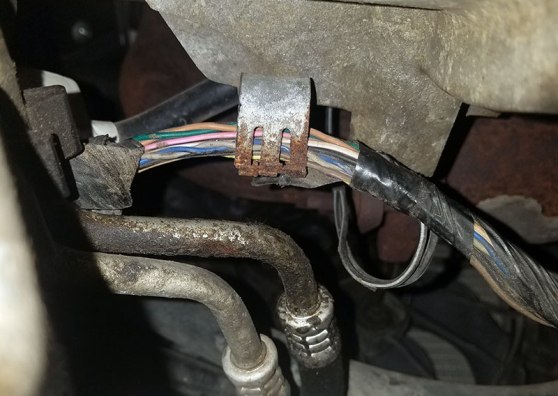 I knew I was onto something with that discovery, and upon closer inspection I discovered a couple of wires had been chafed through the insulation and bare wires were exposed and grounding on the metal bracket. (figure 3) 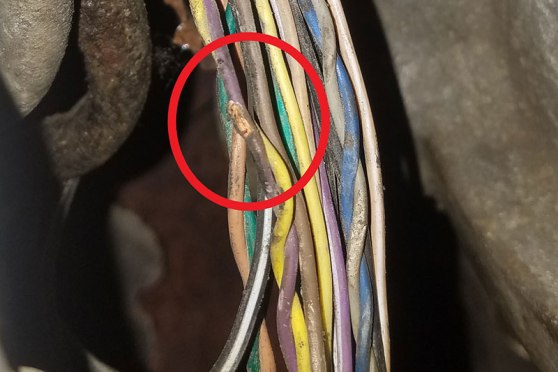 Next I set off to identify these wires hoping to find they were a part of the output speed sensor circuit. I pulled up a wiring diagram for the output speed sensor on this car and identified the circuits as being a purple wire and a yellow wire as a twisted pair. With this information I went back to the car and as you can see in the picture, I had a chafed purple wire in a twisted pair with a yellow wire. This was certainly my problem. With my diagnosis complete I turned in this information to the service advisor to sell the work. The customer was happy to hear it was likely a simple problem and gave us the authorization to repair the wires and recheck.

At the initial inspection we did a pan inspection and the pan was clean and just had some old-looking fluid inside. We serviced the transmission and set off to repair the wire. We repaired the chafed wire and wrapped it back up with electrical tape and put some new conduit around it to protect it and prevent this from happening again, then secured it back in the bracket. With the service and repair complete and everything buttoned up, I set back off on a post-repair test drive to see if the problem was fixed. Everything worked as designed and the speedometer never exhibited a glitch again. I was happy with this so we notified the customer that his car was ready to pick up. The customer was eager to get his car back and get on the road with it.

We waited a couple of days and gave the customer a follow-up call to see how things were going with the impala. The customer was very happy and reported the car was working great and has not acted up since. The moral of this story is to never under estimate a good visual inspection. I have found many problems without the need to go into in-depth testing simply by looking around and paying attention to the small details such as plastic conduit that has fallen off a wire loom.