We've all had to chase intermittent vehicle issues. What makes them so challenging is that you can't fix what you can't see. Sure enough, it always seems that the concern disappears when you're trying to diagnose the issue in your bay.

This story is a similar case. We were diagnosing a 2002 Dodge Grand Caravan with a 604 transmission, and 3.8L engine. Six months prior to the customer's visit, the vehicle owner contacted us and said that the transmission would not shift, and was starting off in 2nd gear. By the symptom description, the unit was likely going into failsafe mode. We scheduled an appointment for him, but the customer was a no-show.

Prior to his visit, the vehicle started to act the same as before. Presumably, he did not come in when the previous appointment was scheduled since the issue had seemingly corrected itself. The vehicle showed up unannounced and was waiting for us on a Monday morning. The owner called that morning to let us know what had happened.

Since the problem had disappeared, the customer had decided to just continue driving the vehicle until the problem occurred again. The problem did return and this time it would not clear up on its own. The customer stated that all of the indicator lights were now illuminated, also.

When I pulled the vehicle into the shop I verified that the indicator lamps were all illuminated, just as the owner had stated. Preliminary inspection uncovered a transmission DTC stored in the TCM, P0706 Check Shifter Signal. I thought at the time that this might be a simple fix.

This was the first time I had encountered this code. I documented the codes and then cleared them. Road tested the vehicle and rechecked the codes when I finished the road test. No codes reset. I parked the vehicle outside to come back to it a little later. When I pulled the vehicle in again, only code P1698 had reset. I needed to research everything I could about this code, plus get all the wiring diagrams for it. I really needed to understand the system and what this code was telling us.

The areas I concentrated on were the power supply to the TCM on pins 11 and 56, the grounds on pins 53 and 57, connector damage at the TCM, and the Programmable Communication Interface (PCI) bus wire.

The owner authorized the diagnostic time and I plunged in feet first. Armed with what I'd learned from my research, I hooked up my scan tool and my Digital Multi Meter (DMM), and turned the key on. To my surprise everything was working correctly. In fact, it worked correctly for the next several days. What would I do if it didn't reoccur? Would I return the vehicle to the owner and see what happens? I wanted to be thorough, so I chose to dig a little deeper to see if I could find something.

During testing, there was one subtle piece of information that I noted during the voltage drop test: the voltage on Pin 11 at the TCM connector was 11.89V. Battery voltage was 12.37V.

The Pink/White wire from the IPM (Integrated Power Module) connector C3 pin 2 tested .5V less than battery voltage (it was always .5V less than B+). I removed the FCM (Front Control Module) and powered up that circuit. I applied fused B+ to pin 27 of the IPM and tested the current at pin 11 (Figure 1) of the TCM (circuit loaded, .1A). Relay clicked on and there was B+ voltage at Pin 11, and no voltage drop. What did this tell me? The circuit is good but the FCM is supplying .5V less than battery voltage. Unfortunately, I could not find what that voltage specification is supposed to be. The OE test says to, "Use a test light connected to ground, probe TCM connector Pin 11. If test light illuminates brightly, go to next step. If it does not illuminate brightly, repair open in wire." What kind of circuit test is that? My definition of bright may be different than yours. 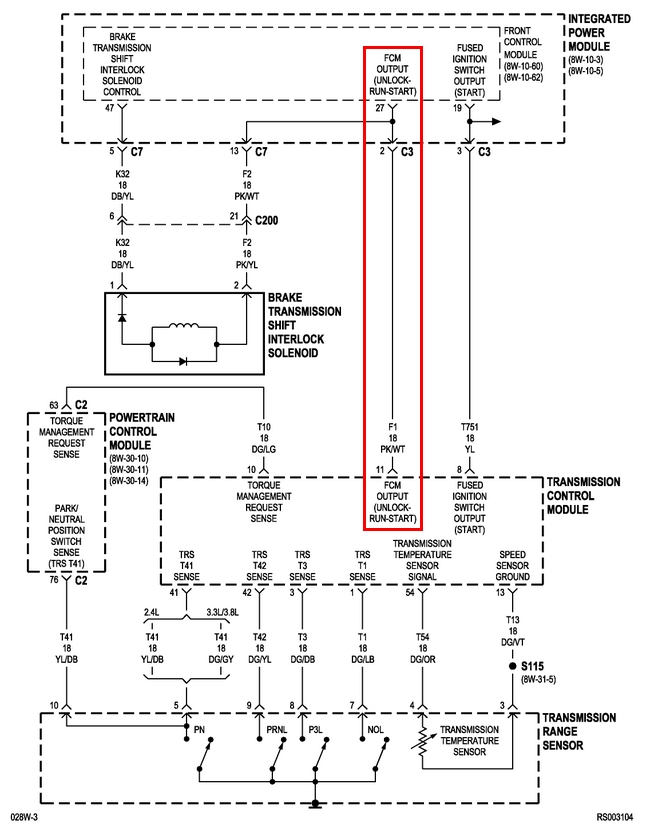 The one time I was finally able to produce the error with the DMM attached, I saw that there was only 0.78V at Pin 11 and the indicators were all lit up. At this point, it was important to see if any there were any communication issues with any other controllers. If not, the cause would likely be a BUS communication failure. If there was no communication with the TCM only, it needed to be determined if it was the TCM, or FCM.

I scoped the PCI bus wire with the TCM connector unplugged. It should have had 0-7.5 volt signal coming from the other modules if the wire is good. The TCM was the only module with no communication. I went back over my process, tested all of the grounds, and concluded that the FCM was at fault. The FCM was replaced and programmed. After the vehicle was road tested several more times over the next few days, it was delivered back to the customer.

Intermittent problems can drive a tech crazy, and sometimes you're tempted to just throw parts at it. A top notch technician/teacher once told me, "If you can't prove the part is bad, don't replace it." Well I could prove everything else was working so it left me with the conclusion the FCM must be at fault. In any case, attention to detail and process of elimination are the keys to finding intermittent issues like this one.