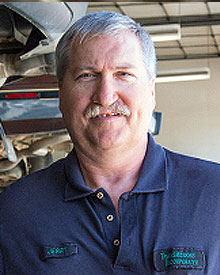 Jerry has been in the transmission industry for more than 25 years, with experience in diagnosing, rebuilding and installation of many types of transmissions. He has a degree in automotive technology from SCC Milford and also has attended many automotive seminars and classes. He is also an ASE Master tech.

When I was asked to write this article I thought, "What vehicle should I write about?" Instead of choosing just one success story that applies to one vehicle, how about writing something that applies to all vehicles? The thought that I want to convey is to pay attention to the simple things and small details alike, both when diagnosing a problem, or when removing and installing a transmission.

With today's vehicles we all know that all of the various subsystems work together to make the vehicle perform properly. Scan tools are a must with computer controlled vehicles, but common sense may play a more important role than meets the eye. Our company has multiple locations, but my shop is responsible for diagnosing and repairing wholesale sales warranty issues. These vehicles come to us from other shops that we have sold carry out transmissions to. I am directly involved with these repairs.

What I often see is that the transmission is not the root cause of the issue, but instead it is the vehicle that is causing the concern. I'd like to share some examples of things that I have discovered while diagnosing these "warranty" concerns.

Buick Le Sabre
The customer that called us on this car felt that the transmission was going to blow apart because of the violent shifting that was being experienced. The first step in all of my diagnostic processes (after verifying the concern) is to check the basics first, and that is how this problem was found.

I started with an electrical systems evaluation. What this revealed was that the charging system was running at 18 volts. Knowing that this overcharging condition wreaks havoc with the transmission's electrical components, I unplugged the alternator and the transmission worked perfectly. The fix in this case was to replace the PCM since the charging system output is directly controlled by this module, and wasn't doing its job. One can only guess if the original transmission really needed to be replaced or not.

Isuzu Trooper
This one came to us with erratic shifts. An electrical check along with a visual inspection of the vehicle made it apparent that this truck had seen its share of corrosive elements. The challenge with this vehicle was that the concern was intermittent, so based on an educated guess and a dose of intuition I installed an extra ground strap directly to the transmission case and the erratic shifts were gone. The key here is that this was a simple repair to try and should really be done with every transmission replacement in these vehicles, as it is a common concern.

Ford Bronco
A car dealer installed a new 4WD switch and transfer case shift motor to fix a "4x4 inop" concern. After performing the basic vehicle electrical system checks, I started diagnosing by checking power to both the 4x4 switch and 4x4 controller. No issue there. I then tested for a voltage signal from the switch to the 4x4 controller; so far so good. Now it was time to check the voltage signal from the 4x4 controller to the transfer case shift motor, and there was NO signal. I hadn't mentioned that this vehicle had been completely restored inside and out, but after tracing the wiring and pulling the drivers seat from the vehicle I discovered that when the seat was installed during the restoration, the seat bolt caught the t-case wiring harness and ripped it apart. This was a simple case of the dealer technician simply replacing parts and hoping to fix it, but instead repairing the wiring was the solution. Shall I go on? Okay.

Ford F350 4WD
This final vehicle was the story that inspired me to write this article. The 2001 Ford F350 4WD dually was towed in from the local interstate, and per the customer it quit moving. This is the most damage I had ever seen on a vehicle that was created from a minor cause due to a major oversight. The front drive shaft U-joint broke apart and started a chain reaction of damage that nearly totaled the vehicle! The transmission, transfer case, wire harness, fuel lines, brake lines, frame and under body all sustained some level of damage. Because of this damage, the vehicle stalled and lost its brakes while pulling a loaded trailer. It wasn't clear as to whether the R&R tech missed a bad u-joint or installed one incorrectly, but the one thing that is known is that this customer was left with a very expensive repair because a simple item was not checked or repaired properly.

I have seen PCM'S and TCM's fix vehicles when a replacement transmission did not. There are many other examples I could go into, but I think you get the point. I guess we all think everything is so complicated, but if we just check and take care of the basic things our lives (and our customer's) would be made a lot better. I know some of us have worked in this industry for so long that we can do it with our eyes closed, but maybe we should work on keeping them wide open to keep the customer happy, and earn more repeat business.